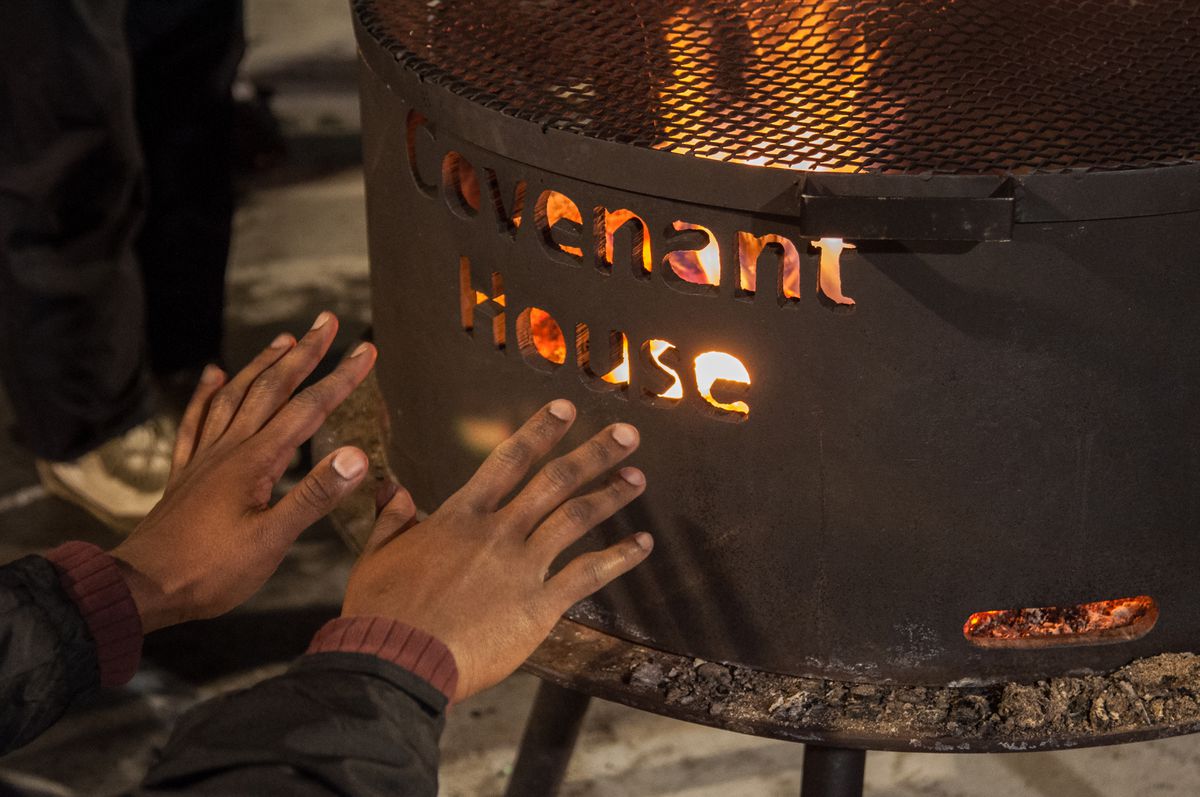 In 2013 Covenant House Alaska celebrated their 25th anniversary of supporting youth in crisis with the grand opening of a new facility at 755 A Street. The building is large and spacious, with a secure entrance in the alley between 7th and 8th Avenues—away from the speeding cars of A street. There is a patio garden, where residents can step outside for a breath of fresh air. Throughout the building there is an emphasis on art, and it’s full of vibrant colors and communal spaces. The facility feels more like a college campus, with a dining hall, music room, game and media lounge, and even a donations-based clothing boutique, where youth embarking on interviews can “shop” for professional attire.
The Youth Engagement Center is open 24 hours a day, 7 days a week, 365 days a year. There are 60 beds available to those seeking shelter overnight, and struggling youth can also drop by for a bowl of soup, a shower or laundry, depending on their needs at the time. The facility serves youth ages 13-20. There are also two transitional living programs, Rights of Passage and Passage House.
Homeless youth in Anchorage face many challenges. Josh Louwerse, the Youth Engagement Program Coordinator for Covenant House says that these challenges are often compounded by the community’s lack of engagement, understanding and interest.

My dad took my Xbox away. My curfew is too early. I have to do my homework before I go out with my friends.
Some people believe that these are reasons kids run away and that ending homelessness is as simple as deciding to quit whining and go home. “If that kid shows up, we either tell them to go back home, or if we need to, do a 3-day cooling off period,” said Louwerse. But the youth that do show up to Covenant House are there because they are out of options.
“We’re the end of the road,” said Louwerse. “If somebody gets to us, they have fallen through a lot of gaps to get here. And a lot of people have either tried to do something and it didn’t work, or they just didn’t and that youth got here.”
Louwerse said that about 40 percent of the youth served at Covenant House have a mental health diagnosis. “Their family couldn’t care for them the way they needed to be. Their behavior was out of control because they weren’t medicated, or they didn’t like the meds.”
Some of the other youth are there briefly, as they get back on their feet after facing a temporary setback and losing housing. But the majority of the youth that seek refuge at the facility are leaving horrible situations. “They’ve been abused, they’re being abused, they’re living with addicts, they are deciding that to not know where they are going to eat, not know where they are going to sleep, not know if they’ll be safe, is better than living where they live.”
“So they’re fleeing that, and they’re landing in the street. And they’re finding a family of youth who experienced the same thing. And they’re trying to survive,” said Louwerse.

The staff at Covenant House have adopted the practice of trauma informed care. Jason Searle, Covenant House’s Associate Program Coordinator of the Education and Employment Department, summarized this philosophy by saying, “Instead of just looking at trying to stop those negative or challenging behaviors, looking at them as a symptom of a deeper cause or reason that these are manifestations of things that people have experienced and things that they’ve learned along the way.”
“We are in a place where we ask the question, ‘What happened to you?’ not ‘What did you do?’”

More than a warm bed and a meal

According Searle, there are nine agencies with office space located in the Youth Engagement Center. They offer classes, workshops, education and career counseling, drug and alcohol treatment and more.
“It’s really a lot of things that most people would recognize as being necessary to be successful that you’re not necessarily taught in school,” said Searle. “A lot of people might learn this just from observing positive role models as they’re growing up.”
The goal, said Searle, is to give people new information, new skills and new opportunities so they have a better chance at success and independence in the future.
“I hope that they leave with the skills and knowledge and concept of themselves that is strong enough for them to be independent and successful and have a pleasant future for themselves.”

How to Get Involved

“Oversimplification of complex issues causes people to be marginalized. Our youth are marginalized—pushed away, ignored—because people want to simplify a complex issue to, ‘It’s just their fault.’ And if it’s ‘just their fault,’ then we don’t have to deal with it,” said Louwerse.
So what can the public do to understand the complex issue of youth homelessness? Louwerse offers this advice: “To start, adopt a posture of learning and listening. And don’t assume that you know what’s going on with somebody just because you see them. Get educated. Learn about homelessness. Read. Go volunteer. Volunteer at the soup kitchen or at Beans or at Covenant House. Get some people in your life who have been homeless and listen to them because once you start to learn about what’s actually going on from someone who has experienced it, that’s what starts to change your mind.”
And Louwerse suggests there are more ways to get involved and they can start in your own neighborhood. “Part of the reason these youth are homeless is because they didn’t have a support system. So volunteering at the Boys and Girls Club, or getting involved at your kid’s school,” are ways you can help.
“Anytime you step in to support a youth who is in a hard place, whether they’re homeless or not, is a step towards solving the problem,” he added. “Because it would be far better if they never made it to homelessness.”

This article was originally published in The Youth Issue of 61°North Magazine. Contact the editor, Jamie Gonzales, at jgonzales@alaskadispatch.com with questions or comments.