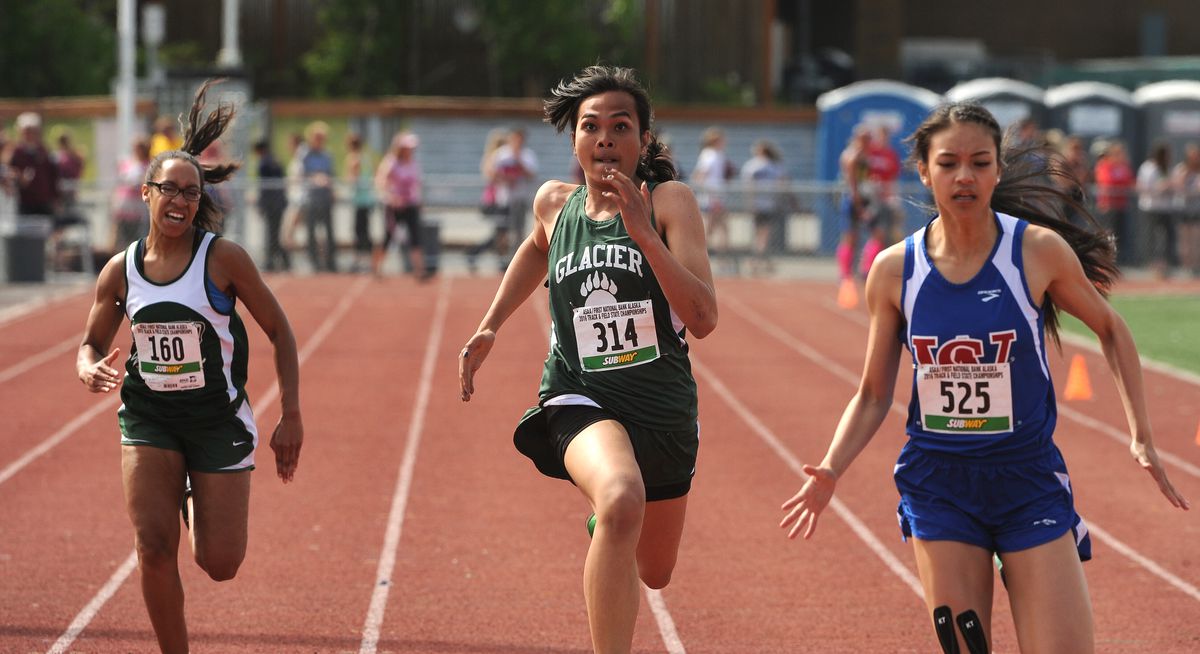 In what is believed to be a first for Alaska, a transgender athlete competed in an individual event at a high school championship Friday at the state track and field meet at Dimond Alumni Field in Anchorage.

Nattaphon "Ice" Wangyot, a senior at Haines High School, qualified for Saturday's finals in the girls 100- and 200-meters.

Wangyot was among hundreds of students competing on the first day of the championships.

Alia Bales, a freshman from Homer who watched the heats Wangyot was in, said she didn't know a transgender athlete was competing.

[Transgender student in Southeast Alaska sets her own path]

Few would have. Tall and lean with long black hair and an easy smile, Wangyot didn't look much different from any of the girls she raced against.

Wangyot, who graduated earlier this month, moved from Thailand to Haines in the summer of 2014, the Chilkat Valley News reported.

She didn't compete in sports as a junior but joined three teams this school year.

When she competed in girls volleyball and girls basketball earlier this school year, her participation drew little notice.

But her presence at the state track meet – where Wangyot is competing in individual events – prompted Jim Minnery, president of the conservative group Alaska Family Action, to hold an afternoon press conference at Dimond.

About a dozen people stood in support behind Minnery as he spoke.

"We are here today as a voice from the community to ensure that female athletes are not denied the playing opportunities and scholarships otherwise available to them and to make the playing field even again," Minnery said.

"… Allowing students to play on teams of the opposite sex disproportionately impacts female students, who will lose spots on a track, soccer and volleyball teams to male students who identify as female."

Anchorage Christian senior Tanner Ealum is the defending champion in the 100 and 200, and she registered dominating preliminary times in both events. Ealum, who will run seven races in two days this weekend, said she wanted to wait until after her final event Saturday before commenting on the participation of a transgender athlete.

"I want to focus on my events," she said.

"If Tanner can beat her, anybody can have a chance to beat her," she said.

Less than three months ago, amid a national debate over transgender people's rights, the Alaska School Activities Association adopted a policy on transgender athletes.

ASAA's board of directors voted unanimously in April to accept the participation decisions made at the local level. ASAA won't make gender identifications and it won't entertain appeals from schools or districts that object to the decision made by other schools or districts.

In the event a school or school district doesn't have a transgender policy, the ASAA policy requires students to participate based on the gender assigned to them at birth.

The Haines Borough School District policy, as cited by the Chilkat Valley News, allows Wangyot's participation in girls sports: "For the purposes of gender identification for interscholastic activities, the district will consider the gender identity based on the student's consistent declaration of gender identity, their actions, attitude, dress and mannerisms."

"Unfortunately, in adopting a policy that allows students to play on sports teams of the opposite biological sex, the Alaska High School Activities Association strayed from the boundaries of Title IX," he said, referring to the 1972 federal law that forbids discrimination based on sex.

He said the Office of Civil Rights — the federal entity charged with enforcing Title IX – recently addressed the issue in a letter sent to school districts nationwide.

"Based on their interpretation, allowing students to compete under their gender identification should be enforced under Title IX," Strickland said.

The NCAA and the International Olympic Committee both allow athletes to compete based on gender identification, provided that athletes who were born biologically male but identify as female are undergoing hormone replacement therapy.

"I don't know what's politically correct to say, but in my opinion your gender is what you're born with," said Eagle River junior Peyton Young, who won the Class 4A girls 3,200-meter race.

"It's the DNA. Genetically a guy has more muscle mass than a girl, and if he's racing against a girl, he may have an advantage."

Kaleb Korta, a Galena senior who placed second in the Class 4A boys 3,200-meter race, said he welcomes Wangyot's participation.

"It's cool she's got the confidence to be here," he said.