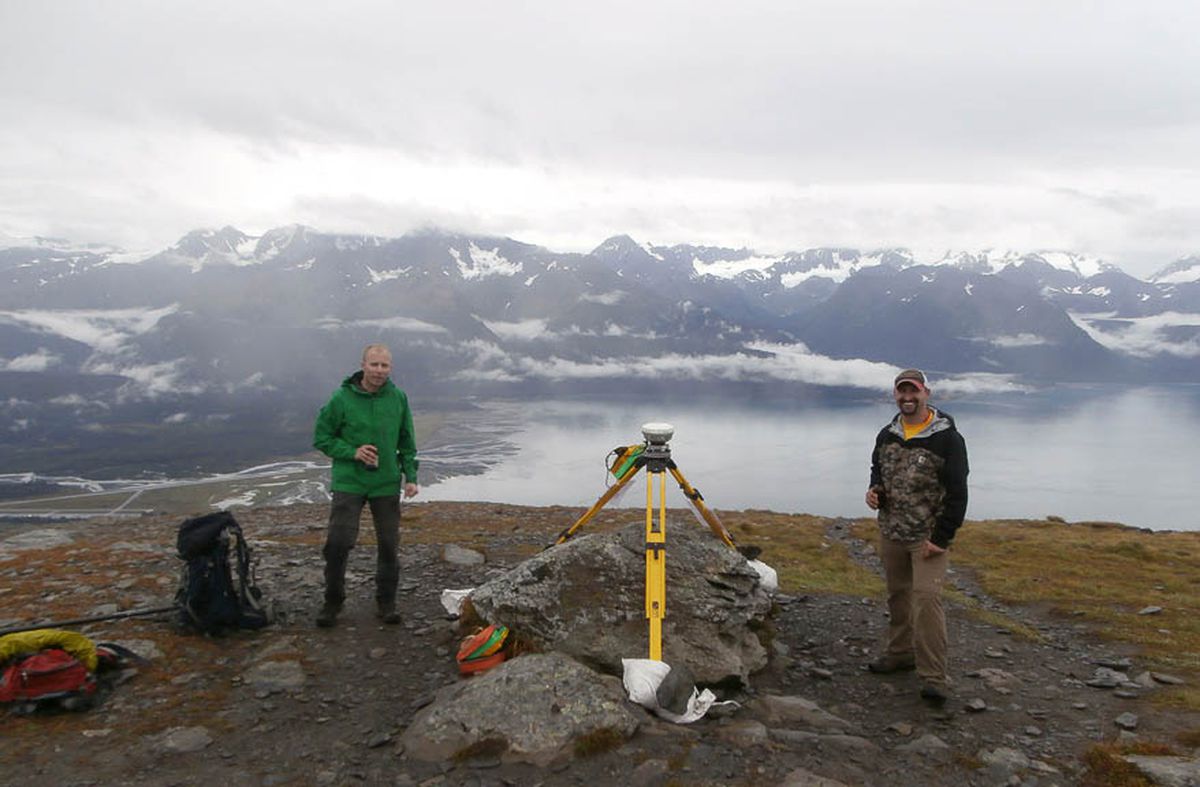 Eric Glaves, left, and Nate Rollin are two members of the four-man Mount Marathon Mapping Project that mapped and measured the iconic mountain overlooking Seward as part of their senior project in 2016.  (Courtesy of Eric Glaves)

Eric Glaves, left, and Nate Rollin are two members of the four-man Mount Marathon Mapping Project that mapped and measured the iconic mountain overlooking Seward as part of their senior project in 2016.  (Courtesy of Eric Glaves)

The four UAA students invested hundreds of hours of work and collected a dizzying amount of data about Mount Marathon in the course of roughly 18 months, yet they understood many folks were likely to pigeon-hole their senior project down to four digits.

And they were cool with that.

Sure, they mapped Mount Marathon's myriad braided trails, which had never been documented so thoroughly. And their three-dimensional model, complete with fly-through video, aims to enhance safety, and search-and-rescue efforts, on the beast overlooking Resurrection Bay in Seward. Plus, their data will be useful as a baseline for future study of, say, erosion on the mountain, which to this point has largely been anecdotal.

Still, Mount Marathon, which hundreds of racers labor up and rocket down every Fourth of July, in the oldest, most celebrated mountain race in Alaska, is cloaked in the iconic mystique of its elevation — 3,022 feet.

Racers who finish Mount Marathon receive a bumper sticker bearing the number long reputed as the elevation of race point, the huge rock racers circle before their descent. You've probably seen the stickers on no shortage of Subarus.

Thing is, the origin of 3,022 was a mystery — the UAA students could not find a source for it — and the accuracy was uncertain.

Thanks to the Mount Marathon Mapping Project — the work of Eric Glaves, Taylor Dosch, Nate Rollin and Murphy Quinn — we now know the verified elevation of Mount Marathon: 2,974 feet.

The revelation about elevation — that Mount Marathon is actually 48 feet shy of the long-cited number — drew oohs from the audience when the UAA students revealed it in a presentation at the school earlier this month. After the floor was opened to questions, chuckles followed one women's query:

"Are you guys going to run around with Sharpies and fix all those bumper stickers?''

The four guys in the Mount Marathon Mapping Project came up with the idea for their senior project as 2015 turned into 2016.

They were all surveyors pursuing bachelor's of science degrees from UAA's Geomatics Department at the College of Engineering. Geomatics is a discipline that incorporates land surveying, mapping and spatial data — and loads more. Among its many uses, geomatics is commonly employed in road construction, urban planning and environmental management.

The group figured measuring a verified elevation for race point on Mount Marathon would lure eyeballs to their Capstone Project — basically, a senior thesis — much the way the recalculation of Denali's elevation to 20,310 feet from its iconic 20,320 did a few years ago. Plus, their project involved real-world applications, like furnishing trail information, improving safety on the mountain and providing a baseline for future projects.

"We thought this would be a cool project to show what UAA students could do,'' Dosch said. "It was like, 'We can make a positive difference in the community, and this is how.' ''

The work was right up their alley professionally — all four men work as surveyors — and academically.

Glaves, 34, is from Houston, Texas. He's a full-time surveyor who already owned a bachelor's in history before earning his geomatics degree last week. He's insatiable about learning and has mused about law school — "I like to keep myself engaged.''

Dosch, 30, is from Indianapolis, and works as a surveyor. He spent eight years as an infantryman in the U.S. Marines and served tours in Iraq and Afghanistan. His four years as a Mountain Warfare Training Instructor helped spark his interest in surveying.

"I really loved being outside and navigating and using maps, route-planning,'' he said.

Quinn, 34, just graduated from UAA and is starting a job surveying. He was born in Anchorage and grew up in Eagle River, where he still lives. The Chugiak High grad did a couple of years in the Marines as a radio operator and stumbled upon geomatics one day when he was at the University Center, where UAA has an auxiliary site.

Rollin, 24, is originally from Green Bay, Wisconsin, and works as a surveyor. He had a two-year degree in civil engineering technology when he was recruited to work in Alaska in 2014. UAA is the only university in Alaska that offers a four-year degree in geomatics, and he bit. He's on pace to graduate next spring.

The group's "cool project" was also a demanding one — those hundreds of hours of work might have totaled more than 1,000, but no one tracked that figure — and it turned into a networking opportunity. The group was encouraged by its reception from the Seward Chamber of Commerce and the Mount Marathon race committee, both of which have emphasized improved safety on the mountain in recent years.

Kodiak Mapping Inc., a Palmer-based company that includes UAA graduates, furnished the Mount Marathon Mapping Project with the considerable undertaking of aerial imagery and contributed LiDAR data, at no cost. LiDAR (light detection and ranging) is a tool for measuring distance with lasers.

"We were happy to do it,'' said Isaiah Ditmer, lead LiDAR analyst for Kodiak Mapping and a UAA grad who serves on the geomatics program's professional advisory board. "It was a cool thing to contribute to.''

The Mount Marathon Mapping Project also was aided by Nicole Kinsman, the Alaska regional adviser for the National Geodetic Survey. The UAA guys view her as something of a rock star.

Kinsman attended the group's presentation of its Capstone Project, and gave the group high marks.

"They conceived, planned and executed a highly-precise and accurate survey of the summit of Mount Marathon in accordance with rigorous Federal National Geodetic Survey specifications,'' Kinsman wrote in an email. "What really elevated this project was how they sought opportunities to connect their work to broader needs.

"By working with the National Geodetic Survey, private industry and a local nonprofit, they have turned their University project into a valuable resource for Alaskans.''

The project required immense work, which killed a lot of weekends for the group members. Their labors included lugging equipment to the top of Mount Marathon several times. Three times they conducted observations on the mountain that lasted at least eight hours. Dosch spent one particularly cold, rainy night at the summit.

"It was like Seward knew I was in town,'' Dosch said, wryly.

And every group member spent enough time staring at his laptop to redden eyes. Basically, they took a senior project usually intended for a two-person team over the course of one academic year and broadened it into a four-man team that worked for roughly one and a half academic years.

"It's definitely snowballed into something bigger,'' Dosch added.

Those Mount Marathon bumper stickers — 3,022 — aren't going away. Too iconic.

Clock is executive director of the Seward Chamber of Commerce, which puts on the Mount Marathon Race, and she was totally on board with the mapping project.

Mount Marathon can be a dangerous mountain — on race day, on any day. Getting purchase on its surface of dirt, shale and scree can be an uncertain proposition, particularly on the downhill, which can be harrowing at high speeds. Injuries in the race are common, and recreational hikers who take a tumble occasionally warrant rescue.

Mount Marathon race rookies must sign a statement confirming they have practiced on the mountain. Rookies must also attend a mandatory safety meeting the night before the race, and the presentation includes a video of race carnage designed to scare a neophyte into reconsidering racing.

Race organizers intend to use some of the Mount Marathon Mapping Project's work in this summer's safety meeting and also post it on the race website.

"I think this project will not only help new racers, but can help veteran racers too,'' Clock said. "Any time new technology allows for new information to be brought out, how can you not be excited?''