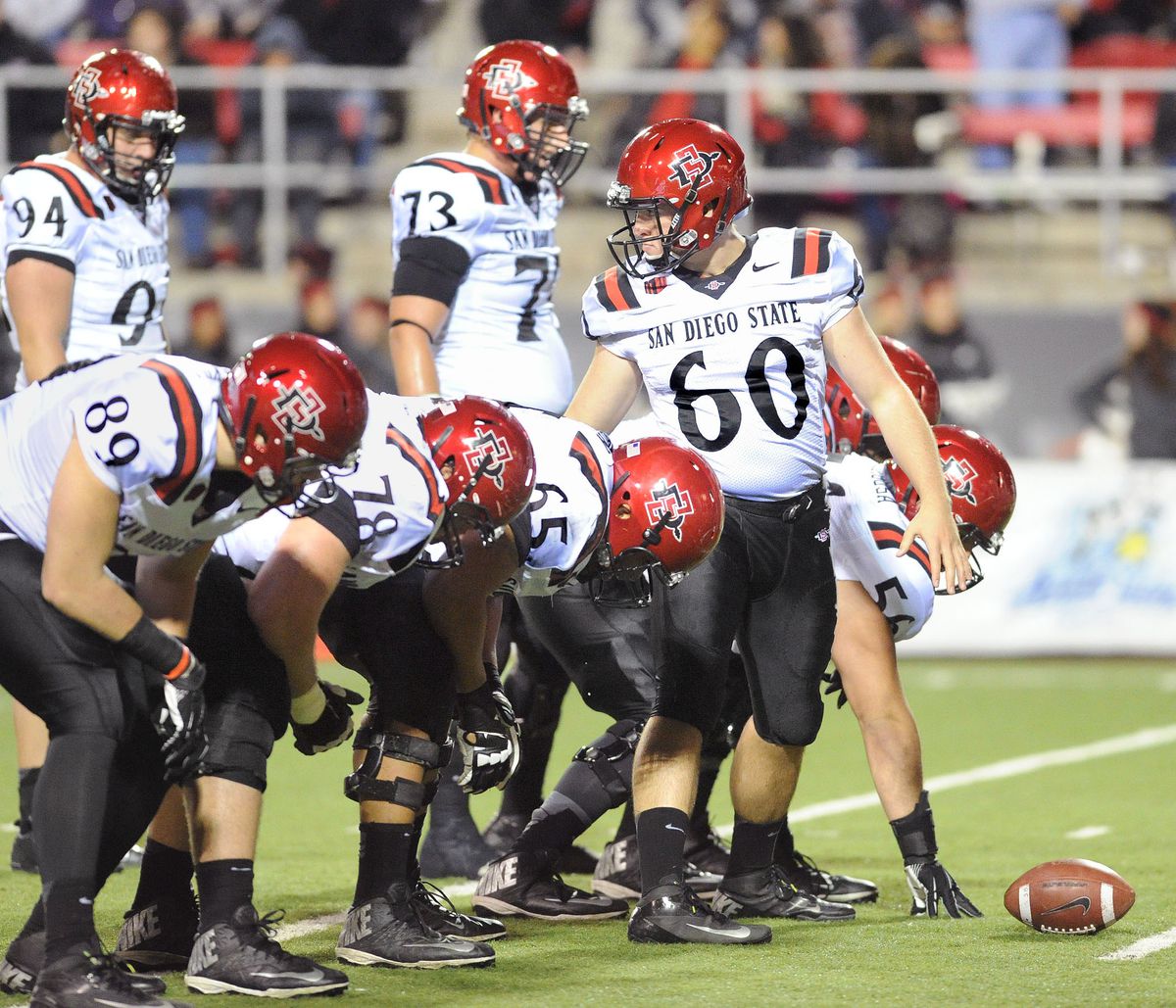 Jeff Overbaugh (60), a former Service Cougar who is now a senior at San Diego State, wants to become an NFL long snapper. His credentials — All-American as a long snapper and a perfect 510 for 510 on punts, point after attempts and field goals — indicate his aspirations are realistic.(Ernie Anderson / San Diego State University)

Jeff Overbaugh (60), a former Service Cougar who is now a senior at San Diego State, wants to become an NFL long snapper. His credentials — All-American as a long snapper and a perfect 510 for 510 on punts, point after attempts and field goals — indicate his aspirations are realistic.(Ernie Anderson / San Diego State University)

Anchorage's Jeff Overbaugh received the best Christmas present an aspiring NFL athlete could ask for: a contract with an NFL team.

When Minnesota Vikings long snapper Kevin McDermott dislocated his left shoulder in a Saturday game against Green Bay, Overbaugh received a call from the Vikings the next day, on Christmas Eve.

Overbaugh, a 6-foot-2, 236-pound graduate of Service High and San Diego State, flew to Minnesota on Christmas Day to try out with the team, was offered a contract on Tuesday and completed his first practice on Wednesday.

This weekend, Overbaugh is primed to play in his first NFL game — completing a long, circuitous journey since graduating from college in 2016. He's been on contract with four teams, played in one preseason game this seasson and participated in workouts with 10 NFL teams.

[A master of hiking the football, Anchorage's Overbaugh has NFL aspirations]

The Vikings picked Overbaugh as their long snapper over Justin Drescher, an NFL veteran who played for New Orleans from 2010-16 and for Arizona in eight games this season.

Provided things go as planned and he plays Sunday, Overbaugh will be the only Alaska player on an NFL team this season and the 11th in history.

"Really thankful for coach (Mike Zimmer) and (special teams) coach (Mike) Priefer for giving me this opportunity, and I'm trying to just do my best to help the team," Overbaugh said Wednesday. "Definitely an awesome experience to be able to sign here and … get my first NFL regular-season game under my belt."

Overbaugh has been on the cusp of making an NFL team multiple times, but this weekend's game against Chicago will be his first regular-season action since his college days.

He spent the 2016 offseason and preseason with the Los Angeles Rams only to be waived in the team's last round of preseason cuts. Overbaugh started the 2017 offseason with the Denver Broncos and finished it with the Chicago Bears, playing in one preseason game before he was waived.

Most of Overbaugh's time the last two seasons has been spent training and waiting for a break.

At Service High, Overbaugh played on the offensive and defensive lines and helped lead the Cougars to the 2008 and 2011 Alaska state championships.

With the Vikings, Overbaugh is part of a surprise Super Bowl contender. Minnesota is 12-3 and a lock to win the NFC North Division despite losing quarterback Sam Bradford and running back Dalvin Cook to injuries early in the season. According to vegasinsider.com, the Vikings' odds to win the Super Bowl are 5-1 — tied for second-best in the league with the Pittsburgh Steelers.

Overbaugh said he hasn't had discussions with the Vikings about a long-term place on the team.

McDermott, a five-year NFL veteran, said in a Sunday interview that he hopes to return to the team for the playoffs, but he's not sure about the timetable for his return. Most NFL teams have only one long snapper.

"Nothing has been discussed," Overbaugh said. "I'm just gonna do my best with the opportunity that I have."

Overbaugh said several family membes will be on hand to watch him play in Sunday's game against Chicago, including his parents, his brother, his girlfriend, an uncle and a cousin.

"I have pretty outstanding support from my family and my girlfriend's family to achieve this goal," Overbaugh said. "I'm blessed enough to be able to pursue this.

"Once it gets down to playing, it's time to go execute the scheme and execute my job for whatever unit is on the field at the time, and help the team win."

Alaskans in the NFL

If he plays for the Vikings on Sunday, Jeff Overbaugh would become the only Alaskan playing in the NFL this season and the 11th Alaskan ever to play in the league.

(This list includes only those players who have played in a regular-season or postseason game.)