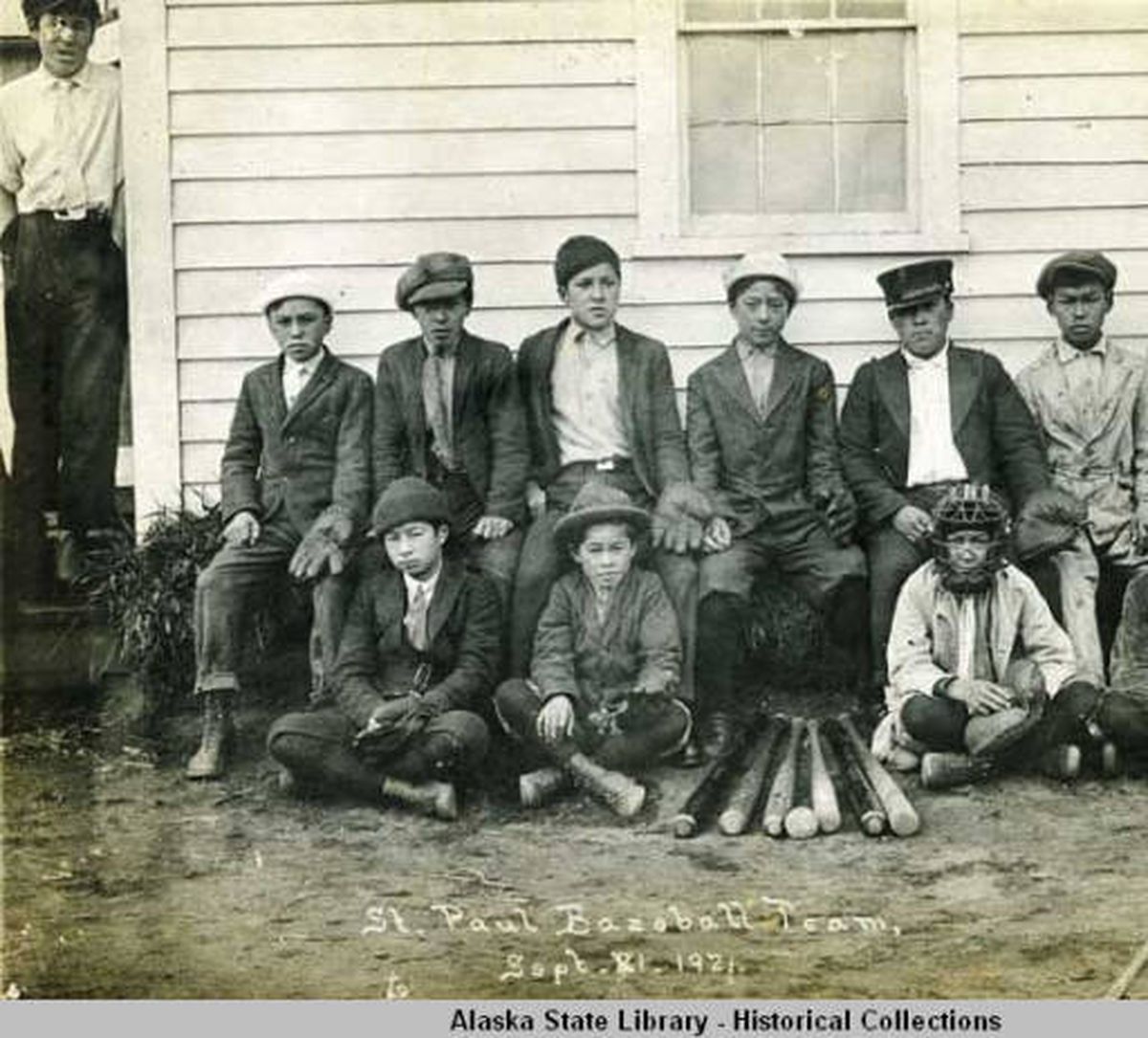 The day the U.S. Navy forced the evacuation of St. Paul Island in June 1942, a baseball game was being played on the little speck of land in the Bering Sea.

Players and spectators learned they had to go home, pack one suitcase and board a ship that would carry them from the Pribilof Islands to Southeast Alaska, where they would be interned. The evacuation, they were told, was necessary to protect them from the Japanese during World War II.

Less known is the extent of baseball's history on St. Paul, although that is changing.

About a year ago, two members of the St. Paul Island tribal government were working long days writing an education grant. One of them, Dylan Conduzzi, took a break and went online to read about baseball. One Google search led to another until he discovered a site listing the first baseball teams in each of the 50 states.

The listing for Alaska stunned him: "Knock down and Skin em Club of St. Paul Island."

"Did you ever hear of this?" Conduzzi asked other members of the tribal government.

Conduzzi's research led him to baseball historian Bruce Allardice of South Holland, Illinois, who provided a verified account of the team's existence 150 years ago.

Various other sources, including Major League Baseball's Memory Lab, confirmed that the team was formed in July 1868 – the year after the United States purchased Alaska from Russia.

Allardice sent Conduzzi a copy of a Jan. 9, 1869, article from the Columbia Register of New Haven, Connecticut, that is likely the first written account about the "Knock Down and Skin 'Em" club.

"With the advent of the star spangled banner among the denizens of Alaska, the poor fellows have discovered that one of the penalties of annexation is an infliction of "the national game" of baseball," the story said. "… (the) Knock Down and Skin 'Em club was organized by missionaries from New London. The names of the club will be found of interest to those anxious to become acquainted with the proper names of our new fellow citizens.

"… The club challenges the whole United States to meet them at St. Paul's Island."

According to the article, players came from St. Paul Island, Kodiak (spelled Kodiac by the newspaper), Hawaii and Connecticut.

The team's captain was Daniel Webster, a longtime foreman agent in the fur seal  industry in the Pribilof Islands.

The umpire, Jeremiah Potts, was an ensign in the Navy traveling the Pacific Coast on the USS Suwanee, according to Allardice. The Suwanee sank later that year, but Potts survived, and Allardice believes he shared the story of the Knock Down and Skin 'Em team when he returned to Connecticut.

Among those sharing Conduzzi's surprise over the revelation of St. Paul's role in baseball history was 29-year-old John Wayne Melovidov, who was born on St. Paul Island and works for the tribal government.

"St. Paul has a long, documented history with the government being there so long, so it's not every day we come across this kind of exciting history," Melovidov said. "That personally blew me away."

Melovidov figures the team used bats made from driftwood, because there are no trees on St. Paul Island, now home to about 500 people, most of them Aleut.

The rest of the equipment may have come from employees of fur companies, missionaries or U.S. government surveyors.

Though nothing yet has provided an explanation for the team's nickname, Melovidov said it's an obvious, and literal, reference to the island's seal harvesting industry.

"It's seal hunting, absolutely," he said. "You're knocking 'em down, and then you're skinning them."

In the months since the tribal government learned about the team, a website has been created and the team's name has been trademarked.

"Knock Down and Skin 'Em" T-shirts were given away at last week's softball game that is played annually on the anniversary of the June 14 evacuation. The hope is to sell T-shirts to help finance a new baseball field.

A new field would replace the current field that sits in the middle of the town, right next to the main road. It consists of dirt and rocks, with no grass and no bleachers. The No. 1 desire, Conduzzi said, is to build a field with grass.

Melovidov, who thinks the Knock Down and Skin 'Em team played on the same spot, grew up playing softball on the field.

"We learned to hold our hand in front of our face with our mitt down to the ground in case a rock comes up," he said.

No one knows how long the Knock Down and Skin 'Em team lasted, but even when it disappeared, baseball didn't vanish from the island. One old photo, circa 1919, shows members of a Japanese fleet, wearing baseball uniforms.

These days, softball games are a big deal on the Fourth of July and on June 14, the date of the evacuation. People watch from trucks parked around the field, "and anytime anyone hits a home run, they honk their horns," Melovidov said.

Though softball has replaced hardball on the island, "we hope to reintroduce baseball to the kids, and try to form a Little League," Conduzzi said.

Who they would play is a head-scratcher, he admitted – St. Paul Island, which in recent decades has become a bucket-list destination for birders, is one of the most remote spots in Alaska.

Mostly, Conduzzi said, the hope is to provide St. Paul residents – and all of Alaska — with a sense of pride about the past.

"We have a rich and storied history that isn't always honored the way it should be," he said.

For St. Paul Island, much of that history is one of things being taken away – from the management of its seal industry, which the U.S. government controlled from 1867 to 1983, to the forced evacuation in 1942.

"Everyone we tell this story to is enthusiastic and surprised," he said. "They have that wow moment."

The story is a delightful addition to a complex history. Conduzzi said tribal president Amos Philemonoff summed it up best: "A lot of times our history is sad and depressing. This is something that's uplifting and positive."

A religious and patriotic ceremony commemorates the Fourth of July in 1938 in St. Paul. (Photo credit: National Marine Fisheries Service)