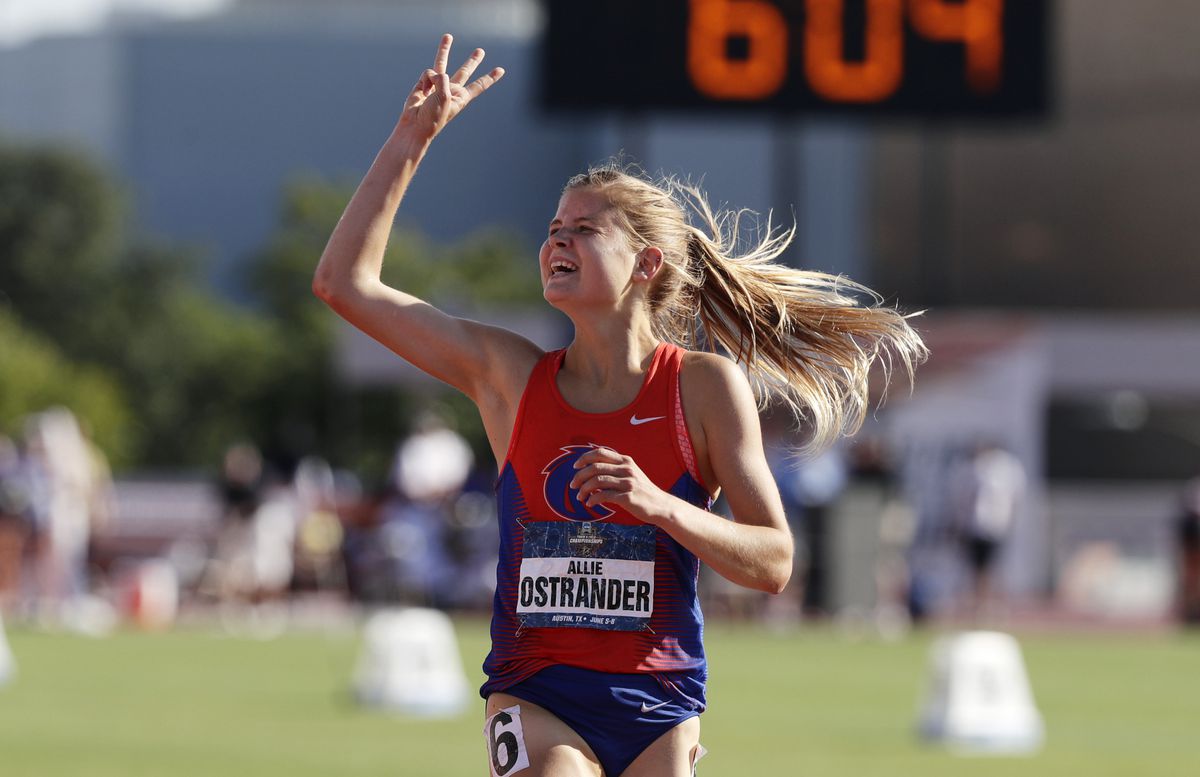 Suffocating heat couldn’t keep Alaska’s Allie Ostrander out of the record book Saturday at the NCAA Division I track and field championships in Austin, Texas.

The Kenai Central graduate made NCAA history in brutal conditions — 98-degree heat, with a thermometer reading of 115 degrees on the track — by becoming the first woman to win three straight titles in the 3,000-meter steeplechase.

“I feel so hot right now, and not in the attractive way,” Ostrander told ESPN2 after the race. “I feel like I’m really low on the scale in that department.”

A redshirt junior at Boise State, Ostrander pulled away from the field with less than three laps remaining in the 7.5-lap race at Mike A. Myers Stadium at the University of Texas. She was in complete command after that, breaking the stadium record she set during Thursday’s semifinals and establishing a new personal-best.

The only Alaskan to win more Division I track titles than Ostrander is Anchorage’s Jordan Clarke, who captured four straight shot put titles for Arizona State from 2011-13.

Ostrander is undefeated in the steeplechase, an event she picked up as a redshirt freshman at Boise State. When she won her first championship in 2017, it was just the fourth time she had run the event that requires runners to clear hurdles and splash through water hazards.

She told ESPN2 that Saturday’s victory was meaningful because no one has ever three-peated in the event since the women’s steeplechase became part of the NCAA championships in 2001.

“I feel like a lot of the stuff I do in the NCAA has been done, and I’m just replicating that,” she said. “This one is all mine.”

Ostrander’s quest for a third-straight All-America double in the steeplechase and 5,000 meters was foiled, likely by the heat. After her steeplechase victory, Ostrander had less than 90 minutes before the 5,000 meters, where a top-eight finish would have earned her All-America recognition for the third straight year. She finished 16th, well behind the lead pack, in 16:28.9. Colorado’s Dani Jones won in 15:50.65.

Three years ago, Ostrander was the first woman to attempt the steeplechase and the 5,000 on the same day at the national championships. She placed fourth as a freshman and eighth as a sophomore.

This year, she was one of five steeplechasers to attempt the double. Hannah Steelman of Wofford College was the only one to claim All-America honors in both races — she was third in the steeplechase and eighth in the 5,000.

"I feel so hot right now, and not in the attractive way, I feel like I'm really low on the scale in that department."@allie_ostrander wins her third NCAA steeplechase title in 9:37.73. The heat hasn't taken a toll on her humor. pic.twitter.com/D7MqgPh8iU