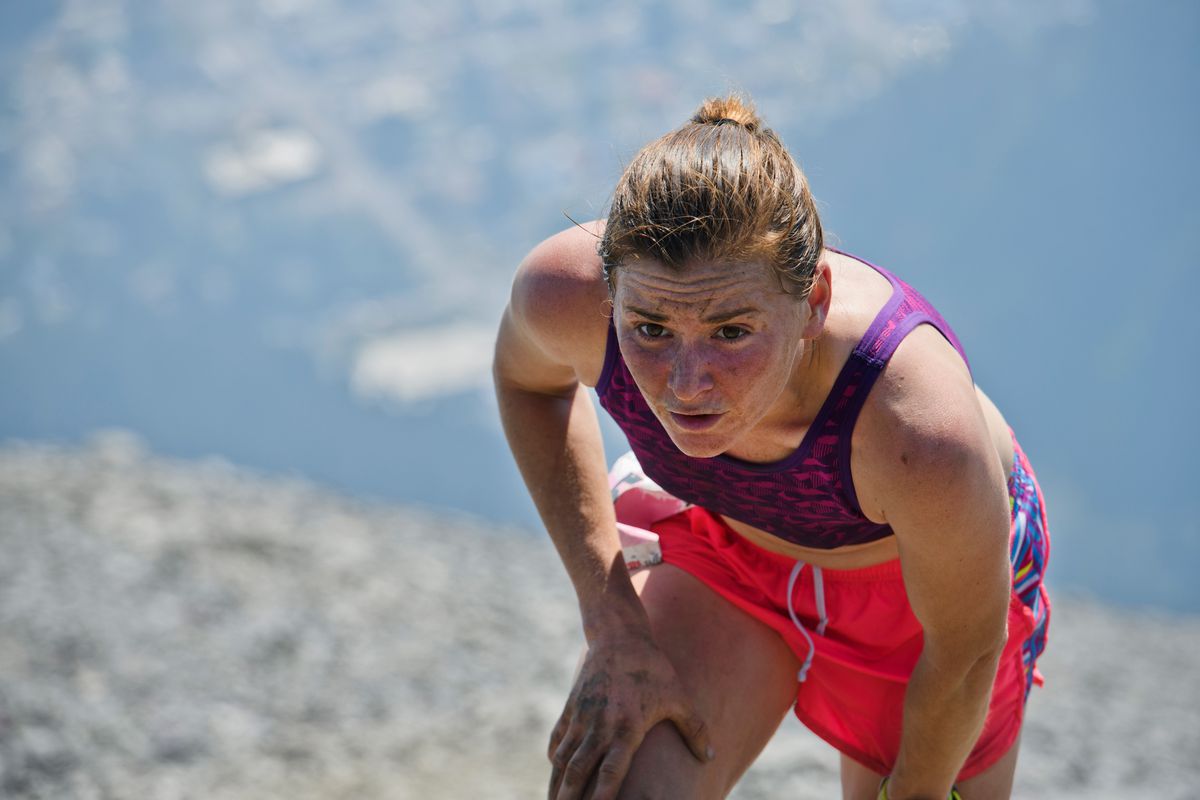 Hannah Lafleur, of Seward, reaches the top of the Mount Marathon course on July 4, 2019, in Seward. (Marc Lester / ADN)

Hannah Lafleur, of Seward, reaches the top of the Mount Marathon course on July 4, 2019, in Seward. (Marc Lester / ADN)

SEWARD — Hannah Lafleur’s first impression of Seward, formed 10 years ago when she spent the summer here, wasn’t the best: “Man, this place is rainy and cold.”

On Thursday, her adopted hometown gave her a warm, exuberant welcome as she crossed the finish line as the Mount Marathon women’s champion, who passed two-time champion Christy Marvin on the harrowing descent of the 3,022-foot mountain.

Lafleur, a New Hampshire woman who moved to Seward full time in 2016 and works for a kayak adventure company, finished the race in 53 minutes, 24 seconds.

Marvin, racing for the first time on a surgically repaired knee, was second in 53:54. Third place went to Julianne Dickerson of Anchorage in 54:03.

Several of the top finishers said they weren’t badly impacted by smoke from a wildfire on the other side of the Kenai Peninsula.

But they were hot. Downtown temperatures were in the mid-60s but it was much hotter on the mountain, especially in the trees.

“I want to say a million times, thanks to the volunteers that gave me ice," Lafleur said. “I was putting it on my head and shoving it down my sports bra.”

Lafleur, 30, was the third woman to reach the top of Mount Marathon. Marvin got there first in 40 minutes, followed closely by Dickerson.

While Lafleur is a relative newcomer to Seward, three Seward-grown runners joined her in the top six: Allison Barnwell placed fourth (57:26), Denali Foldager-Strabel was fifth (59:06) and Aubrey Smith was sixth (59:54).

No other runners broke the one-hour mark, but seventh-place Ruby Lindquist of Moose Pass (1:00:20) gave Seward another runner from the area to cheer.

Missing from the field were Jessica Yeaton, the defending champion, and Rosie Frankowski, who was the first runner to the top last year en route to seventh place. Yeaton has been nursing an injury, and both women are among Alaska’s elite cross-country skiers who were worried about racing because of the air quality. Their focus is on skiing, not mountain running.

Lafleur said she was bummed by their absences but understood their reasons.

Lafleur finished second in two previous races this season, the Crazy Lazy and Bird Ridge. She’s not sure when she will race again, because her feet were throbbing with pain after the race after the pounding they took on dry, dusty scree during her descent.

On the way up the mountain, Marvin made powerful strides, sometimes breaking into a jog to keep Dickerson at bay. At one point as they neared the top, they were so close they were nearly touching, but Marvin’s bursts of power gave her a 16-second edge over Dickerson at the turnaround point.

Lafleur trailed the leaders by about a minute at the top.

“I thought, well, third (place) will be cool,” she said. “I guess the downhill favored me.”

Lafleur was 69 seconds behind Marvin at the top but made her descent in a little more than 12 minutes. Marvin, the winner in 2016 and 2013 and third last year, came down in a little less than 14 minutes.

Lafleur said she caught Dickerson on the scree before the halfway point and caught Marvin near the creek in the gut, closer to the bottom of the mountain.

After that she willed herself to keep the lead.

“Move your feet faster,” she said she told herself. “No brakes.”

It was Lafleur’s fastest finish in three Mount Marathons; her previous best was 54:02 last year when she finished fifth.

It was the slowest time in seven races for Marvin, whose PR is 51:02 in 2016. Marvin said she went head-over-heels twice in the gut; after her second somersault, she landed on her knees and needed a couple of minutes to regain her normal stride.

Marvin, a 38-year-old Palmer woman, was racing for the first time since having knee surgery last winter to repair a torn meniscus. Her recovery has gone well, she said, and she was eager to test herself at Mount Marathon.

Then she got news that made her even more determined to race. Vyrl Bowen, an 11-year-old Palmer boy on a youth track team that Marvin coaches, found out Thursday morning that he has brain cancer.

Marvin was still catching her breath as she spoke about him in the finish chute.

“I want to tell you this first in case I pass out,” Marvin said. She was dedicating her race to Bowen, she said, and by battling through her injury she hoped to inspire the little boy “to fight to the finish.”

“It doesn’t matter if you win, lose or draw, because the only way you fail is if you don’t try,” she said.