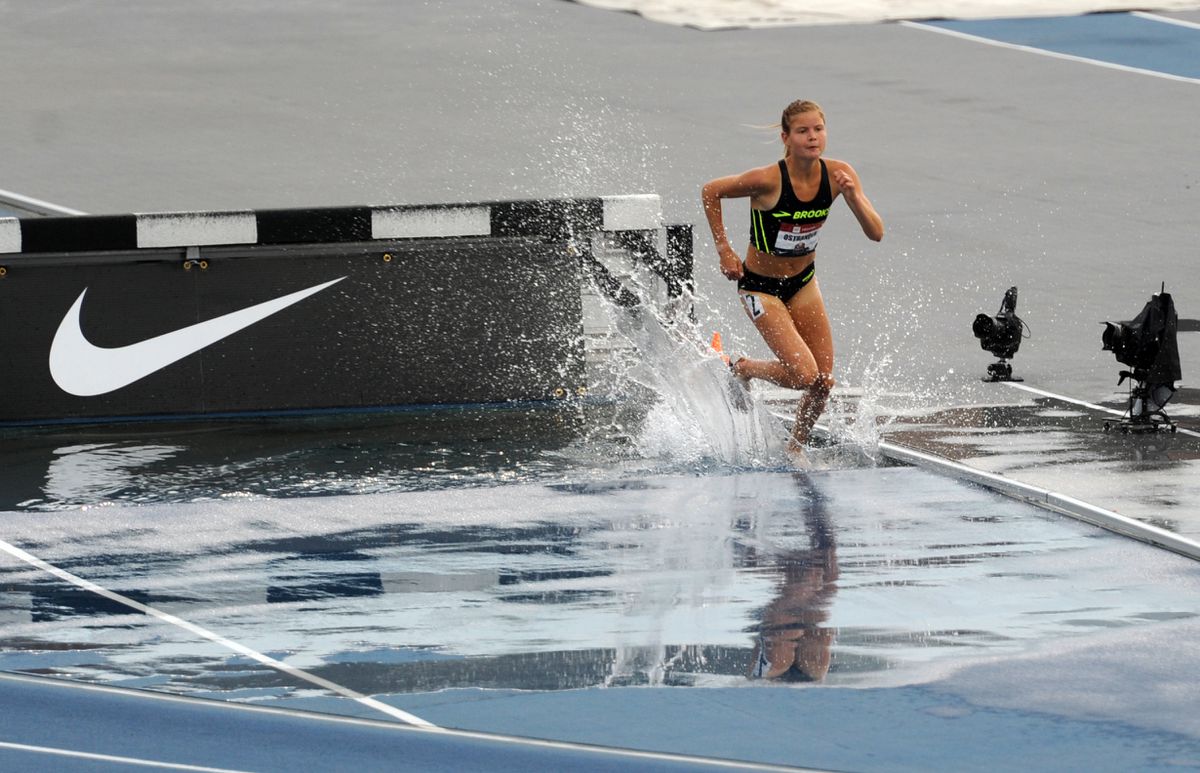 Allie Ostrander will compete in the steeplechase at the World Championships later this month but on Sunday she's running the 5th Avenue Mile in New York City. (Photo by Erik Hill)

Allie Ostrander will compete in the steeplechase at the World Championships later this month but on Sunday she's running the 5th Avenue Mile in New York City. (Photo by Erik Hill)

On Sunday, Alaska’s Allie Ostrander will race 20 blocks in midtown Manhattan with 22 other women, all but one of whom is faster than her.

This is why she turned pro.

Ostrander, who gave up her final year of college eligibility at Boise State to turn pro after winning her third straight NCAA steeplechase title in June, will race in the women’s professional heat at the New Balance 5th Avenue Mile. NBC’s live coverage of the men’s and women’s pro heats begins at 8:30 a.m. ADT.

Ostrander, 22, enters the race with a personal-best mile track time of 4 minutes, 35.79 seconds, registered earlier this year at an indoor meet at the University of Washington.

Only one other runner in the field of 23 has a slower PR. Eight have broken the 4:30 mark, including eight-time Fifth Avenue Mile champion Jenny Simpson, the bronze medalist in the 1,500 meters at the 2016 Summer Olympics. Simpson’s best time on the track is 4:17.30, and she’s gone even faster on the road — she owns the 5th Avenue Mile course record of 4:16.6.

Ostrander isn’t daunted by the competition. She’s driven by it.

“It’s a really competitive field, and I have one of the slower PRs in the race. That’s always an exciting opportunity,” Ostrander said in a recent interview.

“It’s always fun to be in a race with people that will really challenge me. I think that was part of the reason I chose to go pro — I love having those opportunities to really push myself and be pushed by other people.”

More often than not, the Kenai Central graduate makes the most of those opportunities. At the Prefontaine Classic earlier this summer, Ostrander faced a strong 3,000-meter steeplechase field that included the world record holder and the reigning world champion, and she responded by slicing more than six seconds off her previous best time.

Ostrander signed a pro contract with Brooks Running shortly after that race, and a month later qualified for the World Championships with a fourth-place finish in the steeplechase at the U.S. national championships.

Though the Brooks team is located in Seattle, Ostrander is still in Boise, with plans to move to Seattle after this month’s World Championships.

“I’m pretty much training on my own since I haven’t moved,” she said. Training plans are texted to her by Brooks coach Danny Mackey, she said.

Although the steeplechase has been her meal ticket lately, Ostrander said she doesn’t think she will specialize in the event as a pro. She possesses versatility that makes her a threat in every distance from 1,500 meters to 10,000 meters

“It’s just going to be an on-going evaluation trying to decide which event I’ll have the best chance to have a shot at the Olympics,” she said.

The next Olympics are in Toyko next summer beginning on July 24. The Olympic Trials are the month before in Eugene, Oregon.

At the 2016 Olympic trials, a teen-aged Ostrander placed eighth in a field of 16 in the women’s 5,000. It was an impressive showing considering she was 19 and fresh off her freshman year at Boise State running against a field of professionals with an average age of 26. Plus she was running on five weeks of training after missing two months with an injury.

Ostrander will be more seasoned at the next trials, but right now she doesn’t consider herself a top contender for making the U.S. team.

“It’s definitely a tall order, but not completely out of the question,” she said. “Anything can happen in a year — you can see huge growth in an athlete, or the field could change due to injuries or whatever. It’s hard to say exactly what my chances are, but at the moment I’m looking in from the outside.”

The Olympic Trials will keep Ostrander out of next year’s Mount Marathon, the race that made her a running star in Alaska, if not the rest of the world. She won the junior girls race six straight times, beating all of the boys in her final year as a junior, and in her two times on the mountain in the senior division she has posted the second- and third-fastest women’s times in race history.

“It’s an off-year for track — no Olympics or World Championships that year. So it would be a good year for me,” she said.