After the 1931 race, Seward’s Mount Marathon took a 7-year break for unknown reasons 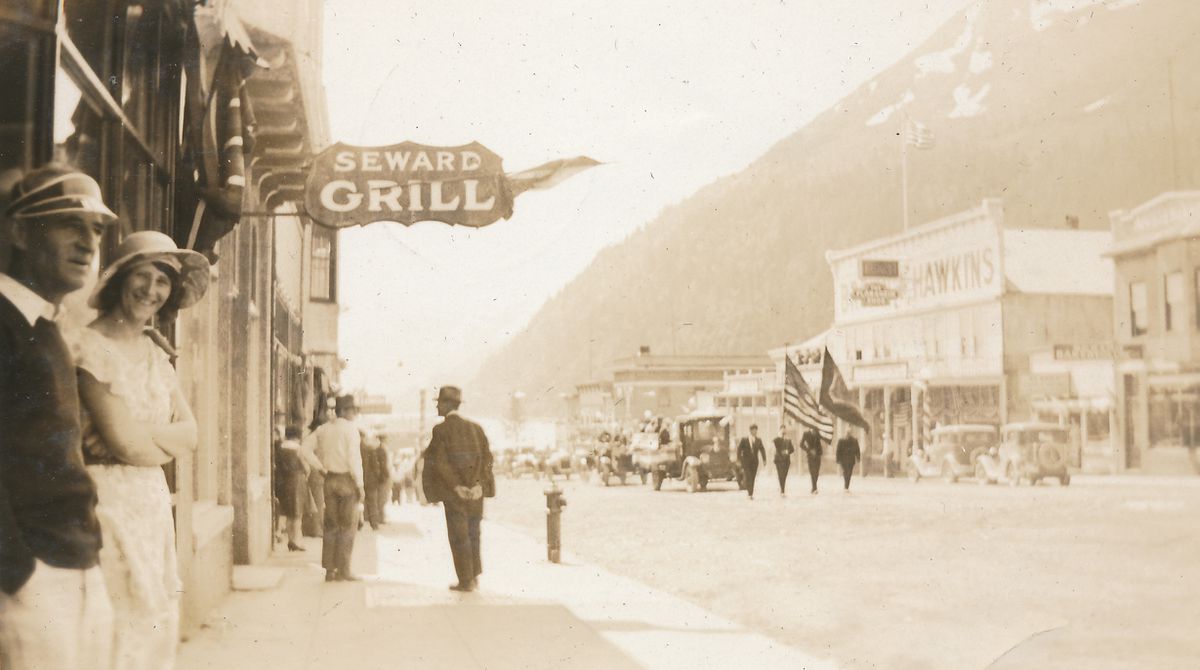 One of Alaska’s biggest sporting events, Mount Marathon won’t happen this year because of the COVID-19 pandemic. First held in 1915, the famous Seward race has been canceled on 13 previous occasions, most recently in 1942 because of World War II. This is the second part of a story that looks at the 1931 race, the last before a seven-year gap between races from 1932-38. Part one was published Tuesday.

A few days before the 1931 Mount Marathon Race, people in Seward watched a bear on the mountain’s slopes and wondered if it was practicing for the contest.

“He moved up and down the mountainside,” the Seward Gateway newspaper observed, “with great rapidity and probably wore out a pair of pants.”

[Related: Before taking an unexpected break 90 years ago, Mount Marathon was a showcase for Native teens]

Everyone’s eyes were on the race — or so it seemed. Beneath the surface, there may have been stirrings, thoughts that putting on the Mount Marathon Race wasn’t worth the effort anymore.

While the town prepared for the big two-day celebration, a Seward Gateway editorial challenged the town’s commitment to race and suggested that the business community didn’t place enough value on the race’s benefit to Seward.

“This classic is something no other town in the Territory could possible duplicate because of the natural conditions available here. Seward has the mountain and the race can be viewed with ease from Seward’s streets; from start to finish. … Make it one of the feature athletic events in Alaska!”

But for the next seven years, there would be no Mount Marathon Race. Perhaps it was the worsening Depression. But there may have been other reasons.

With several ships in port and alcohol readily available, the 1931 celebration had its problems. Some events got out of hand. On July 6 the Seward Gateway ran an editorial titled “A Disgraceful Affair,” and people complained that the Friday night Jitney Dance was “one of the most disgraceful public affairs every to have been witnessed in the city. The conduct, especially outside the hall, by alleged drunks, was nauseating; obscene language seemed to be the order of the evening together with fights.”

They suggested more “rigid surveillance,” which must have happened during the Saturday night dance. “Never was a more enjoyable and orderly public dance presented,” the newspaper bragged, “and the result was a huge throng of people waxed merry until 3 o’clock in the morning.”

Maybe the same people who organized the race year after year were getting burned out — a situation common in small towns. During the 1930s when the race wasn’t held, Anchorage encouraged Seward and Seward encouraged Anchorage to attend the other’s Fourth of July celebrations.

Maybe it was the bad luck associated with the 1935 death of Ephraim Kalmakoff, the teenager from the Jesse Lee Home who won the race three years in a row and set a speed record that stood for nearly 30 years. Kalmakoff developed tuberculosis in the early 1930s, and at the time some attributed his illness to his excessive training for the Mount Marathon Race.

Or perhaps, embedded within all these reasons for the contest’s elimination, there was some resentment that the Mount Marathon Race had turned into a showcase for the boys of the Jesse Lee Home, a residence for Alaska Native children who were either orphaned or in need of care.

Said Frances B. Currier, a former superintendent of the home, in the Sept. 1966 Alaska Sportsman magazine: “Maybe the older and less conditioned runners were waiting for (the race to fall on) another Sunday which might keep” the Jesse Lee boys home — as had happened in 1927, when Kalmakoff, a strict Methodist, chose not to run on the Sabbath.

With boys from the home dominating, the race seemed to get less notice in the Seward Gateway. In 1929 the newspaper gave race results a four-inch write-up on page six. The next year results were listed as “kids races,” with winning times given in round figures only.

Ironically, with the Mount Marathon Race’s revival in 1939, five of the six entrants were Jesse Lee Home runners and one of them, Johnny Hughes, took first place while other boys from the home finished second and fourth. Hughes won again in 1940 and was second in 1941 to classmate Oscar Wilson. There was no race in 1942, but in 1944, Ephraim Kalmakoff’s brother, Inekente Kalmakoff, a 25-year-old private in the Army Transport Service, won the race.

That was the eighth and final win for the Jesse Lee Home boys, although the home’s tradition continued indirectly beginning in 1946 with the first of nine victories by Seward runner Ralph Hatch. Hatch’s parents had been raised in the Jesse Lee Home in Unalaska and later worked at the home in Seward. Hatch was born in Unalaska in 1925 and came to Seward when the home moved there.

As reported by the Seward Gateway, the 1931 race “began with the starter’s gun at 4:12 p.m. Friday and the sidewalks of Seward were lined with throngs, many of whom broke out binoculars; but these were not necessary as the visibility was perfect as was also the weather.”

“Kanyak especially finished in good shape,” the Seward Gateway reported, “and seemingly could have run for another hour. The other two youths were not so fresh at the finish but neither did they appear all in.”

It was a rollicking Fourth of July celebration, but seven years would pass before the next Mount Marathon Race. And for the record — on the baseball field, the Moose Pass Terriers beat both the Seward Giants and the crew of the U.S.S. Discoverer and were declared the champions of Southwestern Alaska.

Doug Capra lives in Seward with his wife, Cindy. He’s the author of The Spaces Between: Stories from the Kenai Mountains to the Kenai Fjords. This story is a revision of one that ran in the July 1, 2015 issue of the Seward Journal. Capra used many sources to compile this story, but he wants to especially thank Jacquelin Pels whose second volume of the history of the Jesse Lee Home was most helpful.

Seward Library-Museum Archives; Seward Gateway archives, Jacqueline B. Pels history of the Jesse Lee Home, “Family After All: Alaska Jesse Lee Home (Seward, 1925-1965);” Sept. 199 Alaska Sportsman “all you have to do is run up that mountain,” by Frances B. Currier; 1952 Seward Seaport Record article by Justin Jay Stauter; and the author’s personal files and research.

Doug Capra is a freelance writer from Seward.