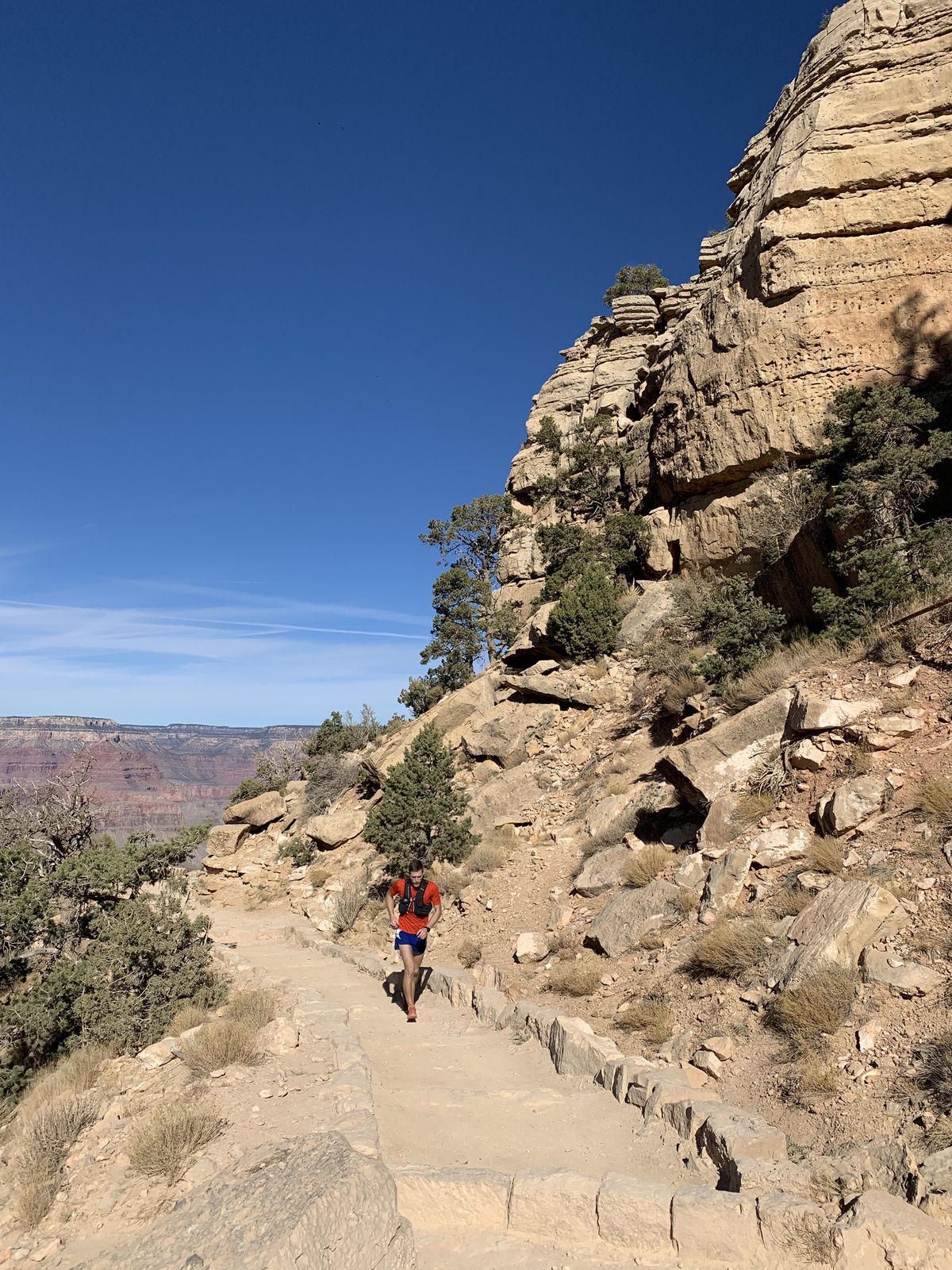 Lars Arneson will remember the summer of COVID-19 as a time of terrific training but no racing, which is why when winter came to Alaska, Arneson headed to Arizona in search of warmer weather and a challenge that would tell him if he’s as fit and fast as he feels.

Arneson, a 30-year-old trail runner from Anchorage, on Friday made a double-crossing of the Grand Canyon in less than seven hours to set a speed record on the 40-mile Rim to Rim to Rim route.

Arneson recorded the fastest-known-time (FKT) for an unsupported run on the route, considered a classic among elite trail runners. His time of 6 hours, 38 minutes, 42 seconds carved 15 minutes off the 2011 record of 6:53:38.

“I’m hobbling pretty well today,” he said Saturday. “I’m pretty sure I’m going to lose both of my big toenails. My calves are quite painful and I have a few blisters on my right foot.”

Not a bad injury report, considering.

For many, a single crossing of the Grand Canyon — known as the Rim to Rim — is a bucket-list endeavor. Going from the south rim to north rim, the 20-mile route includes a 5,000-foot descent into the canyon, 7 miles across the canyon floor and a 6,000-foot climb up the other side of the canyon.

Ultrarunners take it to extremes by making it a round trip, known as the Rim to Rim to Rim. Arneson said his GPS showed he traveled 40.5 miles and climbed (and descended) 11,000 feet.

In a single morning he experienced a temperature range not unlike the difference between Alaska and Arizona this time of year — 37 degrees and dark when he started at 5:05 a.m., and hot and sunny as noon approached while he climbed back to the spot where his day began.

No moose to worry about, but Arneson had to pass a train of mules while making his final climb out of the canyon. (”You smell them before you see them,” he said.)

The biggest threat was thirst. Things were going well, Arneson said, until he ran out of water with 2 miles to go.

“I started cramping for the first time,” he said. “My calves would cramp if I tried to make too big a step or step too high — the trail is tiered there, so there’s steps. My hip flexors would go at the same time, so I adapted a shuffle where I was swinging my hips to keep leg moving ahead.

“I’ve never cramped up before in a race in my life.”

In the summer of 2019 he won the Alaska Mountain Runners Grand Prix men’s title and established a new record in the 12-Peak Challenge, which entails climbing the 12 peaks higher than 5,000 feet in the front range of the Chugach Mountains.

Then came the summer of COVID-19 and the cancellation of nearly every race.

When Arneson and fellow ultrarunner Chad Trammell of Anchorage decided to seek a heat in Arizona, Arneson started looking at various lists of FKTs and decided to make a run at the Rim to Rim to Rim record.

“I had a really big summer of training and no races, and I felt like this was a good opportunity to see how I stack up with some of the best runners in the country and give myself an opportunity to put those months of training to use,” he said.

In recent weeks, his training turned a bit unorthodox — nightly trips to places like Potters Marsh and Rabbit Slough for two hours of skating on Nordic skates. Not long before he left, he ran a 1-mile time trial at The Dome in a personal-best time of 4:27 — 14 seconds better than his previous best.

“That helped me build enough confidence to try it,” he said.

Arneson’s run began at the South Kaibab trailhead on the canyon’s south rim, an elevation of about 7,200 feet. It’s a steep 5,000-foot drop to the canyon floor and the Colorado River, a stretch of about 7 miles that Arneson said he covered in 46 minutes.

The next 7 miles go across the canyon floor, and then comes the climb to the north rim of the canyon, another 7 miles with about 6,000 feet of elevation. Arneson reached the North Kaibab trailhead in a little more than three hours, which put him on pace for the record.

The sun didn’t rise until Arneson was about two hours into his run, and even then he was in shade most of the time he was on the canyon’s floor and north wall. But as he climbed up the south wall of the canyon, the FKT within his reach, he also climbed into sunlight.

“That’s when it started getting hot and I was in direct sun for the first time. And there are no more water sources between there and the top.”

There are water spigots on the canyon floor, and while crossing it for the second time Arneson filled his two half-liter flasks twice. But the climb back to the south rim came during the hottest, sunniest part of his run, and he ran out of water with 2 miles left.

“I was just trying to make it in without having to stop and sit by the side of the trail,” he said.

When he finished, Arneson accepted a Pepsi from Anchorage runner Anna Dalton. Until that moment, he could not have accepted a Pepsi or anything else without jeopardizing his record-pursuit. He was chasing the FKT for an unsupported run, which prohibits accepting any kind of aid or assistance.

After drinking the Pepsi, Arneson found a spot in the shade and laid down for 45 minutes. Within 24 hours, he was headed back to Anchorage.

“I’m excited to get back and start skiing,” he said.