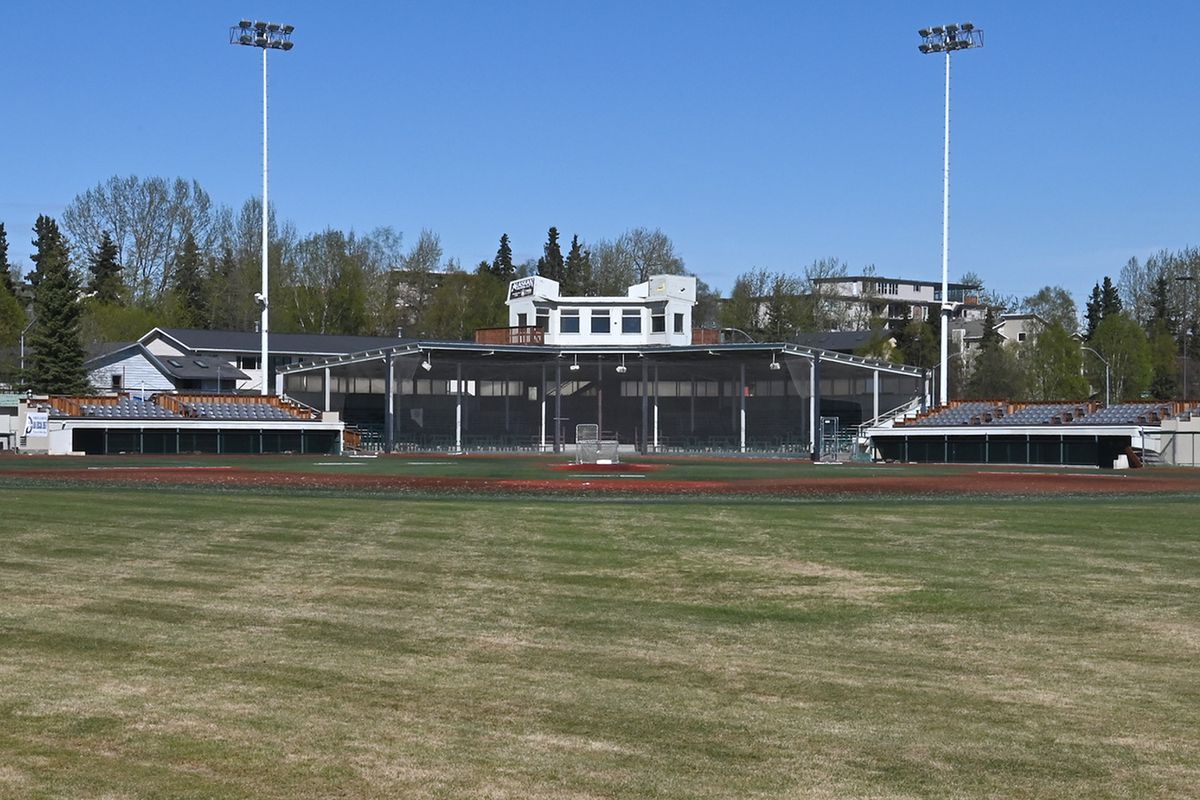 Mulcahy Stadium will not be home to any Alaska Baseball League games this summer. (Bill Roth / ADN)

Mulcahy Stadium will not be home to any Alaska Baseball League games this summer. (Bill Roth / ADN)

The Alaska Baseball League canceled the 2020 season on Friday, but two of the league’s five teams hope to play anyway.

During a Friday morning teleconference, the league’s general managers canceled the season because of the COVID-19 pandemic and various restrictions in place because of it.

“We would play each other on weekends, and play intrasquad games the rest of the week,” he said. “We’re hoping we can pull this off. It’s not a sure thing by no means.”

Since 1974, the ABL has brought college players north for a two-month season that routinely features players who go on to Major League Baseball. Among them: New York Yankees slugger Aaron Judge, who played for the Pilots, and St. Louis Cardinals first baseman Paul Goldschmidt, who played for the Anchorage Bucs.

The ABL has two teams in Anchorage, one in Chugiak, one in Palmer and one in Kenai; a sixth Alaska team, the Fairbanks Goldpanners, operates independently.

The Goldpanners and Kenai Peninsula Oilers canceled their seasons several weeks ago, but the other teams held out hope until Friday that an abbreviated season might happen.

Christopher said those hopes ended early in Friday’s conference call when Chugiak Chinooks general manager Chris Beck said his team couldn’t play. The Chinooks are one of three summer-league teams sponsored by Ohio-based Athletes in Action, and Christopher said the organization decided not to field teams this summer because of the pandemic.

“I was 75% sure we were going to play as a league, but when Chris said the Chinooks aren’t going to play, it took the wind out of my sails,” Christopher said.

The Bucs won’t play either. General manager Shawn Maltby said there was too much uncertainty about access to Mulcahy Stadium in Anchorage and too much financial risk given the reduced number of home games in a shorter season. Fewer games means fewer opportunities to sell tickets and concessions, which help pay the bills.

The prospect of quarantining players for 14 days — one of the state’s health mandates for people coming to Alaska — was another factor, Maltby said.

“Huge," he said. “We’d have to bring them in two weeks early. The next proposal is supposed to be a seven-day quarantine followed by a test, and when you have those types of restrictions it’s difficult.”

ABL players typically live with families that volunteer to be summer hosts. Christopher said he’s got 32 college players, plus four local players, on his roster. He said he will ask each of them to get tested for the coronavirus five days before they fly to Alaska, and will have them re-tested at the airport when they arrive in Alaska.

“We’re taking a chance, but if you look at the metrics in the Valley, we’ve had one case in 30 days," CHristopher said. “They’ll be at the gym, their host families or the ballpark. They won’t be running around.”

Christopher said the plan for a Miners and Pilots mini-season depends in part on the availability of Mulcahy Stadium, where the Pilots and Anchorage Bucs play their home games. Mulcahy and other Anchorage sports facilities have been closed because of the pandemic, but will reopen next week as Anchorage enters phase 3 of its planned reopening, Anchorage Mayor Ethan Berkowitz said in a Friday afternoon briefing.

That will allow things like baseball games to happen, said Chris Schutte, the director of Anchorage Economic and Community Development. Permit applications for Mulcahy Stadium should able to be processed next week, he said.

The Goldpanners pioneered the idea of baseball in Alaska with college players, forming in 1960 as a barnstorming team. The Glacier Pilots came along in 1969, and in 1974 the Oilers fielded their first team and the ABL was created.

Though this will be the first season with no league in place, every team in the league has sat out at least one season over the years for various reasons, usually financial.

“We’re not going anywhere,” Maltby said. “We’ll be back.”