A beginner’s guide to your March Madness bracket pool 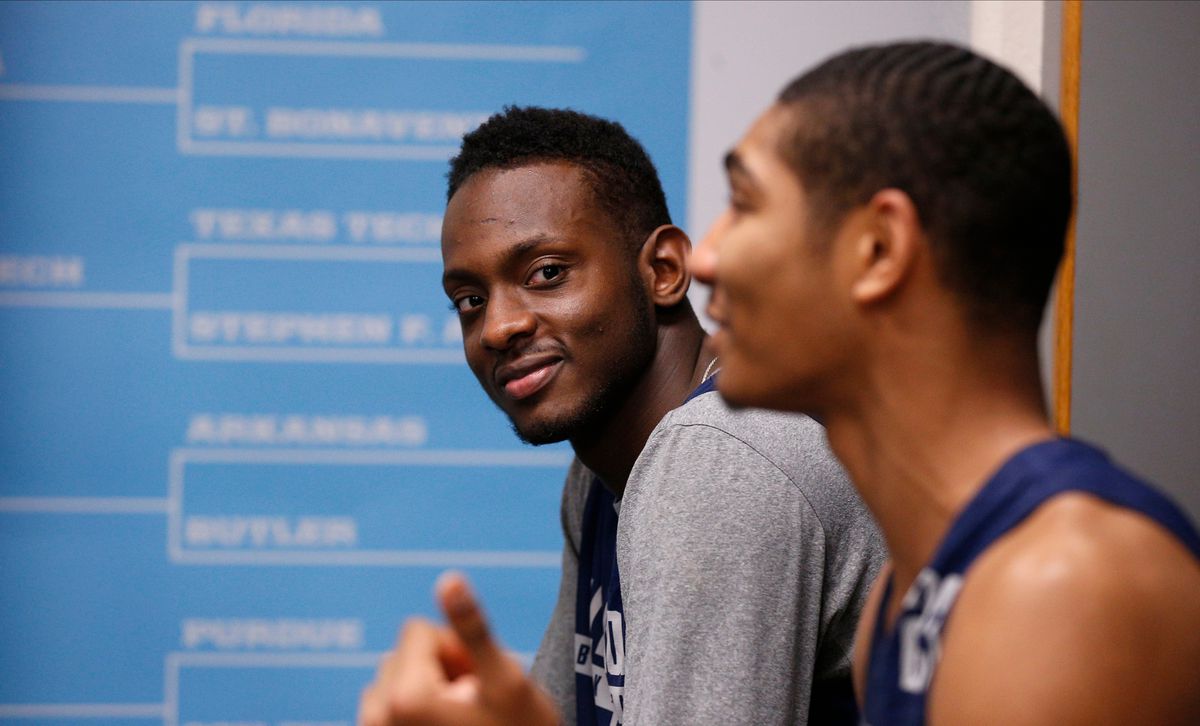 You are three quadrillion times more likely to be struck by lightning in your lifetime than you are picking a perfect bracket, so don’t sweat the early rounds. (Brynn Anderson / Associated Press)

You are three quadrillion times more likely to be struck by lightning in your lifetime than you are picking a perfect bracket, so don’t sweat the early rounds. (Brynn Anderson / Associated Press)

March Madness begins this week, and for non-basketball fans building a bracket can be somewhat intimidating. Don’t worry, we have you covered. Here are 10 simple tips to help you pick a strong NCAA Tournament bracket for your pool.

Don’t stress too much over the first and second rounds

You are three quadrillion (a three followed by 15 zeros) times more likely to be struck by lightning in your lifetimethan you are picking a perfect bracket, so don’t sweat the early rounds. According to research done by the NCAA using data from their Bracket Challenge Game, winners of those pools get, on average, just 25 of 32 first round games correct (78 percent). None of those were perfect through the first 48 hours of the tournament.

The success rate of those eventual winners in the second round even drops slightly: They get an average of 12 out of 16 winners (75 percent) correct. That equates to 11 incorrect picks through the first weekend of the tournament.

Discount teams that exit early from their conference tournaments

Part of what makes March Madness so entertaining are the upsets, yet since 2011, the first year the field expanded to 68 teams, the higher-seeded team has won 71 percent of the first- and second-round games. If you participated in bracket pools from 2014 to 2018 and simply picked the better-seeded team you would have placed in the 72nd percentile on average - not bad for little-to-no analysis.

According to data from the NCAA Bracket Challenge Game, there are between 12 and 13 upsets (defined as the winning team seeded at least two seed lines worse than the losing team) in the tournament per year in all rounds, with the first round providing half of those surprising finishes.

To find those upsets, you have a few options.

You could go with our DAViD metric, the Data-Assisted Victory Detector for the NCAA tournament (click here for the full explanation of the method), which highlights first-round upsets. You could also flip a coin, choose a mascot, pick the team in blue or, if you are comfortable with sports betting, check out the point spreads for each individual first-round game.

Joe Osborne from OddsShark found that teams favored by five or more points won 85 percent of their matchups in the tournament since 1996 while those favored by fewer than five won just 53 percent. Upset candidates by this method, using the consensus point spreads found at Vegas Insider, include No. 12 Oregon over No. 5 Wisconsin, No. 13 UC Irvine over No. 4 Kansas State, No. 10 Iowa over No. 7 Cincinnati, No. 12 Murray State over No. 5 Marquette, No. 10 Florida over No. 7 Nevada and No. 10 Seton Hall over No. 7 Wofford.

Look for 11 seeds to upset, not 12 seeds and definitely not 16 seeds

Strong choices on this seed line include No. 11 Ohio State over No. 6 Iowa State (32 percent chance of an upset) and No. 11 Saint Mary’s over No. 6 Villanova (49 percent chance), last year’s champion.

One of the First Four teams is going to surprise you

Again, don't focus on the No. 16 seeds, because they're not advancing. Instead key in on No. 11 Belmont. The Bruins offense - ranked 19th in the country per Pomeroy's ratings, which adjust for strength of schedule - could surprise No. 6 Maryland. Plus, the Terrapins offense turns the ball over 20 percent of the time - only No. 9 Baylor, No. 8 VCU and No. 16 North Carolina Central are worse among this year's tournament teams.

Be bold. Pick a Cinderella team (or two) to make the Sweet 16

Seeing a dark horse make it past the first weekend is always exciting. It’s even more gratifying when you correctly penciled them in on your bracket. The seeds that provide the best value historically are the No. 10, No. 11 and No. 12 seeds - they have reached the Sweet 16 more often than those gifted a No. 8 or No. 9 seed.

No. 11 Saint Mary's has the best chance out of all this year's double-digit seeds at reaching the Sweet 16 (15 percent) and comes with the added benefit of not being on many brackets - only eight percent of entrants in ESPN's Tournament Challenge have them going that far. No. 10 Iowa is another team whose chances to make the Sweet 16 (10 percent) are higher than the public's perception (5 percent).

Use analytics to separate teams in the Elite Eight

The most frequent matchups in the Elite Eight over the past eight years have been a No. 1 seed vs. a No. 2 seed (10 times; no other matchup has been seen more than three times), a difficult choice when trying to find the winner. For these close calls go with the consensus ranking curated by Kenneth Massey. He compiles the rankings of 62 different systems into a consensus ranking. The higher-rated team in that ranking wins 70 percent of the time.

No. 1 seeds have staying power

Top seeds are the top seeds for a reason: they are the best teams. And as such, they tend to go farthest in the tournament. On average, a No. 1 seed wins 3.4 games in the tournament each year and they account for almost two-thirds of all national title game participants (62 percent).

A perfect Final Four is nice, but not essential

Over the past eight years only a fraction of people (0.25 percent) have gone 4-for-4 and that dropped to 0.1 percent in 2018. You do, however, need to get two right, the same two teams that will face one another in the championship game.

If you are in a large pool (100 or more people) it pays to be bold here - that's the only way you can differentiate your pick from dozens of others. A No. 3 seed, historically, is underplayed (on 6 percent of brackets since 2011) relative to how often they appear in the Final Four (11 percent).

No. 3 Texas Tech is a good choice here. The Red Raiders have an efficient scorer in Davide Moretti (76 percent effective field goal rate, fifth highest among players with at least 200 field goal attempts in 2018-19) and one of the best rim defenders in the country in Tariq Owens (opponents are 3 for 21 against him around the basket this season).

When picking a national champion, stick with the top teams

Your championship game matchup should involve no seed worse than No. 5, as 14 of the last 16 championship games have involved teams seeded No. 1 through No. 5. Even more specific, 91 percent of tournament winners since 1996 have been a top-three seed, with No. 1 seeds winning 14 times.

No. 2 Michigan State is a solid, and contrarian, choice to be this year's national champion. The Spartans are the fifth-best team in the nation per Massey's consensus rankings with offensive rankings in the 93rd percentile around the basket (1.3 points per possession) and in the 89th percentile on shots beyond the 3-point line (1.1 points per possession, 37 percent shooting). Plus, they fit Mike Hume's Winner's Total Efficiency (WTEff) metric, a statistical bar that measures the combined offensive and defensive efficiencies of championship-caliber teams.

Whatever you do, don’t pick Duke to win it all. As of Wednesday morning, a tournament-high 38 percent of ESPN brackets have the Blue Devils as their pick despite their chances to win it all ranging from 15 to 30 percent. Even if you did believe Duke was the best team in the tournament, and they very well might be, this is about winning your pool, and seeing Duke exit early clears almost half the field from competition. Remember, getting the national champion pick right is worth 32 points in most formats, the same as going 32 for 32 in the first round.