As US nordic skiing championships approach in Anchorage, Jan Buron’s influence is everywhere 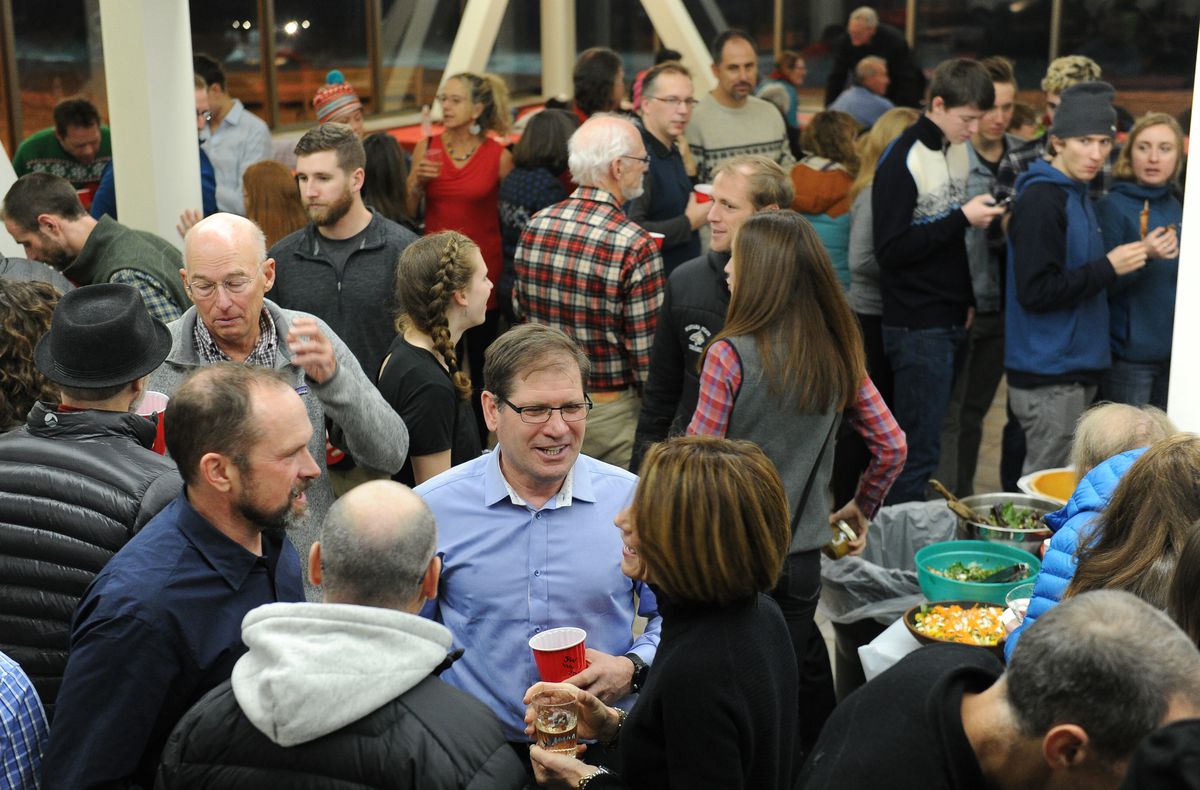 Jan Buron, center in the blue shirt, talks with a group at a holiday party for the Alaska Winter Stars at Kincaid Park last week.  (Bob Hallinen / ADN)

Jan Buron, center in the blue shirt, talks with a group at a holiday party for the Alaska Winter Stars at Kincaid Park last week.  (Bob Hallinen / ADN)

The day someone stole his mountain bike in New Jersey was the day Jan Buron decided it was time to yield to a friend's urging that he come to Alaska to work as a commercial fisherman.

The fishing thing was a sometimes-terrifying, six-month experience Buron chose never to repeat. But the Alaska thing worked out pretty well.

Some 25 years later, Buron's fingerprints will be all over the U.S. Cross Country Championships that begin Wednesday in Anchorage's Kincaid Park.

He's the coach of two junior-level racers who are among the best in the country — Gus Schumacher and Molly Gellert, who could challenge their elders on the Kincaid trails.

[The Olympics are approaching. Here's how Alaska skiers are getting ready.]

All are the products of Buron's Alaska Winter Stars club, which this winter is celebrating 20 years of turning out some of Alaska's best junior skiers.

Buron, 54, was a member of Poland's national ski team in the 1980s who immigrated to the United States in 1991. He wound up in New Jersey, where he had some cousins and friends, including one who had spent time commercial fishing in Alaska.

"I got a new mountain bike and somebody stealed it and at this moment — I don't like New Jersey. Two weeks later, we come to Alaska."

The fishing job was a harrowing six months, he said.

"The last two months we were 30 miles from the Russia coast," Buron said. "We had a fire on the boat and we were ready to jump into the Bering Sea at midnight. It was quite an experience, I tell you."

Things went better once Buron was back on land.

He visited Kincaid Park and decided to stay. After a year, he became a coach for the Alaska Sports Academy, run by Zenon Babraj, another Polish immigrant. By 1997, he started his own ski club, the Alaska Winter Stars.

In the two decades since, Buron has guided some of Alaska's — and the country's — top skiers. His athletes have claimed eight gold medals at the U.S. championships and 38 gold medals and 98 individual podium finishes at the U.S. junior national championships. He has twice been named the nation's domestic coach of the year by the U.S. Ski and Snowboard Association.

The Winter Stars program — which offers coaching for young juniors, high school-aged skiers and masters — is known for its structure. Each year there are about 70 to 100 people in the program, with this season's participants ranging in age from 12 to 66. Even the youngest athletes are expected to keep training logs.

"Winter Stars do more organized workout than any club in the United States," Buron said.

Kornfield, 26, skied for the Winter Stars and the Service Cougars, so he knows Buron well.

"A lot of his (methods) extend from him being from Poland and in a more structured training regime," said Kornfield, a two-time national champion and seven-time medalist at nationals.

"That's how he coaches us — a lot of drills, a lot of video technique work. During the week we would watch a video of our entire team and we would all sit around the TV and he would call on people: 'What do you need to work on?' It was intense. You would be put on the spot, but we would learn from each other and be more aware.

"We'd follow a very Eastern bloc-type (structure). A lot of drills, a lot of specific striding techniques. A lot of parking-lot work on roller skis."

But Buron made a lasting and critical impact on his career, he said.

"My work ethic, my drive, my focus — it's all from his original motivation, that we could become something internationally and nationally," Kornfield said. "I try to do everything Jan told me from the beginning. The initial stuff, the competitiveness, those are things I learned from him, even though maybe my technique has changed or my training has changed. That stuff is minute compared to the drive. That's what we learned from Jan."

As a racer in Poland, Buron was a national champion and a member of the World Cup team. Since coming to Anchorage, he has claimed medals at three U.S. Masters Championships, most recently in 2014.

His accomplishments as a coach and an athlete are vast, but Buron is about more than training and technique, said Lex Treinen, who after his time with the Winter Stars went on to become an NCAA All-America skier for UAA and a silver medalist at the 2015 U.S. nationals.

Treinen, 27, recalled an overnight Winter Stars training camp at Eklutna Lake back when he was in middle school.

"We were standing around a campfire in the light rain and Jan told the girls in the group to go on a walk. Us boys were all confused about why he would make only girls walk, but we soon found out," Treinen said by email. " 'Guys,' said Jan, 'why you never talk to girls?!' He went on to tell us that we were turning into losers who were only obsessed with skiing and how we needed to be more social.

"When the girls got back … he forced us to partner dance with the girls to some polka that he blared out from his Suburban. In the rain. In the middle of the mountains.

"The point is Jan always cared about what kind of person you were, not just how good of a skier he could make you and had a tough love way of getting a point across that is very rare in this day and age."

Buron gets his point across despite an accent so thick you might think he arrived from Poland last year, not nearly 30 years ago.

"My wife sometimes says I'm talking too fast," said Buron, who is married to Marta Ziembinska-Buron, a former world-class speedskater from Poland.

Most of the Winter Stars skiers are able to get past Buron's accent, Kornfield said. When he joined the club at age 9, he was attending a Japanese immersion school, and he thinks that helped him understand Buron's often-challenging English.

"You initially join the team and you have this Polish guy talking to you and it's a little intimidating but it doesn't take very long to learn he isn't intimidating at all," Kornfield said.

Skiers from other clubs or schools have a harder time figuring out what Buron is saying, he said.

"When he's on the side of the race course yelling things, I'm sure everyone else is just really confused," Kornfield said. "I'm sure they think we're talking in secret."

Buron said he learned English informally once he came to the United States.

"My language I could maybe spend more time (on)," he admitted, but as a coach he teaches more by action than words anyway.

"I'm not trying to make it boring, waiting, talking," Buron said. "It's what they did, what they can fix. Not so much talk, but show them.

Races are part of the Olympic selection process, although a number of Olympic spots have already been claimed by skiers on the World Cup tour. Those skiers are still in Europe and won't compete at Kincaid Park.

Races will also be used to select the World Junior and U-23 World Championship teams.