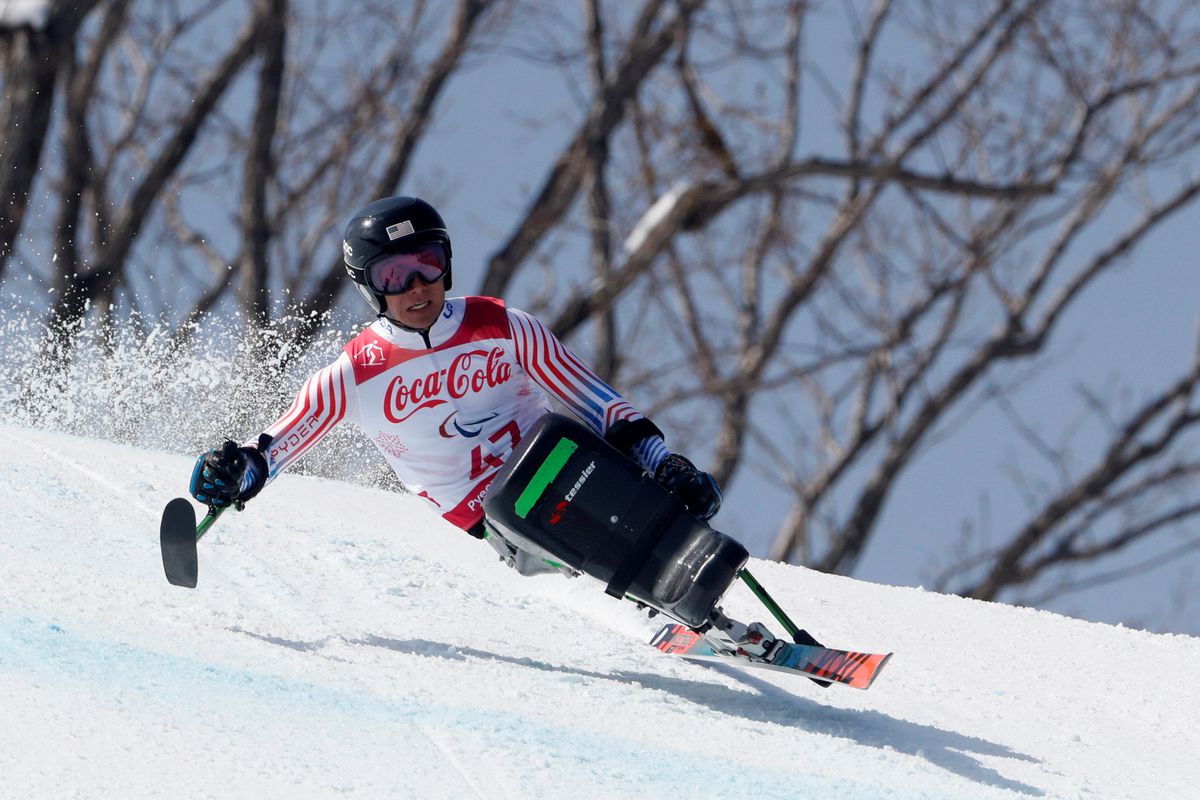 Alaska’s Andrew Kurka carries speed around a corner on his way to the gold medal in the sit-ski downhill race at the Paralympics Games in Pyeongchang, South Korea.  (Paul Hanna / Reuters)

Alaska’s Andrew Kurka carries speed around a corner on his way to the gold medal in the sit-ski downhill race at the Paralympics Games in Pyeongchang, South Korea.  (Paul Hanna / Reuters)

Andrew Kurka did exactly what he said he wanted to do — become the first Alaskan to win a gold medal at the Winter Paralympics — and he did it in remarkable fashion.

Kurka, a 26-year-old sit-skier from Palmer, blew away the field in the men's downhill on the first day of competition Saturday at the Paralympic Games in Pyeongchang, South Korea.

Kurka finished in 1 minute, 24.11 seconds with a blazing run no one else came close to matching.

What a run by @Andrew_Kurka! He wins the men's sitting downhill gold medal by over a second-and-a-half. #Paralympics pic.twitter.com/R8fhPH5O4P

The silver medal went to Japan's Taiki Morii, who was 1.64 seconds off Kurka's pace. Bronze-medalist Corey Peters of New Zealand trailed by 1.90 seconds, and everyone else was at least two seconds slower than Kurka.

"I have never won a downhill by 1.6 seconds, that is a huge margin in our sport, usually it's tenths or hundredths," Kurka told reporters after the race.  "… The best coaching staff in the world and amazing tech — I have never had such a fast ski in my life."

Others looked almost slow compared to Kurka, who carried speed from start to finish and posted the fastest time at every intermediate.

[Kurka comes off championship season with eye on Paralympics]

It was a dream run for a man who'd been targeting this race for four years.

At the 2014 Paralympics in Sochi, Russia, Kurka broke his back in a downhill training run. He didn't make it to the Opening Ceremonies, much less ski in any of the races.

Congratulations to Andrew Kurka, for winning the Gold medal in the Men’s down hill sitting event. Go USA, this is so exciting! #Paralympics #IPityTheFoolwhodontwatchtheParalympics #GoTeamUSA

Kurka was partially paralyzed from the waist down in a four-wheeler accident when he was 13. An athlete before and after his injury, Kurka developed his zeal for speeding down a mountain after he was injured.

He was the first mono-skier to descend Alyeska's Christmas Chute, a long, steep, narrow, scary elite-only run, and for years he raced with what you might call a reckless abandon.

Kurka broke a minimum of one bone per season from 2010 to 2015, and more often than not his seasons were interrupted or ended prematurely by injuries.

"It's been my journey to gold," Kurka said. "It makes it that much more meaningful, since I have broken my back, my femur, all the bones I have broken throughout my career. All the pain, all the anguish, all the doubt I have ever had, it's all worth it."

Kurka gets a shot at another medal Sunday in South Korea — Saturday in Alaska — when he competes in the super-G.