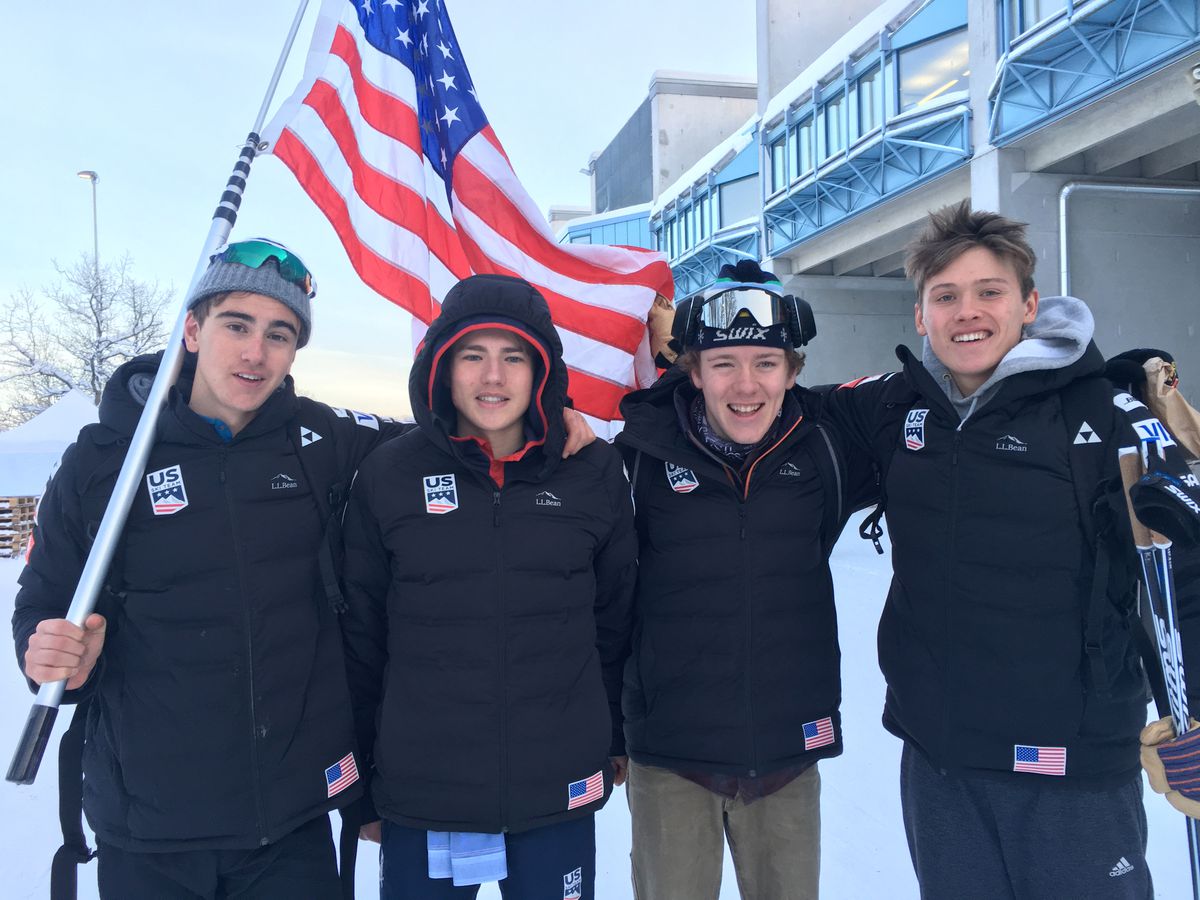 From left, Johnny Hagenbuch, Gus Schumacher, Ben Ogden and Luke Jager, Americans who finished in the top 20 of the 30K classic at the World Junior Championships in Lahti, Finland, Jan. 24, 2019. (Photo by Amy Schumacher)

From left, Johnny Hagenbuch, Gus Schumacher, Ben Ogden and Luke Jager, Americans who finished in the top 20 of the 30K classic at the World Junior Championships in Lahti, Finland, Jan. 24, 2019. (Photo by Amy Schumacher)

The United States enjoyed one of its best days in the history of the Nordic Junior World Ski Championships on Thursday, and Alaskans led the way.

Schumacher, an 18-year-old Alaska Winter Stars skier, finished a heartbeat away from victory. He was part of a four-man sprint finish in the mass-start 30-kilometer race and just missed becoming the first American man to win a World Junior individual medal.

“(I) just didn’t have quite enough double-pole speed in the finish,” Schumacher said by email, “but still so proud of the whole team today.”

She skied the last part of the women’s 15K race by herself, finishing 32 seconds behind the third-place skier and 24 seconds ahead of the fifth-place finisher.

With Kramer, Schumacher and Jager all in the top 15, it was as big a day for Alaska as it was for the United States.

“Feeling so much support from Alaska and the whole country the entire week and today especially,” Jager said by email. “It really takes an amazing community to be able to rival the insane ski culture that there is here and in much of Europe and Anchorage is showing that we have that.

“Every time we toe the line here we feel the culmination of efforts from all of the coaches we’ve ever had, athletes we’ve ever raced, people who have cheered for us from such a young age and of course the volunteers that make skiing in Anchorage happen.”

After breaking away from the lead pack with 2 kilometers to go, Schumacher and the three medalists put on a thrilling show in the final few hundred meters. Although DelFabbro never lost the lead, the others jockeyed for position behind him, the outcome uncertain until the very end.

“Definitely was kind of a crazy race in that it didn’t break up much at all, but it was super cool to have all the boys at the front for a lot of the race,” Schumacher said. “Started to break up in the last 2 (kilometers) when people started to go, and I didn’t have a lot in the tank but I was able to hang in the top 4.”

A pack of about 20 skiers led the race most of the way.

“It was super loose inside the pack,” Jager said. “Lots of broken poles. Lots of time spent in the lead alongside Gus and Ben. Tried to push the pace to thin out the group a little bit a few times from up front but the draft was so substantial that it seemed to pretty much just be a waste of energy.

“In the end I just didn’t have the energy in the crucial places in the last 2 (kilometers) and lost some positions but it was awesome to see Gus in there fighting for the medals.”

Schumacher and the three medalists finally created a gap; as a group, they finished about six seconds ahead of the next pack of racers.

Ben Ogden of Vermont was the second American, in 10th place, 9 seconds behind the winner. Jager was 13th, 14.9 seconds out of first place, and Johnny Hagenbuch of Idaho was 17th, 25.6 off the winning pace.

In the women’s 15K, Kramer finished 90 seconds behind winner Frida Karlsson of Sweden and 32.8 seconds behind bronze-medalist Anita Korva of Finland. Silver went to Helene Marie Fosseholm of Norwary.

Though the U.S. women have won a handful of medals at the World Juniors, Schumacher’s fourth-place finish marks the best individual finish by an American man in the history of the race series for skiers under 20.

He established the previous best on Tuesday by grabbing sixth place in the 10K freestyle race.

“(I) was pretty tired going into today,” Schumacher said, “but this morning I felt better and got a lot of energy when I saw how well the girls did.”