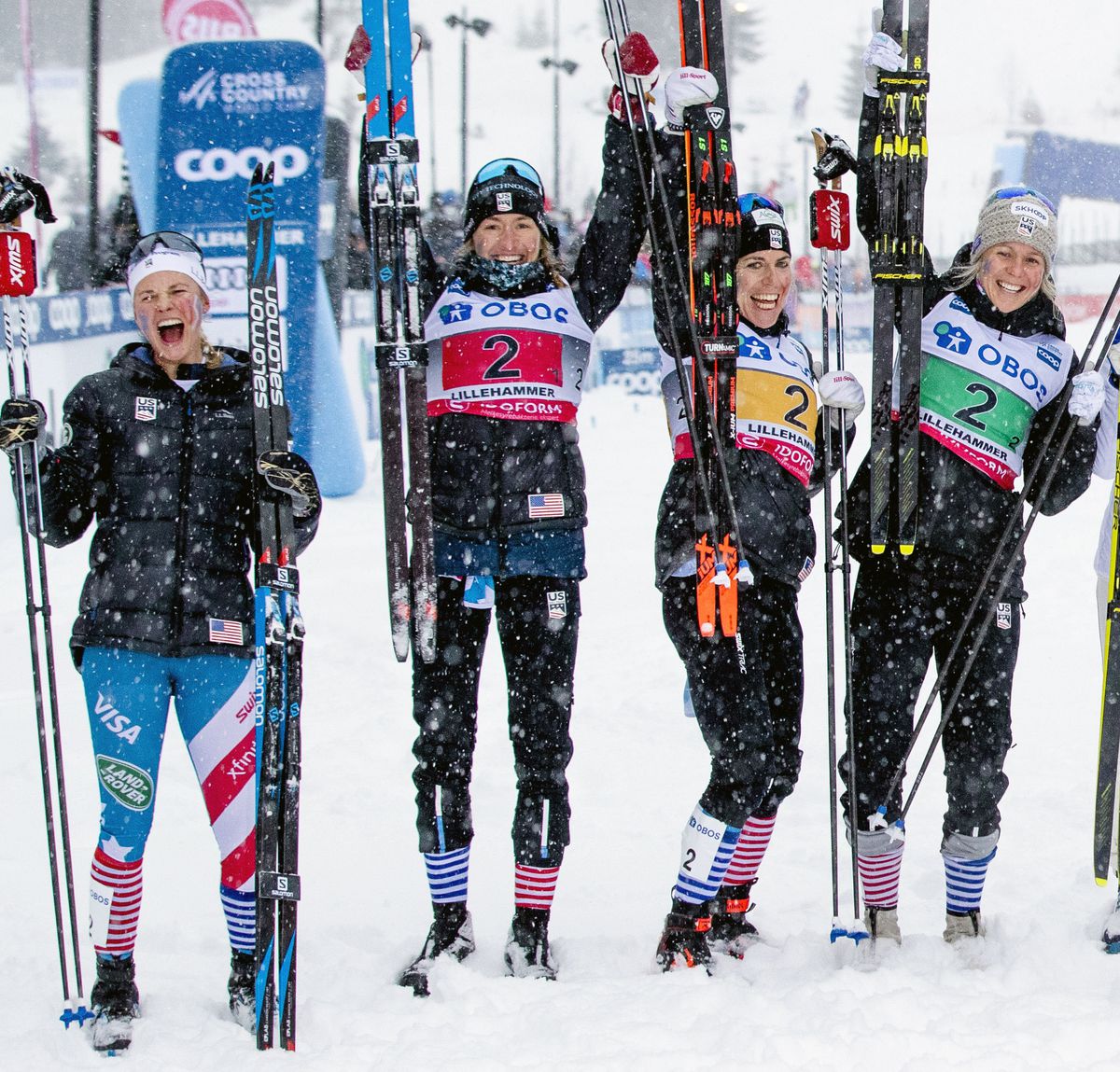 Sunday was relay day for World Cup skiers in Lillehammer, Norway, which for the American women meant face paint and red-white-and-blue striped socks.

Anchorage skiers Sadie Maubet Bjornsen and Rosie Brennan helped the United States win a silver medal in the 4x5-kilometer mixed-technique relay in Lillehammer, Norway, continuing a strong start to the season for the American women.

Relay races are popular with the U.S. women, who embrace the team aspect of the race and are almost always a threat to medal. Sunday’s was the fifth World Cup women’s relay medal in U.S. history and the first since the 2016 season.

“It is always an incredible day when we land on the podium as a team,” Maubet Bjornsen said by email. “Putting four perfect legs together is a huge achievement, which is why winning a team medal is so special.

“… It has been a few years since our group has stood on the podium for the 4x5km relay, so we were quite excited.”

Skiers contended with falling snow, “making for some messy and slow racing,” Brennan said by email.

“I love the grind of slow days so I just started to grind away and realized quickly that I was gaining time so I just kept the grind going,” she said. “I was working hard to catch Sweden and couldn't quite get there but at least tagged off to Jessie with them in sight and she's not someone you want to race against on relay day so I had full faith in her ability to reel them in.”

Diggins, who won Olympic gold with Anchorage’s Kikkan Randall in the team sprint at the 2018 Winter Olympics, was less than 10 seconds behind Sweden when she took over. She was more than 30 seconds ahead of the Swedes by the end of the race.

In the men’s relay, Russia finished 1-2 and Norway went 3-4. The Americans finished ninth, 3:33 behind the winners.

The men’s team included three skiers from Anchorage -- Erik Bjornsen, David Norris and Scott Patterson. Bjornsen, who is Sadie’s brother, put the Americans in sixth place after the first leg, but the team slipped into ninth place in the second leg and stayed there the rest of the race.

For the U.S. women, Sunday’s silver medal is indicative of how well the young season is going.

All three of those skiers ranked in the top 11 of the World Cup overall standings going into next week’s races in Davos, Switzerland. Diggins is fourth, Maubet Bjornsen fifth and Brennan 11th. Norway, led by Theresa Johaug, owns the top three spots.

The Americans planned to enter two women’s teams in Sunday’s relay, which would have put even more Alaskans on the Lillehammer trails. But the team of Julia Kern, Rosie Frankowski, Caitlin Patterson and Hilary Swirbul had to pull out because Swirbul was sick. Swirbul and Frankowski live in Anchorage and train with Maubet Bjornsen and Brennan on the Alaska Pacific University team; Patterson – sister of Scott – is a South High grad who trains in Vermont.

Even though the second team didn’t race, Maubet Bjornsen said everyone was part of Sunday’s success.

“Hailey Swirbul got sick this week, but was out on the final climb screaming ‘you can do anything for one minute.’ It helped me find one more gear to bring it home,” Maubet Bjornsen said. “That is the sure sign of an incredible teammate.

“Our team is at the level it is right now because of the belief and support like this. I believe that belief and success are contagious if you allow yourself to be part (of it).”