Hannah Halvorsen had big plans for the ski season. Getting hit by a car changed them. 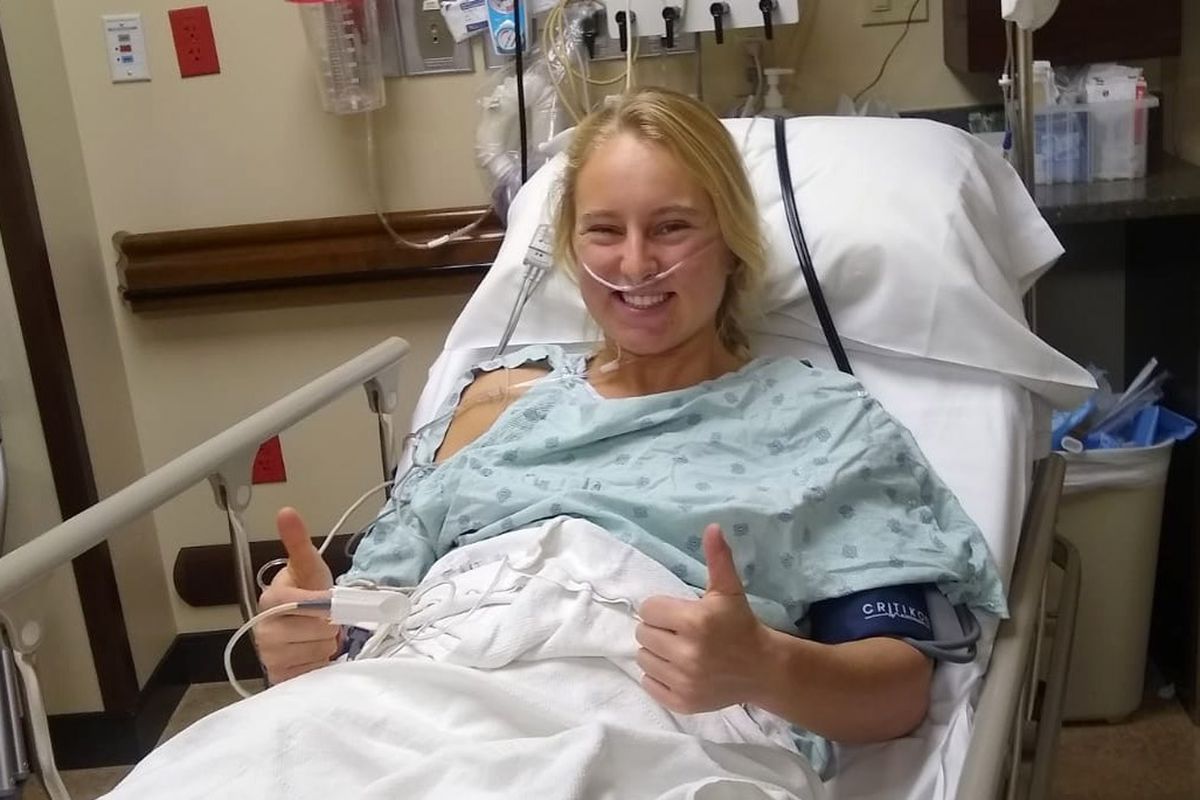 Hannah Halvorsen in the hospital after her Nov. 1, 2019 accident. (Photo by Julie Halvorsen)

Hannah Halvorsen in the hospital after her Nov. 1, 2019 accident. (Photo by Julie Halvorsen)

Hannah Halvorsen is a planner. She’s a 21-year-old cross-country skier with Olympic dreams and a plan to get there.

The plan brought her to Anchorage and the Alaska Pacific University ski program in 2017. She was an outstanding skier when she got here — she was a member of the U.S. women’s relay team that won a historic bronze medal at the World Junior Championships earlier that year — and she made big strides during her first two years at APU.

She won two medals at the 2019 U.S. Cross Country Championships, made her World Cup debut at the end of the season and was poised to get more World Cup starts at the start of this season. She hoped to contend for a medal at the U23 World Championships and a spot on the U.S. team for a World Cup sprint race in Minneapolis in March.

Then her plans were foiled.

On the evening of Nov. 1, Halvorsen was struck by a car while walking across a street in downtown Anchorage. According to an Anchorage police spokeswoman, an 80-year-old woman driving a Jeep west on West Seventh Avenue stopped at a stop sign before turning south on L Street, where she hit Halvorsen. The driver was cited with failure to yield to a pedestrian in a crosswalk, police said.

Halvorsen suffered a skull fracture, tibia fracture and complete tears of two ligaments in her left knee. There’s a 10-day gap in her memory. When she tells how she wound up on the hood of the Jeep before falling off and slamming her head on the street, they aren’t her recollections, they are those of a friend she was with. The bruising and swelling in her brain was so bad, doctors delayed knee surgery by a month to give things a chance to stabilize.

A ski season filled with promise ended before it ever started. A long rehabilitation began.

“I’m figuring out how to have the right mindset about all this,” Halvorsen said recently from Park City, Utah, where she is rehabbing at the U.S. Olympic Committee facility there.

“Because this was such a big injury — it was a near-death (experience) — it’s always coupled with this appreciation that I’m alive and I’m going to be able to walk again and I can see. I haven’t ever slipped too far from this realization. This could be so much worse. I really did get lucky in an unlucky situation.”

[Your support makes stories like this possible. Buy a digital subscription for full access to the Anchorage Daily News]

Eleven weeks after the collision, Halvorsen is living in Park City with a family she knows from skiing, and she’s spending her days sleeping, going to rehab and visiting a variety of doctors. She’s wearing glasses for the first time in her life because the injury to her head damaged the part responsible for visual processing, leaving her nearsighted.

The woman who once raced on ski trails all over the world now spends three to five hours a day doing physical therapy so she can walk on her own again. She bends her knee and activates her quadriceps by repeatedly stepping on and off a small bench. She engages in single-leg spin biking. She uses a rowing machine with one leg. She gets around on crutches and wears a brace to keep her broken shinbone steady until the posterior cruciate ligament at the back of her knee fully heals.

This is all progress. All part of a new plan, one that starts with the simple process of moving forward. With hard work and patience, it ends with Halvorsen skiing at an elite level once again.

“If she wants to be back, she’ll be back,” said Hailey Swirbul, a good friend and an APU teammate. “She has a strong mind. She can do whatever she chooses.”

Yet the accident rattled Halvorsen’s friends and teammates. For 10 days, the first five at Providence Alaska Medical Center, Halvorsen slept 18 to 22 hours a day and was confused when awake.

“I didn’t know my name or couldn’t answer certain questions like what month it was,” she said.

She said she continues to struggle with some brain-related issues, and she lost her sense of smell and sense of taste. Her speech is not impaired and she posts upbeat updates about her recovery on Instagram. Although she is sad she missed the chance to push her ski career forward this season, she is grateful she was spared permanent physical injuries.

“I had a good season last year, I did my first World Cup and was on track to do more World Cups this year,” she said. “Maybe being too young, I don’t realize how fragile life is — you think there’s more of a guarantee, and then all of a sudden it’s gone.

“It’s definitely been an adjustment, because I’m a planner. I had goals. I wanted to race in that World Cup in Minneapolis (and) I expected to race at the U23 championships and try to get a medal there. I was so focused on those things, and now they’re irrelevant. And I have to make a whole new plan: What am I going to do with my year now?"

To begin with, Halvorsen intends to return to Anchorage in March so she can continue her schoolwork at APU, where she is a junior studying psychology. By this summer, she hopes to join other APU skiers for on-snow training at Eagle Glacier.

Halvorsen had her knee repaired at the Steadman Clinic in Vail, Colorado, which specializes in orthopedics and putting injured U.S. Ski Team members back on their feet. Her surgery was deemed a complete success, and when it was over, her first question was when she could ski again.

“He said nine months from surgery. That may have been more of an alpine estimate, so I think it will be maybe closer to seven months, which would put me some point this summer up at (Eagle Glacier),” Halvorsen said.

A more immediate goal of going to the Minneapolis races as a spectator so she can cheer for her teammates is less certain. Halvorsen isn’t sure she will be mobile enough to do that, and she isn’t sure she can afford it.

She is on her dad’s health insurance policy, but her career as a skier is independently funded. She held a fundraiser last month in her home town of Truckee, California, and she continues to raise money online through Paypal and Venmo.

She has a handful of ski sponsors but they are result-based, so she can’t count on them this season. One of her initial goals for the season was to ski well enough to earn a promotion from the U.S. Ski Team’s development team to its B team, which would cover many travel costs for races and training camps, but that can’t happen now.

Halvorsen said she felt blue at times earlier this month while watching the U.S. Cross Country Championships from afar as her teammates collected national championships. But perspective tempers her sadness.

“Every time I’ve been to a doctor’s appointment, every single doctor I have seen has said the same thing — this is a miracle,” Halvorsen said. "My brain doctor said 50 percent of people who get hit where (I) got hit are blind. My knee doctor said everything is fixable, there is no permanent damage. To hear it from a medical perspective makes it more factually true — I really did get lucky.

“Not to say I’m not ever bummed. I want to be racing."

As she works toward that end, Halvorsen said, she will move forward slowly and deliberately.

“I definitely believe as long as I have patience and logical expectations, I can come back better than I was. With enough time, I think I can,” she said.

In fact, she’s planning on it.