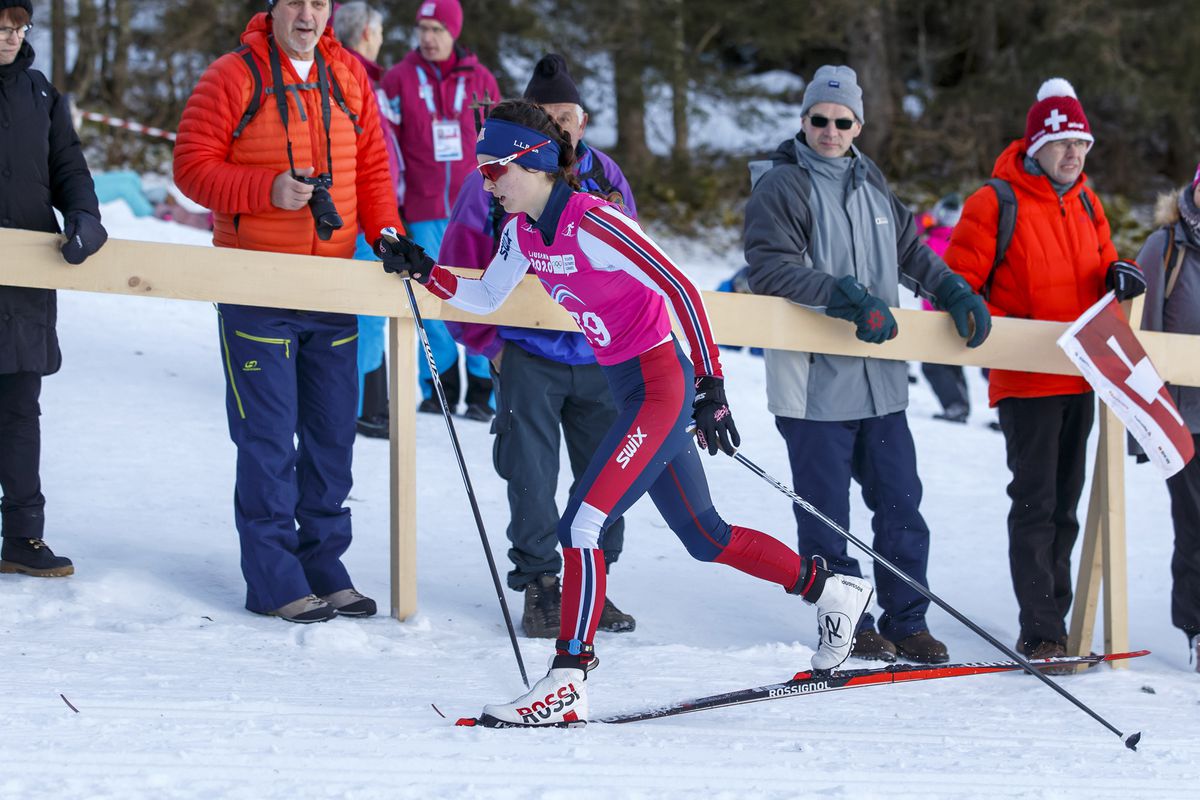 Kendall Kramer skies past spectators en route to a third-place finish in the 5K classic race Tuesday at the Winter Youth Olympics In Lausanne, Switzerland. (Salvatore Di Nolfi/Keystone via AP)

Kendall Kramer skies past spectators en route to a third-place finish in the 5K classic race Tuesday at the Winter Youth Olympics In Lausanne, Switzerland. (Salvatore Di Nolfi/Keystone via AP)

Fairbanks skier Kendall Kramer has won numerous medals at state championships and junior national championships, but until this week she had only flirted with a medal on a worldwide stage.

On Tuesday, Kramer registered one of the biggest results of her career by capturing a bronze medal at the Winter Youth Olympics in Lausanne, Switzerland.

Cheered by her mom and grandfather, who were wearing “Team Kramer” scarves, Kramer finished third in the girls 5-kilometer classic on a day when the United States won two medals in cross-country skiing. Will Koch of Vermont claimed the other with a third-place finish in the boys 10K classic race.

Kramer’s medal came in her third race at the Winter Youth Olympics, held every four years for athletes 18 and younger. Nearly 2,000 athletes from 79 countries are competing in the multi-sport competition, which started Jan. 9 and ends Wednesday.

Kramer, a 17-year-old senior at West Valley High School, was coming off finishes of 16th place and 25th place in a pair of sprint races on the weekend. The results left her dissatisfied and eager to make amends.

“I felt disappointed after the sprint races,” Kramer said in a news release from the U.S. Olympic Committee. “… So what really motivated me today was thinking about how I want to make people back home proud when they see results.”

Kramer finished 20.6 seconds behind gold medalist Maerta Rosenberg of Sweden, who won in 14 minutes, 15.7 seconds, and eight seconds behind silver medalist Siri Wigger of Switzerland. She was seven seconds ahead of teammate Sydney Palmer-Leger of Utah, who placed fourth.

Kramer made it onto the podium Tuesday to collect her first medal at a big international competition. It was an important step in her career, one she envisioned as soon as she learned she had qualified for the U.S. team competing in Lausanne.

“As soon as I knew that I was in the Youth Olympic Games, I really wanted to get a podium in this race specifically, so I’m really glad I could make the people back home proud and make myself proud,” said Kramer, who qualified for the competition with her results at the U.S. Cross Country Championships in Michigan earlier this month.

“The U.S. cross-country team has been historically underrated and it’s not expected for us to be up there with the athletes from countries like Norway and Sweden," Kramer said "... But I really, really enjoy every time that I can show that we are up to par with them and that we have the exact same training quality, and that we’re really catching up year by year.”

For many, many years, U.S. skiers lagged behind Europeans. Will Koch, Tuesday’s other medalist, is the son of Bill Koch, whose silver medal at the 1976 Winter Olympics was America’s first in the sport. The U.S. Ski Team didn’t win another Olympic medal in cross country until the 2018 Games, when Anchorage’s Kikkan Randall and Minnesota’s Jessie Diggins won the gold medal in the team sprint.

Kramer is part of a generation inspired and elevated by the milestones Randall registered in her long career. Along with other young Alaska skiers like Gus Schumacher and Hailey Swirbul, she is keeping the United States competitive on a worldwide stage.

The medals collected by Kramer and Koch are the first earned by American skiers at the Winter Youth Olympics, which were first held in 2012.