A year after suffering debilitating injuries, Anchorage skier Hannah Halvorsen is headed to the World Cup 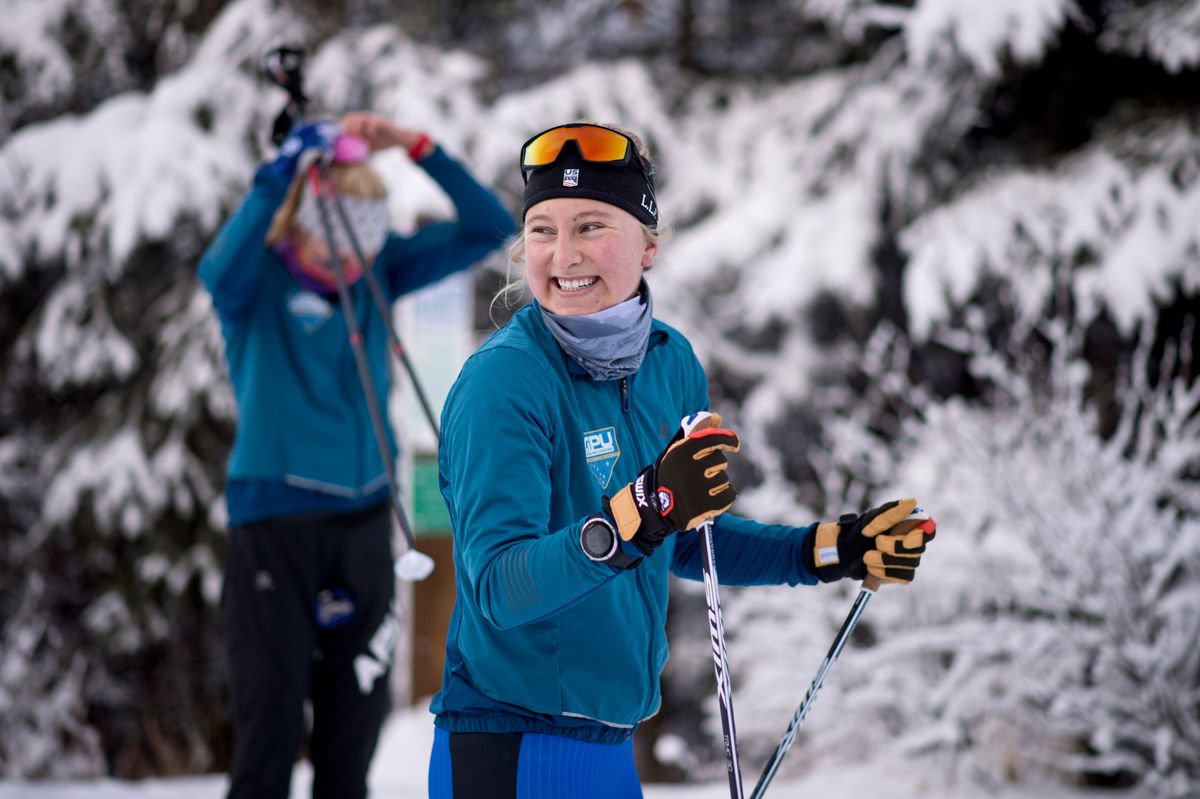 It’s been a little more than a year since the day world-class skier Hannah Halvorsen was crossing a street in downtown Anchorage and was hit by a car and injured so badly that she doesn’t remember the accident or its immediate aftermath.

It’s been one month since she skied again for the first time.

So of course the next step for the rising star is the World Cup race circuit.

Unlike the baseball player whose comeback means time in the minor leagues after a significant injury, Halvorsen is going straight to the major leagues.

The 22-year-old plans to head to Europe in early December with several other members of the Alaska Pacific University elite ski team for the first period of World Cup cross-country racing. In her first competition since suffering serious injuries — complete tears of two ligaments in her left knee, a broken tibia, a skull fracture, a traumatic brain injury — Halvorsen will go head-to-head against the best skiers on the planet.

“Isn’t that crazy?” she said last week after a training session.

Halvorsen’s decision to pick up exactly where she left off before her accident — for the first time in her career, she was poised to begin last season on the World Cup tour — is partly due to COVID-19.

The pandemic led to the cancellation of the domestic race season in North America, including the SuperTour race series that Halvorsen has previously competed in.

But World Cup racing is still a go, although some cancellations are happening there too. And Halvorsen is so eager to resume her racing career that she’s willing to compete at the highest level despite not being entirely back to top form.

“If you saw her at training today and you didn’t know about the accident, you probably wouldn’t realize how much work she’s done to get on her skis again,” APU coach Erik Flora said. “She looks great on her skis.”

[Hannah Halvorsen had big plans for the ski season. Getting hit by a car changed them]

Flora said he never would have predicted how well Halvorsen has progressed, although he said she isn’t in World Cup shape yet.

Ideally, he said, Halvorsen would ease into competition by racing in Alaska and the Lower 48, but COVID-19 is steering her to the World Cup. The already-slim race opportunities in this country got slimmer over the weekend when the Nordic Ski Club of Fairbanks cancelled two weekends of FIS racing, including a season-opening race series scheduled for this weekend.

Doctors have approved Halvorsen’s return to competition, but "as far as regular race form, she’s not there yet. The best estimate is we would see that more in mid-winter or late winter,” Flora said.

The risk, he said, is Halvorsen being demoralized by racing against the best skiers on the planet when she’s not yet at her best.

“If she goes over and uses this as a test-ground to see where she’s at and comes back and has good training for the second part of the season, from that perspective it is a really positive experience,” Flora said. “The only risk I see is it could be disappointing and hard emotionally.”

Bring it on, Halvorsen said. She’s got bigger worries than trying to chase down skiers like Therese Johaug and Jessie Diggins.

Among Halvorsen’s injuries was whiplash that still causes severe neck and back pain. When a woman driving a Jeep hit Halvorsen in a crosswalk on Nov. 1 of last year, Halvorsen landed on the hood of the car before being tossed violently to the pavement.

“I still can’t sit on the couch for more than an hour,” Halvorsen said. “My back is still bad. Every time I step up in training, my neck hurts too. ... I have a special pillow to sit on when I’m doing my homework. Mainly I deal with it by changing position — I start my homework at a table, then I lay on the floor on my stomach or sit at a counter.”

Which brings us to Halvorsen’s biggest worry about making her comeback at a World Cup race.

"People ask me, ‘What are you most afraid about going to the World Cup?’ '' she said. “Racing the best people in the world is not it. Sitting for that long on a transatlantic flight is the most scary part for me. Even the flight to Seattle is very painful. I get up and walk when I can.”

Halvorsen continues to deal with other issues too. She still can’t smell or taste because of her brain injury, and her vision isn’t completely back to normal. “I see stars a lot, but hopefully it will come back in time,” she said.

Halvorsen has a 10-day gap in her memory beginning with the day of the accident. Surgeons had to delay knee surgery because her brain was too swollen to operate immediately, and she continues to spend hours in physical therapy every week.

Halvorsen said her return has been a slow progression. For weeks she couldn’t even walk. When she was allowed to start running again in June — more than seven months after her accident — she was restricted to 30 seconds at a time. Each week she could add another 30 seconds as long as she had no knee pain.

[Hannah Halvorsen is walking and biking again, thanks to hard work and Zoom therapy sessions]

She had surgery in Colorado and rehabbed in Utah before returning to Anchorage in June. Later that month she hiked Bird Ridge — one of many milestones — and in July she began roller-skiing.

She skied for the first time on Oct. 19 at Glen Alps. She wore sunglasses, so she’s pretty sure no one saw her cry.

“It felt very peaceful, and with the mountains and sun it just looked really pretty,” Halvorsen said. “It was a reminder of why we do this. I like everything we do because I like the challenge — roller-skiing, running, going to the gym — but we are skiers. This is who I am.”

More specifically, Halvorsen is a ski racer, and racing is what she does. As she prepares for World Cup racing she knows she isn’t in World Cup form, but she is ready all the same.

“It is on the early side, not from the risk factor but from being able to have the best race of my life,” she said. “Is it really the right choice? Should I stay here and train? Part of it is I didn’t get to race for a year, and there’s the excitement to get back (to) the whole scene of it and traveling with my team.

“Even if my results aren’t the best, it’s what gets me out of bed in the morning.”