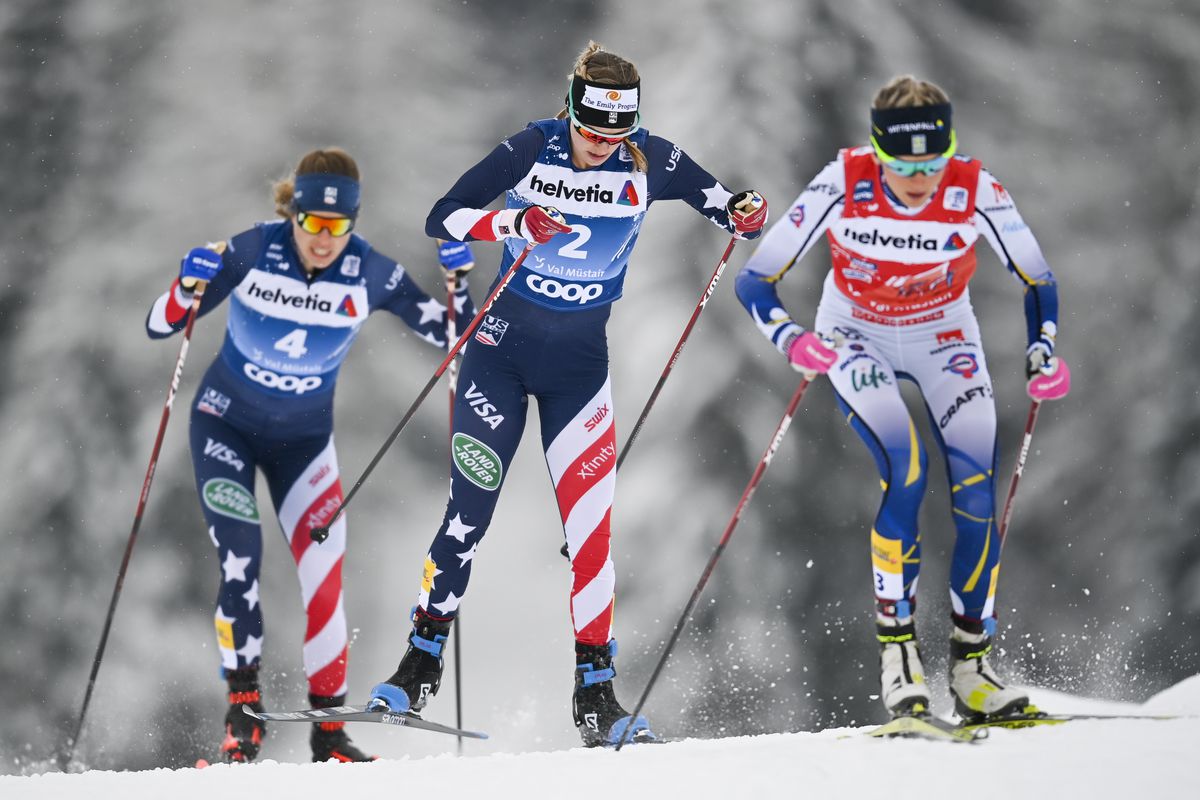 The Anchorage woman claimed second place in a 10-kilometer freestyle pursuit race to help give the United States an unprecedented 1-2 finish in a World Cup cross-country race.

The showing came in the third race of the 2021 Tour de Ski, and it puts Diggins and Brennan atop the Tour’s overall standings after three races in Val Mustair. Monday is a rest day before the Tour resumes in Italy with the final five races of the demanding 10-day, eight-race series.

“It’s a pretty cool feeling to ... realize that two Americans are 1-2 in the Tour right now!” Brennan said by email.

Just as cool: By posting three top-6 finishes in Val Mustair, Brennan maintains possession of the World Cup overall lead -- and the precious yellow bib that by tradition is worn by the global leader.

Brennan, 32, became the second American in history to wear the yellow bib when she took over the World Cup lead with two straight victories in mid-December, and she’s the first to wear it for an extended period.

“It was a surreal day to be starting the Tour de Ski with the yellow bib,” Brennan said after Friday’s opening race.

Brennan’s success comes during a stretch when world power Norway continues to sit out World Cup competition because of concerns over COVID-19. Sweden and Finland, two other strong contingents, skipped December races for the same reason but are fielding teams for the Tour de Ski.

No team is taking better advantage of Norway’s absence than the American women, who currently boast three skiers in the top 12 of the overall World Cup standings -- Brennan, Diggins (third place) and Hailey Swirbul of Anchorage (12th place). Brennan and Swirbul train together at Alaska Pacific University.

Though the absence of the world’s best skiers is notable, Brennan and Diggins are part of a U.S. women’s team that was competitive long before Norway took a seat. Diggins won Olympic gold in the team sprint with Anchorage’s Kikkan Randall in 2018, and in last year’s final overall World Cup standings Diggins finished sixth, Sadie Maubet Bjornsen eighth and Brennan 17th. (Bjornsen, another APU skier, delayed the start of her season and will join the American team later this month.)

On Sunday, Diggins and Brennan teamed up with Sweden’s Frida Karlsson to attack a 2.5-kilometer loop and take control after two laps. By the 5K mark, they were 24 seconds ahead of everyone else.

Karlsson pushed the pace and was leading before the final downhill, where she was passed by both Americans. She finished 10.7 seconds behind Diggins and 5.1 seconds behind Brennan.

“I was fortunate to start in a strong group with Jessie and Frida,” Brennan said. “We are all workhorses so I knew it was going to be game-on from the start.“

The effort was made harder by the impacts of three straight days of racing, Brennan said.

“The fatigue of the tour starts to settle in about this time,” she said. “I am very proud of my effort today because it wasn’t a dream day of feelings in my body.”

The Tour de Ski started Friday with a freestyle sprint, followed by a 10K classic Saturday and a 10K freestyle pursuit Sunday for the women. Men skied 15 kilometers Sunday.

Among the U.S. men, Anchorage skiers Gus Schumacher and Scott Patterson have led the way in the distances races.

Schumacher, an Alaska Winter Stars skier in his first season on the World Cup tour, and Patterson, an APU skier, both scored World Cup points in Sunday’s 15K freestyle pursuit.