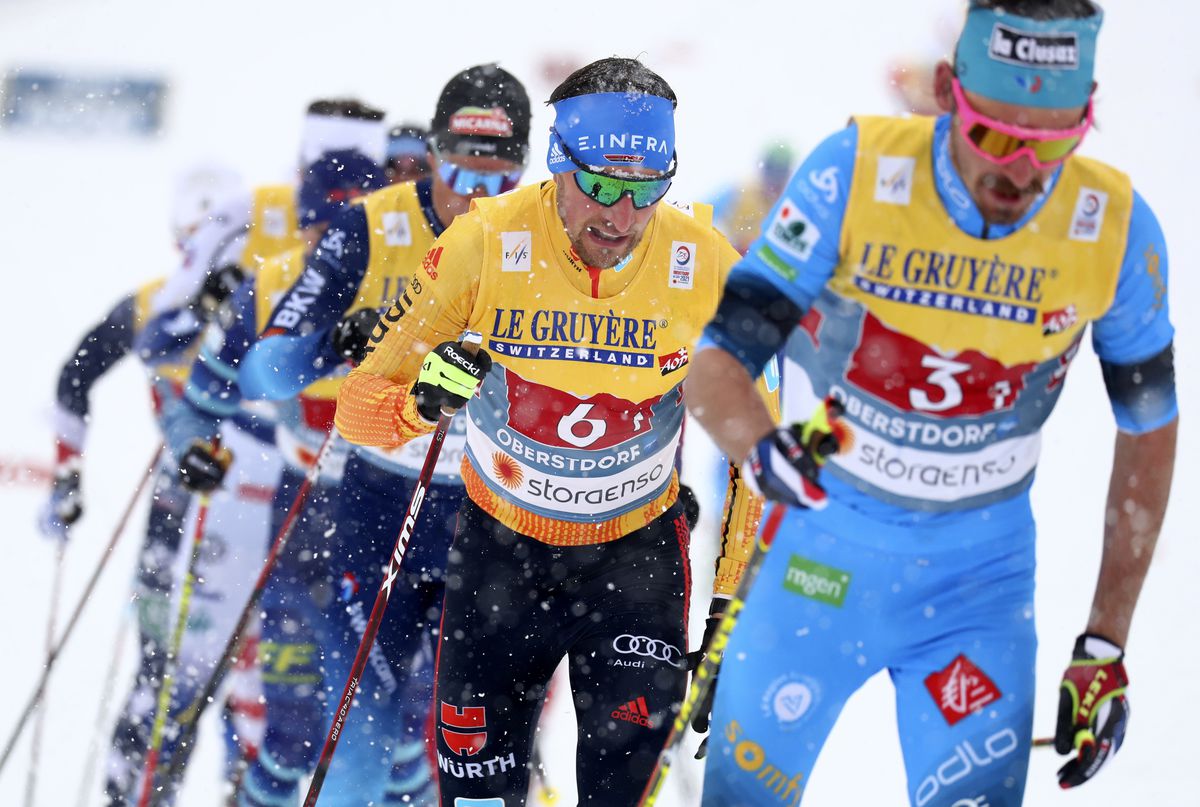 Skiers bunch up during the first leg of the 4x10-kilometer men's relay race at the World Championships on Friday in Germany. (AP Photo / Matthias Schrader)

Skiers bunch up during the first leg of the 4x10-kilometer men's relay race at the World Championships on Friday in Germany. (AP Photo / Matthias Schrader)

Three Alaska skiers had a hand in one of the best finishes in history by an American men’s relay team Friday at the Nordic World Championships in Oberstdorf, Germany.

David Norris, Scott Patterson and Gus Schumacher teamed up with Colorado’s Simi Hamilton for an eighth-place finish in the 4x10-kilometer relay.

You have to go back to 1976, when the Olympics and World Championships were held concurrently in Lake Placid, to find a better World Championship finish by a U.S. men’s team. An American team featuring Bill Koch placed sixth in that race.

“... That was the most fun relay I have ever skied on the World Cup or World Champs.”

Schumacher, a 20-year-old Alaska Winter Stars skier, turned in the fourth-fastest anchor leg of the day to lift the Americans from 10th place to eighth. Earlier in the week, he and Hamilton made it to the semifinals of the team sprint.

Norway claimed its 11th straight relay championship with a time of 1 hour, 52 minutes, 39 seconds. Russia was second and France was third.

The United States finished nearly three minutes behind the Norwegians and was 38 seconds behind seventh-place Germany, which got a big boost from anchor-leg skier Friedrich Moch. He fended off Schumacher by posting the third-fastest time of the leg, but the two were neck-and-neck for a while.

“It was fun to just feel like I had some fight to give,” Schumacher told U.S. Ski and Snowboard. “I knew he was a really strong skater and distance skier, and especially on the climbs, so I strung out a (few), but I didn’t want to lead so much.

“... In my mind, if I would have made it to the top of the climb with him, I think I could have beat him to the line, but I wasn’t able to close the door enough.”

The eighth-place showing is one position better than the Americans’ ninth-place showing at the 2019 World Championships. That team included Patterson, Norris, Anchorage skier Erik Bjornsen and Minnesota skier Kyle Bratrud.

No American team has posted a better World Championships finish since 1976, when the Winter Olympics doubled as the World Championships in Innsbruck, Austria. The team of Tim Caldwell, Bill Koch, Doug Peterson and Ronny Yeager placed sixth among 16 teams.

In 1980, when the Olympics and World Championships again were held concurrently, the U.S. team of Koch, Caldwell, Jim Galanes and Stan Dunklee finished eighth. Galanes went on to become the head coach of Alaska Pacific University’s nordic program, a position now held by Erik Flora.

The best Olympic relay finish by the American men came at the 2002 games in Salt Lake City, where John Bauer, Kris Freeman, Justin Wadsworth and Carl Swenson placed fifth in a field of 15 teams.

Norris skied the first leg and tagged off to Patterson, his APU teammate, in 11th place. Patterson kept that position, Hamilton moved up one spot to 10th on the third leg, followed by Schumacher’s fast anchor leg.