Shootout brought big-time college basketball to Alaska, and sometimes into our living rooms 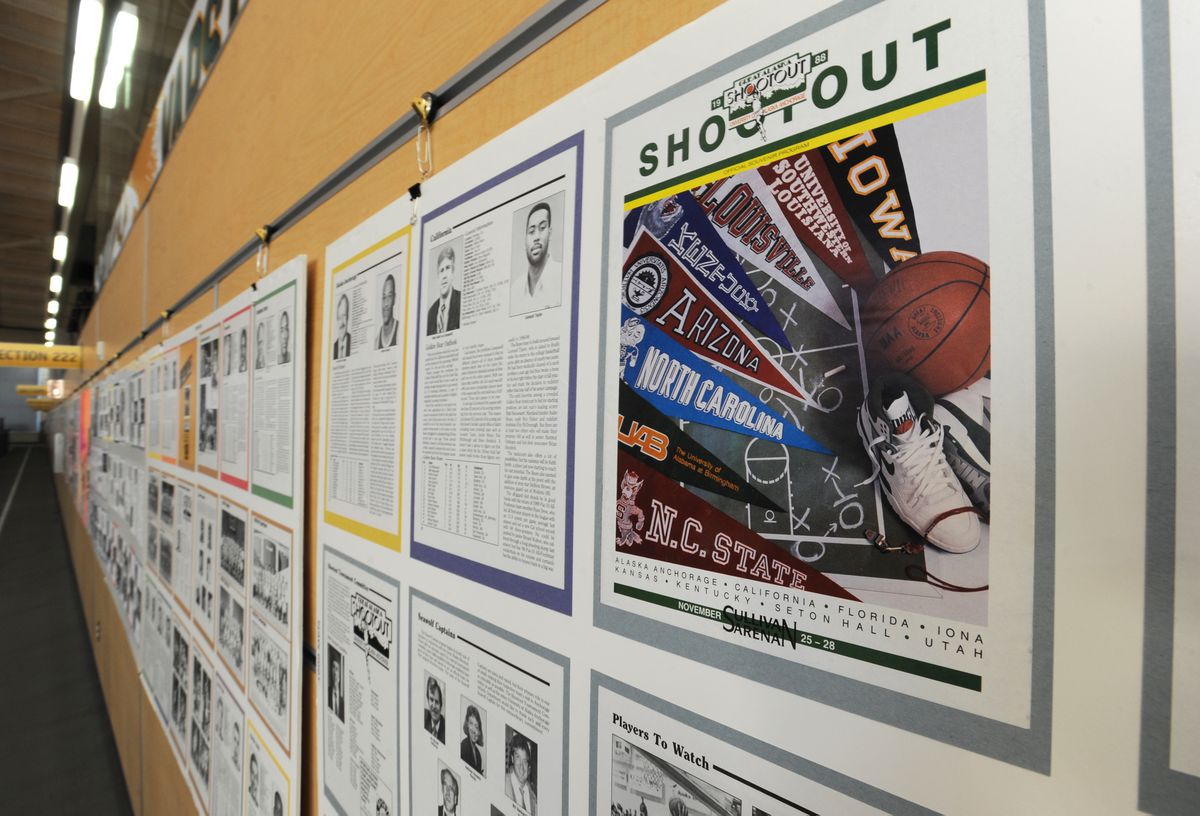 A souvenir program from the 1988 Great Alaska Shootout is part of an Alaska Airlines Center display for the 40th and final edition of the college basketball tournament. (Bill Roth / ADN)

A souvenir program from the 1988 Great Alaska Shootout is part of an Alaska Airlines Center display for the 40th and final edition of the college basketball tournament. (Bill Roth / ADN)

Ron Petro, a former athletic director at UAA, remembers a night during the 1985 Great Alaska Shootout when he and his wife Sally hosted a reception at their house that included three of college basketball's biggest names.

It was a legendary lineup of coaches: Jerry Tarkanian of UNLV, Rollie Massimino of Villanova and Lute Olson of Arizona.

With so many larger-than-life personalities in a single room, who managed to dominate?

"A priest from Villanova," Petro said.

Bobbi Olson, a longtime UAA booster, remembers the time during the 1994 Shootout when she and her husband Jim invited the Oklahoma State team to their house for Thanksgiving dinner.

UAA was scheduled to play the Cowboys later that season and when Oklahoma State coach Eddie Sutton learned the Olsons were traveling to Stillwater for the game, he invited them to stay at his home.

For 40 years, the Great Alaska Shootout, now sponsored by GCI, has done more than bring Division I college basketball to Alaska.

It brought college basketball to our lives, and sometimes even into our living rooms.

Sure, not everyone got to share dinner with Coach K and the Duke Blue Devils. But this week at the Alaska Airlines Center, you won't need to look too hard or too far to find someone who has talked fishing with Bob Knight or Denny Crum or has talked hoops during an elevator ride with this team or that team.

"Over time there's been a lot of made-for-TV events played in convention centers or ballrooms," said Tim McDiffett, the interim athletic director at UAA who's been around for every Shootout.

[What to see, where to park at the Great Alaska Shootout]

"Our event was special, I think, because it was really embraced by the community and it was operated by a school, not a third party. The whole Thanksgiving dinner program, where people would open their doors to teams. Some of the relationships that were formed, those are things that don't happen every day, and that made the event special."

No other tournament could replicate this scene from the 1996 Shootout championship game: The winning team had both a priest and an Iditarod champion on the bench.

The team was Kentucky, which earlier in the week had visited Martin Buser's dog kennel in Big Lake. A player rode off alone on a snowmachine, got lost for nearly two hours and only made it back after running into two locals who knew where to go when the player said he was looking for "this guy who had won a big race."

A relieved Rick Pitino invited Buser and his sons to sit with the Wildcats during the championship game. The priest was there because Kentucky traveled with a priest that season.

If it sounds like priests are a continuing theme at the Shootout, consider that at the beginning, many people never gave the tournament a prayer of a chance.

The first tournament in 1978 – called the Sea Wolf Classic — was the dreamchild of Bob Rachal, a UAA basketball coach who was fired before his crazy idea of bringing a Division I tournament to Anchorage became reality.

Rachal had discovered a rule in the NCAA manual that allowed teams to play games in Alaska, Hawaii and Puerto Rico without having to count them against their season limit. Called the exemption rule, it was adopted to encourage the growth of college athletics at geographically remote universities.

Rachal figured any coach would jump at the chance to play some "free" games at the start of the season, and he found seven of them who signed contracts to come to Anchorage in November 1978. In return, UAA would pay each team $8,000 for travel costs.

After Rachal was fired and the contracts were discovered, UAA administrators decided it would be easier and maybe even cheaper to put on the tournament than break the contracts.

Sullivan Arena hadn't been built and "The Nutcracker" was being staged at West High, so the tournament was played at Fort Richardson's Buckner Fieldhouse. The field: Louisville, Indiana, N.C. State, Texas A&M, Lamar, Pepperdine, Penn State and UAA.

At the time, McDiffett was a sportswriter who covered the tournament for the Anchorage Times.

"Honestly, it was kind of like, really? Are these people really going to come up to Anchorage?" he said. "There was some skepticism, I have to admit.

"I remember walking into Buckner and seeing these teams warm up – Louisville with Denny Crum, Norm Sloan with N.C. State – and it was surreal: 'Wow. This is really happening, and these people are really here.'

"It was a little bit like the Twilight Zone.''

And that only gets us through the mid-1980s.

Olson has seen nearly every Shootout game – she missed a few in 2015 when she and Jim were moving into a new house – and she realized from the start how lucky Anchorage was.

"It was one of those things where people did not even know where the Fort Rich arena was," she said. "I'd say, 'You've gotta find it, because this is an epic thing.' ''

The 1980s and 1990s were the tournament's glory years. The Shootout made enough money to fuel a big chunk of UAA's athletic department budget, it was an annual Thanksgiving week staple for ESPN and it made Anchorage the center of the college basketball world for one bright, shining week.

The four-day 1996 Shootout set an attendance record of 49,710. The tournament opened with a rematch of the previous season's NCAA championship game – Kentucky versus Syracuse.

Soon enough, however, other schools and entities got into the business of November basketball tournaments.

The NCAA made changes to the exemption rule that put the Shootout on the path to extinction. It extended the exemption to events in the Lower 48 and the Bahamas. By the late 1990s, teams were choosing sunshine and beaches over the Shootout.

"The whole exempted legislation was changed and over time there became a proliferation of other events," McDiffett said. "That made it harder and harder to be able to attract the type of teams that in turn would attract national television which in turn would make (the tournament) something viable from a ticket-selling basis."

In 2008, ESPN ended a long relationship with the Shootout in order to stage its own tournament on the same dates. Sustaining the tournament since then has been a struggle, McDiffett said.

"The money in college basketball has changed dramatically," he said. "The price we used to pay for a marquee team, we pay three or four times as much (now) for somebody not at that level."

Forty years ago, $8,000 and three exempted games was enough to lure the Louisvilles and Indianas to Alaska.

Petro remembers how John Calipari was able to bring  UMass to the 1991 Shootout on a limited budget.

"We actually loaned him the ski team bus for transportation," he said.

Now, teams can command six figures to play in exempted tournament. And the Shootout can't match those prices.

Perhaps the biggest blow to the Shootout was the NCAA's decision to allow teams playing in exempt tournaments to play one or more of those tournament games on their home court, where they can collect a home gate. That's why you see first-round NIT games or Maui Classic games held at locations other than Madison Square Garden or Maui.

"Being able to play two or three home games before they go to the Garden, that impacted the Shootout," Petro said.

And so it is that the final Shootout has none of the big names or the buzz as the first Shootout. But as recent tournaments have demonstrated, mid-major Division I teams play high-quality basketball and can create as much drama and excitement as the marquee teams.

Certainly few in an Alaska Airlines Center crowd of 3,233 were disappointed by last year's championship game, when Iona beat Nevada 75-73 with a layup with five-tenths of a second left.

"It's been such a great ride," Olson said. "At least it's (ending in) a milestone year. Forty years. To have something that long is unbelievable. We're going to be celebrating our 25th (wedding) anniversary, and we think that's terrific. Forty years of a basketball tournament is really profound, actually."

An earlier version of this story misstated the amount of money paid to the men's teams in this year's Shootout.