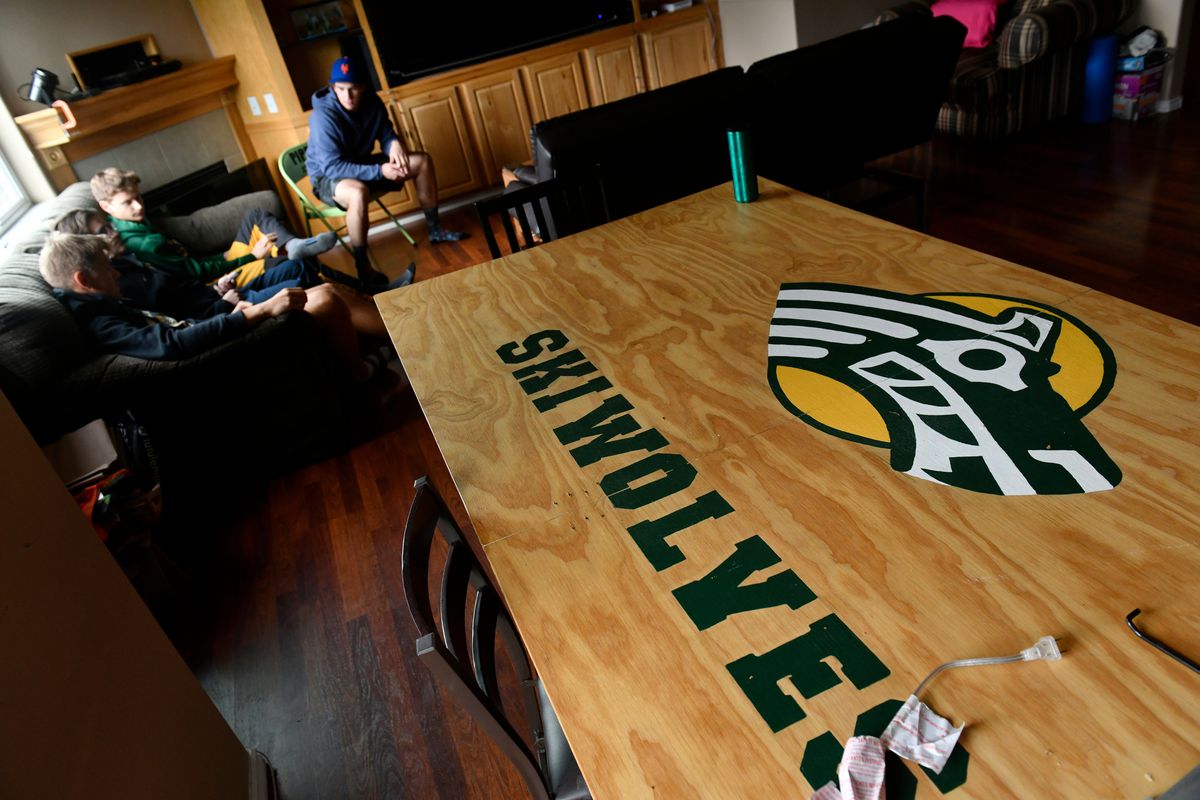 UAA skiers, from left, Sigurd Roenning, Michael Soetaert, Magnus Noroey and Moro Bamber listen in to a town hall meeting regarding proposed cuts to the athletic program, including their team, Wedneday at their apartment. (Marc Lester / ADN)

UAA skiers, from left, Sigurd Roenning, Michael Soetaert, Magnus Noroey and Moro Bamber listen in to a town hall meeting regarding proposed cuts to the athletic program, including their team, Wedneday at their apartment. (Marc Lester / ADN)

When UAA coach Marie Sophie Boggasch learned last week that university administrators intended to eliminate the gymnastics program, she frantically tried to reach all of her athletes so she could deliver the news personally. Four of them were boarding planes to come to Alaska when she reached them.

The same day, several new members of the UAA ski team arrived in Anchorage, where their initiation was a Zoom meeting during which coach Sparky Anderson told them the ski team was being cut.

That was last Wednesday. One week later, at a virtual town hall meeting with chancellor Cathy Sandeen and athletic director Greg Myford, athletes and others pleaded for more time to save their sports.

On Monday -- 12 days after the announcement of the cuts -- the University of Alaska Board of Regents will accept comments about UAA’s plan to ax four of its 13 intercollegiate athletic teams — men’s hockey, women’s gymnastics and men’s and women’s skiing. The regents will meet again on Sept. 10 -- less than month after the announcement -- to discuss and vote on the recommendation.

“Can you give us a dollar amount to shoot for?” she said. “Can you please at least give us three months to try to obtain that money for the next five years?”

Brian Kraft came from Illinois to play hockey for the Seawolves some 30 years ago and is still in Anchorage. He raised his kids and owns four businesses here, he said, and he urged UAA to slow down the process and explore all options.

“A pause is much needed,” he said, adding that cutting the four teams “is downright irresponsible.” He called it a slippery slope that could lead to the elimination of all UAA sports.

Kraft said he spoke to U.S. Sen. Dan Sullivan earlier in the day and was told that use of money from the CARES Act economic stimulus plan is discretionary. He said he hopes Sandeen and Myford have considered taking advantage of those funds, especially given the sports that are being targeted.

“You’re taking away two winter sports programs that the vast majority of youth in this community participate in,” Kraft said.

Many comments came from current and former athletes who spoke about the impact UAA athletics have had on their lives.

Winter Osborne, a junior from Fairbanks, said UAA gymnastics allows her to stay in Alaska while competing and earning a degree.

“Growing up as a young gymnast in Fairbanks I looked up to the UAA gymnasts and one day hoped I would be in their position. ... I was inspired by these girls and poured my heart into working hard to get a spot on the team.

“I want my place on the team to inspire young girls as UAA once inspired me.”

The booster club was formed in 1984 to support UAA and high school sports, Tonkins said, and uses some of the money it raises during Split the Pot raffles at UAA games helps fund other projects, like a vision screening program that provides screening for thousands of Anchorage School District students every year.

“The gymnastics team has been great in volunteering hundreds of hours to help us,” he said.

Sam Erickson, a 2018 graduate who was UAA’s student body president in 2016-17, acknowledged the statewide budget crisis faced by the University of Alaska, which made a pact with Gov. Mike Dunleavy to cut $70 million dollars over a three-year span. UAA’s share of the cuts is $27 million, a university spokesman said.

Sandeen said UAA will save $2.5 million by cutting hockey, skiing and gymnastics. But those savings come at a cost, Erickson said.

“You lose something that can’t be quantified,” he said. “When you cut a program like UAA skiing, where Olympic and World Cup athletes have come from, what it tells people from Anchorage and Alaska is they don’t have a home here anymore. They have to go somewhere else.”

Athletes are among the most engaged students at the university, he said — they’re the first to volunteer, and they’re classroom leaders.

“That’s what athletes have brought time and time again,” Erickson said. “Give them more time, and they will prove their worth.”

The Board of Regents will take public testimony on the sports cuts and any other university-relayed issues Monday from 4-6 p.m. The public can listen to the livestream at alaska.edu/bor/live and make comments by calling 1-866-831-8713.

An earlier version of this story incorrectly stated the date when the Board of Regents is expected to vote on the cuts.