His heart stopped beating and he wasn't breathing. But he got a second chance. 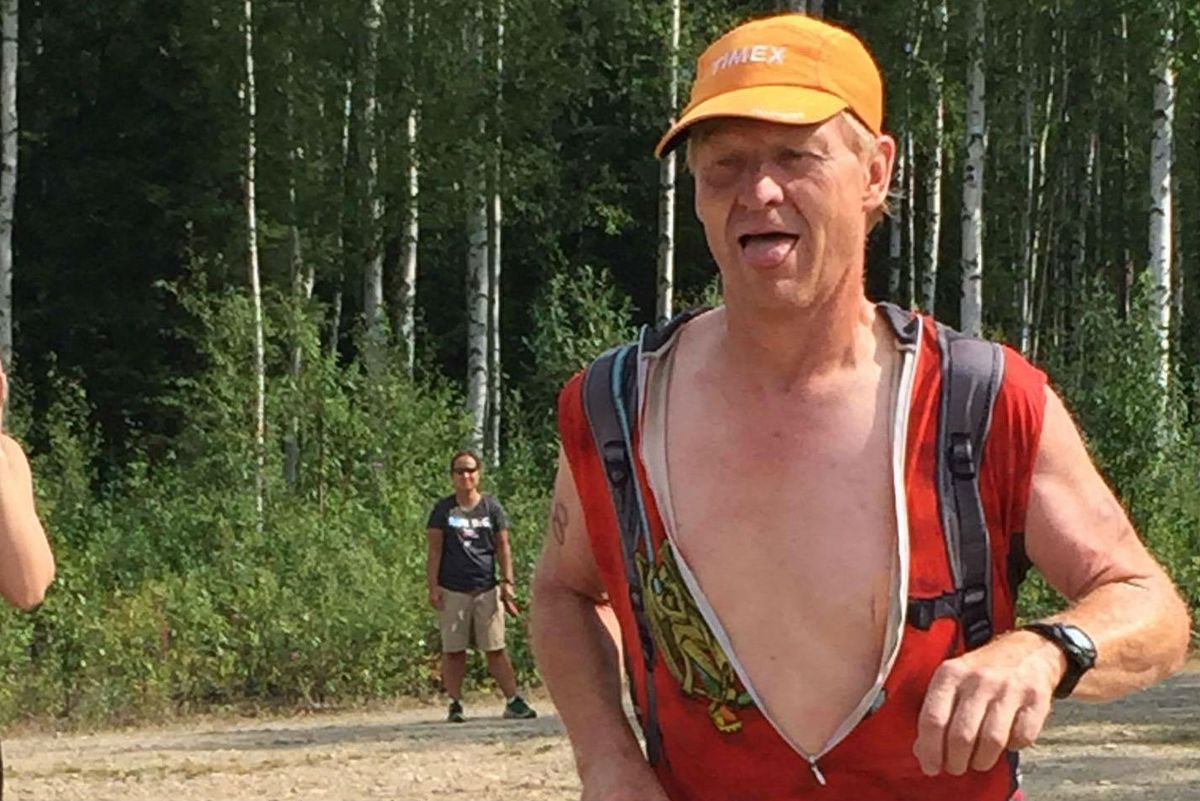 FAIRBANKS — Bob Baker, who has skied the Yukon Quest trail and the Iditarod Trail, and run the Equinox Marathon 37 times, is a hard man to stop.

Last Thursday, after a hard day of moving household goods by truck, he headed to the West Valley High School track for a one-mile race.

Baker is known to his friends as "Bad Bob," a nickname derived from an outlandish character in the Paul Newman movie, "The Life and Times of Judge Roy Bean."

Unlike the movie version of "Bad Bob," he is not an outlaw, a madman or an albino, but a 58-year-old endurance athlete who treats every day as a competitive event.

He hadn't been running a great deal in recent weeks because of some back pain, but he had his mind set on finishing the mile last week in less than six-and-a-half minutes, in part because a good friend had bet him that he wouldn't.

It was all the incentive Baker needed on a warm night with a temperature near 80. He finished the race in 6 minutes, 13 seconds, and was disturbed to discover later that the newspaper had him at 6 minutes, 15 seconds.

On the fourth lap, John Estle, who was timing the race, mentioned to someone next to him to "Watch Baker, he's going to put on a big sprint here." Baker did just that for the last 200 meters and crossed the finish line first, wearing his trademark orange, a color he is partial to because his first car was orange.

"I watched Bob finish his race. He really pushed at the end and beat someone he had been trailing the whole way," said Dr. Mishelle Nace, a pediatrician and runner who was there that night.

Not many seconds had passed before she heard someone yelling, "Call 911." That's when Nace saw Baker on the ground. Those who watched what unfolded that night said later that Nace and three other doctors at the track reacted as if they had been preparing for this all their lives.

She summoned Dr. Mark Kowal, a surgeon who was on the track preparing to run. Baker's heart had stopped.

"We felt for a pulse and could not find one," said Nace. "Mark did chest compressions and I did mouth-to-mouth and timing."

They did two rounds of 30 chest compressions and two breaths and checked again for a pulse. "We could not get a good pulse and Bob was not responsive," she said.

As that was happening, others set up the automated external defibrillator that the Running Club North had purchased about four years ago for just such emergencies.

With the pads placed on Baker's chest, the computerized AED announced at first that a shock would not be effective. The doctors continued CPR, a life-or-death technique that probably cracked five of Baker's ribs.

Dr. Jenny Lessner, a family practice physician, relieved Kowal and continued the compressions as they continued to try to revive Baker. Dr. Jeff Banks, a pediatrician, helped organize the response.

After two or three minutes of CPR, the computer recommended a shock. So the doctors stepped back and the machine zapped him. His arms and legs jumped.

"This time when we felt, he had a nice strong beautiful pulse," said Nace.

CPR kept blood flowing to his brain, but the AED was probably the key to his survival, the doctors said.

Baker woke up in the ambulance. He said he had been feeling light-headed as he crossed the finish line, went to get a drink and collapsed.

"The EMTs asked him if he knew his name and what had happened," said Gina Chythlook, one of Baker's daughters. He said he thought he had fainted and this ambulance ride was just a precaution.

"No, Mr. Baker, you didn't just faint," the EMT said. "Your heart stopped. You're what we call a second chance."

It may sound strange, but Baker got his second chance because he was fortunate enough to have his heart stop at the right place, the right time and in the midst of levelheaded people who had an AED close by.

Had this occurred almost anywhere else, except perhaps in a hospital emergency room, there likely would be no second chance.

On the same track where Baker fell, a student from Monroe High School died during a high school meet in May. While these incidents are unrelated, I hope that the death of the student and the survival of Baker will lead us to think seriously about how to better prepare to deal with future emergencies.

In talking to the doctors who saved Baker's life, they all said they hope that what comes out of this is an awareness that the emergency care they provided could have been offered by anyone that night with basic CPR training.

Nace said that when she thought afterward how they could have improved the response, she said, "Why aren't we teaching this to more people in the community?"

Baker's experience can be of value to all of us if we take the time to extract the proper lessons. This is a powerful story, and he will be able to share it with others when he is fully recovered.

He has long been an asset to sports groups in Fairbanks and a tireless worker who would be called "Good Bob," except that is a lousy nickname.

Baker underwent successful heart bypass surgery in Anchorage on Sunday, and those who know him believe that he will have to conquer his competitive instincts and the desire to go all-out at all times or risk his recovery. It will be many months, not weeks. This is no time to race the clock.

In a 2011 interview, he spoke about his goals as a runner and skier, with a statement that I understand, though some readers will disagree.

"I'm always competitive, would love to race rather than train any day," Baker said. "My goal is to be as fit as I can be for as long as I can – until death. Hope to die during a race, preferably, a ski race."

But not just yet.

Columnist Dermot Cole lives in Fairbanks The views expressed here are the writer's own and are not necessarily endorsed by Alaska Dispatch News, which welcomes a broad range of viewpoints. To submit a piece for consideration, email commentary(at)alaskadispatch.com.