Thousands of Alaska walruses have hauled out in a surprising spot. What now? 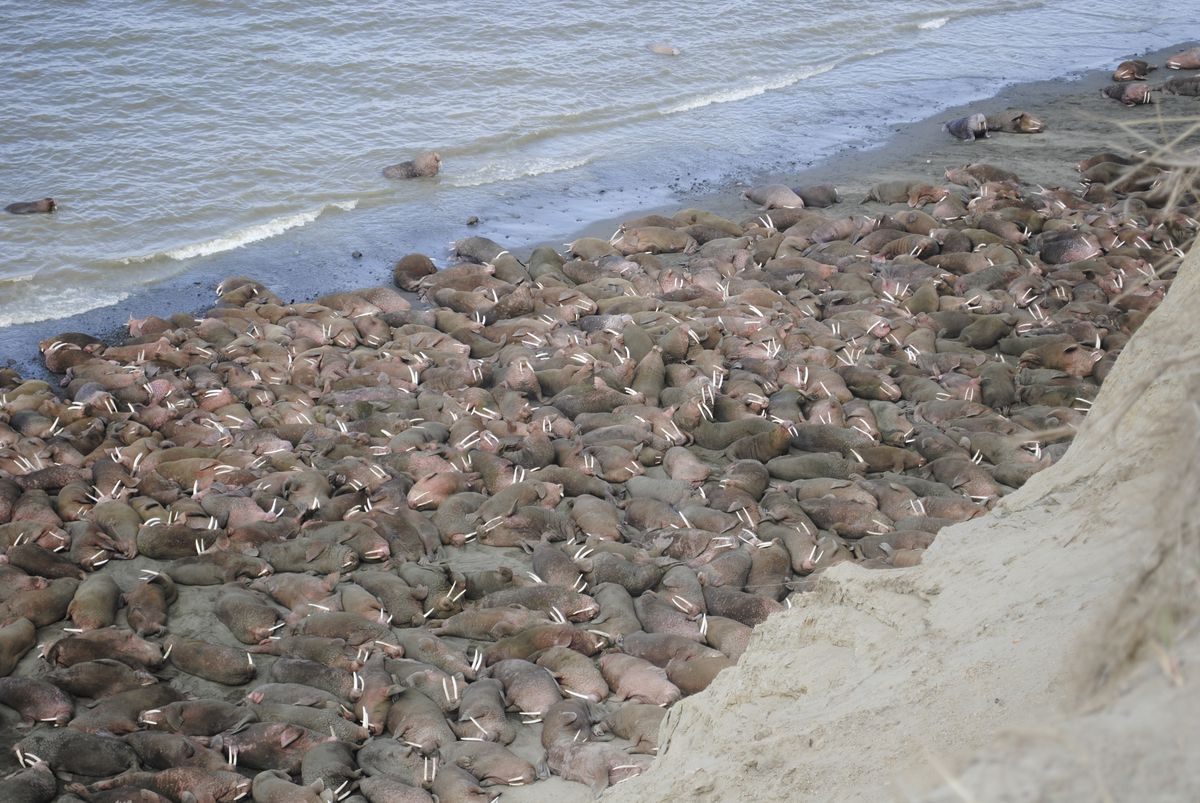 Masses of walruses are seen on April 21, 2016, at Cape Greig on the Alaska Peninsula, site of a new haulout not seen before this year.

Masses of walruses are seen on April 21, 2016, at Cape Greig on the Alaska Peninsula, site of a new haulout not seen before this year.

Unexpectedly, the walruses showed up. Thousands of them hauled out this spring on a sandy Bristol Bay beach where no one remembers seeing them before. It's a setting for conflict between protection for the walruses and commercial fishing, brown bear hunts and air travel.

They are big bulls mainly, the mass of them around Cape Greig on the Alaska Peninsula, about 10 miles north of the small fishing village of Pilot Point. A biologist first spotted about 120 on the beach on March 4. The number went up and down over the next couple of months, but mainly up. As of April 21, there were an estimated 1,500 and as of May 3, more than 3,000, according to the U.S. Geological Survey.

"It's a new one," Jim MacCracken, an Anchorage-based supervisory biologist with the U.S. Fish and Wildlife Service, said of the haulout. "We've never seen walruses there before or had any reports of walruses hauling out there before."

Photos show thousands packed together onshore and others in the water. It's a canvas of wrinkly brown and pink bodies, of long white tusks catching a glint of sun.

Wildlife managers are intent on protecting them, both from ivory poachers and also from anything that might spook them into a deadly stampede. The buzz of low-flying small planes, the whir of fishing boats in the water, the crack of a rifle – any of those could jolt the lumbering animals.

On a regular lazy day, walruses lie close together, heads resting on each other's backs, climbing over one another to move. They gaze about and grunt in seeming annoyance at their neighbors. But things can turn dangerous fast.

"If there's a bunch of them onshore like that and they get disturbed by a bear or an airplane flying over or something and they all run back into the water, the younger animals can get injured or crushed," MacCracken said.

"There are a lot of us scurrying around now trying to think of the best ways to be prepared for the fact that as we move into the summer months, there are going to be a lot more people out there and these guys are in a pretty — for this part of the world — a pretty well-trafficked area," Alexander said.

People who disturb walruses can be charged with criminal misdemeanors for violating the federal Marine Mammal Protection Act. Alaskans also have been charged under state law for getting too close to the famed Round Island sanctuary walruses, around 100 miles northwest of Cape Greig, and causing stampedes.

At one point, the Cape Greig beach appeared to have emptied out. Anxious wildlife managers thought the potential there for collision between wildlife and humans might have passed. But the animals may just been on a food run, using their sensitive whiskers to feel for clams, snails, worms and the like on the seafloor, said MacCracken, head of Fish and Wildlife Service walrus and sea otter programs. They don't eat salmon. But then the beach was again covered with the big mammals -- average weight for adult males, 2,700 pounds -- a few days ago, he said.

Jon King, who owns Naknek-based King Air, said he had reports of them from family and flew by with his wife on April 21 to take a look. He landed and walked slowly toward some, getting within about 800 feet. One lifted up his head but most didn't notice anything, King said.

"The walruses seemed pretty happy. They don't run and they don't get too nervous," he said. But the proximity of walruses may be tempting to people to get too close, he said.

Spring brown bear hunting season opens May 10, and brings with it an uptick of air traffic from guide operators who go back and forth, Alexander said. Guide Gary LaRose said he leads hunts in a nearby area south of Ugashik Bay. Pilots usually fly along the beach there. When there's a low cloud ceiling, which is common, that's the safest route, he said.

But "as a guide with (federal) permits, I am staying away," LaRose said in an email. "Too much on the line for a look at walruses."

A walrus that dies on the beach may draw bears but grizzly hunters shouldn't set up anywhere around the haulout, state biologists said.

The beach also is near a section of Bristol Bay where commercial fishermen concentrate during the summer sockeye salmon runs. It's about a quarter-mile from the northern boundary of the Ugashik management district, and when the salmon ebb to the south, the fishing boats do too, said Daniel Kingsley, who fishes out of Pilot Point, where he used to live. He also works as a consultant for the Pilot Point tribe.

"There's going to be a whole line of boats pretty close to them, fishing. I haven't thought about that. How close can we get?" Kingsley said.

That will be assessed along with the walrus count over the next few weeks, said Bert Lewis, Bristol Bay commercial fisheries management coordinator for the Alaska Department of Fish and Game.

"The numbers of animals there have varied from 2,000 when they were first sighted to zero to 300," Lewis said. "They are kinda ephemeral at this point."

The May 3 count, by USGS's Fischbach, topped 3,000, with more in the water. He used a counting tool on photo software to assess stitched-together photos.

It's not that walruses are new to the Bristol Bay region. On the north end of the bay not far from Togiak, there's the Walrus Islands State Game Sanctuary with a haulout on Round Island that can number a few thousand walruses, some of which are now webcam stars. Just west is Hagemeister Island, which over the last five to 10 years has become another walrus magnet. There are haulouts on Cape Newenham and Cape Peirce in the Togiak National Wildlife Refuge. On the eastern side of the bay near Cape Greig, there's an existing haulout at Cape Seniavin.

A few Bristol Bay fishermen start prospecting for sockeyes in early June, though the first big pulse of salmon won't move in until June 20 or so, Lewis said.

When the salmon hit Bristol Bay – the world's most productive wild sockeye fishery -- up to 300 boats may be targeting them, plus tenders and other support vessels, Lewis said.

"This is just a new situation and we'll respond according to what the situation is in coordination with the industry, the fishing fleet and the U.S. Fish and Wildlife Service," Lewis said.

If the walruses are still there, fishing boundaries may need adjustment, said Kinglsey, the fisherman.

Around other walrus haulouts, boats typically are banned for 1 mile and air traffic is limited, Lewis said. And the Round Island sanctuary has an even bigger zone. Boats cannot come within 3 miles except with a permit and planes are supposed to stay 5,000 feet away. Round Island's rocky cliffs echo noise more than would flatter, sandier beaches, said Joe Meehan, Fish and Game's lands and refuges coordinator. At Cape Greig, the bluff appears to be layers of marine sediment, with some rock.

The Federal Aviation Administration already has issued guidance to pilots noting the new Cape Greig haulout and urging them to stay at least 2,000 feet above the area and a half-mile away.

A federal team plans to install cameras as soon as this weekend at Cape Greig that law enforcement will use to investigate stampedes, poachings or die-offs, said Ryan Noel, special agent in charge for the Fish and Wildlife Service in Alaska.

"We want to prevent that. We don't want there to be any dead walruses and we don't anyone to get in trouble," Noel said.

Walrus breeding in the Being Sea happens during the winter on sea ice. The animals' scientific name, Odobenus rosmarus, is Latin for "tooth-walking sea-horse," because they use their tusks to pull up onto the ice, according to National Geographic. The females stay on ice floes to give birth; biologists say that may be safer than shore for the vulnerable young, which are targeted by polar bears. The males peel off for coastal haulouts in Russia and Bristol Bay to rest and forage.

Those females and their calves have had to establish their own haulouts too. They used to spend summers mainly on ice. But with rapid melting in recent years, the Chukchi Sea ice edge has retreated so much that it ends up over water too deep for walruses to dive for food. Most years since 2007, tens of thousands of females and calves have hauled out on a barrier island near Point Lay on Alaska's north coast as well as other northern spots. The massive numbers attracted international attention, but Point Lay and federal agencies have asked the media to stay away.

Biologists don't have a good count overall of Pacific walruses though studies are underway. The Fish and Wildlife Service proposed in 2011 to list the animal as threatened or endangered, in part because of diminished sea ice. It intends to announce a decision by next year, MacCracken said.

It's not clear why the bulls are hauling out at Cape Greig. Kingsley said it's all new to the village of Pilot Point, home to fewer than 75 people, most of them connected to fishing.

"I hope these walruses like brown bears and wolverines," Kingsley said. "Cape Greig has plenty."

Before now, walruses were a rare sight. Sometimes dead ones were found on beaches, Kingsley said, and their ivory was harvested.

No one in the village is a walrus hunter, he said. He doesn't expect anyone to start now.