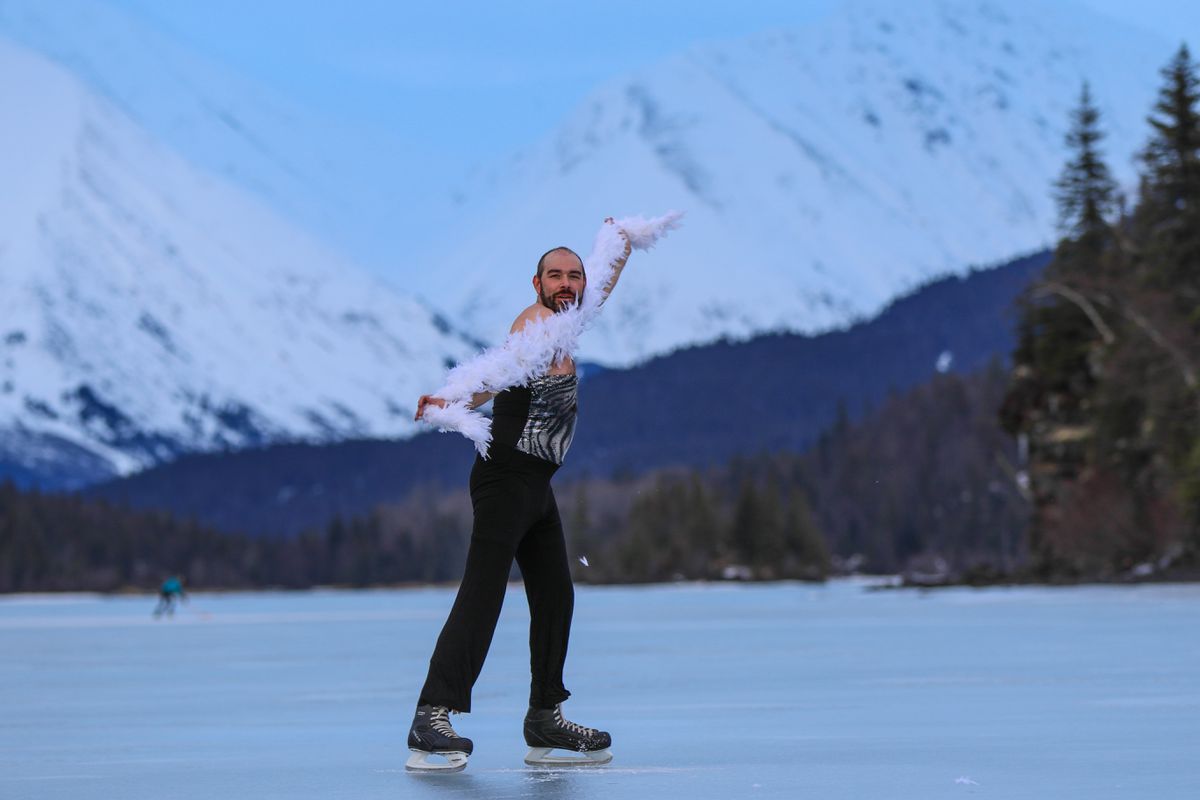 There's plenty of that quintessential Alaska scenery in the backgrounds of her photos too, but James' goal is to show off the humorous and sensitive sides (and sometimes the backsides) of guys in the Last Frontier. Men of all shapes and sizes are featured in her Mountain Men of Alaska calendar, which is now in its second year.

James, 31, said she wanted to highlight "all different types of men that live up here and all different interests that they have."

The front of the 2017 calendar features Dave Maternowski (Mr. February) sitting on a horse and looking over his shoulder with mountains and water in the background. He has long blond hair, an Alaska flag draped over his shoulders and no pants. To the right of him the text reads: "The odds are good, but the goods are odd."

The rest of the 2017 calendar images are in that same spirit — a lighthearted departure from the calendars full of scantily clad people posing seductively. Some images are more on the risque side — Mr. April and Mr. November bare their bums for the camera — but others are downright goofy. And all the photos are at least a little silly.

[How to get that winter body in time for parka season]

In one photo, former Republican state Senate candidate Jeff Landfield (Mr. August) frolics across a beach wearing a brightly colored swimsuit, floaties on his arms, an inner tube around his waist and holding a towel that billows behind him.

Ryan Burnard (Mr. January) poses on ice in a tight figure skating outfit with a white feather boa. A note with the photograph reads: "When Ryan's not practicing his triple lutzes and salchows on local frozen lakes, he's a jack-of-all trades and loving father to a daughter who will forever live with the repercussions of his photo shoot."

James — who lives in Seward and has traveled as far as Eureka to take photos for her calendar — has also orchestrated photo shoots with some of the state's more prominent male athletes thanks to the project.

She got 2016 Mount Marathon winner David Norris on board. And 2015 Yukon Quest Champion Brent Sass — the model she made the long drive to Eureka in the Interior for — is a cutout in the back of the 2017 calendar. Wearing sunglasses and a big smile, but no shirt, the musher holds three fluffy puppies. Another three pups pile on his lap.

Sass, 36, said he initially wasn't sure he wanted to be photographed for a calendar. But James sold him on it "mainly just because of the characters and the variety and the uniqueness" he said. He likes that the calendar is fun.

"She goes for real Alaskan guys, a variety, from bush pilots to dog mushers to hunters to guys that are fishermen to guys that are just living in Alaska," said Sass, who is planning to race the Iditarod and Yukon Quest this year.

Sass says he thinks the calendars are a hit because of their "rawness" and because they're made up of "hilarious photos of guys."

"That's the best thing about anything in life — is if you don't take it too seriously, I think most people enjoy it a lot more," Sass said.

James estimates she sold roughly 2,000 2016 calendars and is aiming to hit the 5,000 mark with the 2017 edition through selling them online and at shops in Alaska. Her Mountain Men of Alaska Facebook page and Instagram account have helped her amass a following as well.

One fan sticks out for James. Earlier this year, a woman contacted James over Facebook to say that the calendar she purchased for her 76-year-old mom in Houston, Texas, was among the items saved when her mom's home flooded.

"I was like, wow, that makes me feel good," James said. "But also at the same time, like, save something important."

James — whose day job is a special education aide at a middle school and also has a rafting business called Kenai Riverdog — doesn't consider herself a professional photographer. But she says she does have a creative streak.

"Each photo shoot that I go into, I really try to just have a small idea of what I want to do and I talk to the model and we just get creative together," James said. "It's kind of a team effort to make the photos happen."

There's no shortage of potential calendar candidates, she said. James has already started collecting images for the 2018 edition that she wants to have out in time for next year's batch of tourists.

Her subjects have gone to great lengths for the perfect shot, too, James says. One of her models had an allergic reaction to mosquito bites while standing in a swampy area with fireweed. Another man sat in a tub with ice-cold spring water on and off for close to an hour and "didn't complain even once," James said.

Not everyone makes the cut for the calendar, but James will occasionally receive a photo submission of an Alaska guy that's in the same spirit and share the image on the Mountain Men Facebook page.

"I don't post everything that people send me mainly because I want to maintain my originality and keep going with my ideas," she said. "I don't want to feel like I'm stealing anyone else's ideas."

One man dubbed "Naked J" made the cut for the Facebook page, though. He sent James photos of himself lounging on a dirt bike wearing only shoes and a helmet, his face either turned away from the camera or obscured by his helmet visor.

Even James didn't know what Naked J looked like for a while. Then one day, she was walking out of Chinooks Bar and Grill in Seward and a man she didn't recognize called her by name.

James responded politely, thinking maybe she'd met him before and had forgotten.

So far James has only had one model in the calendar more than once. Ian Ryerson is Mr. December for 2016 and 2017.

"I wasn't really going to put people in (the calendar) more than one time, but when he contacted me this past December, he said he was starting his treatments for his cancer that he had," James said. "And so I was like … 'Let's get you in that calendar again.' "

Ryerson was a gardener who flew planes, "had a fantastic beard," was soft-spoken, smart and tough. He died of cancer earlier this year, James said.

His nearly elbow-length beard and lap dog named Big Carl are the focal points of the 2017 photo. Lights on a decorated Christmas tree shine in the background.

"His life was as full as his beard was long," reads the text next to his photo.