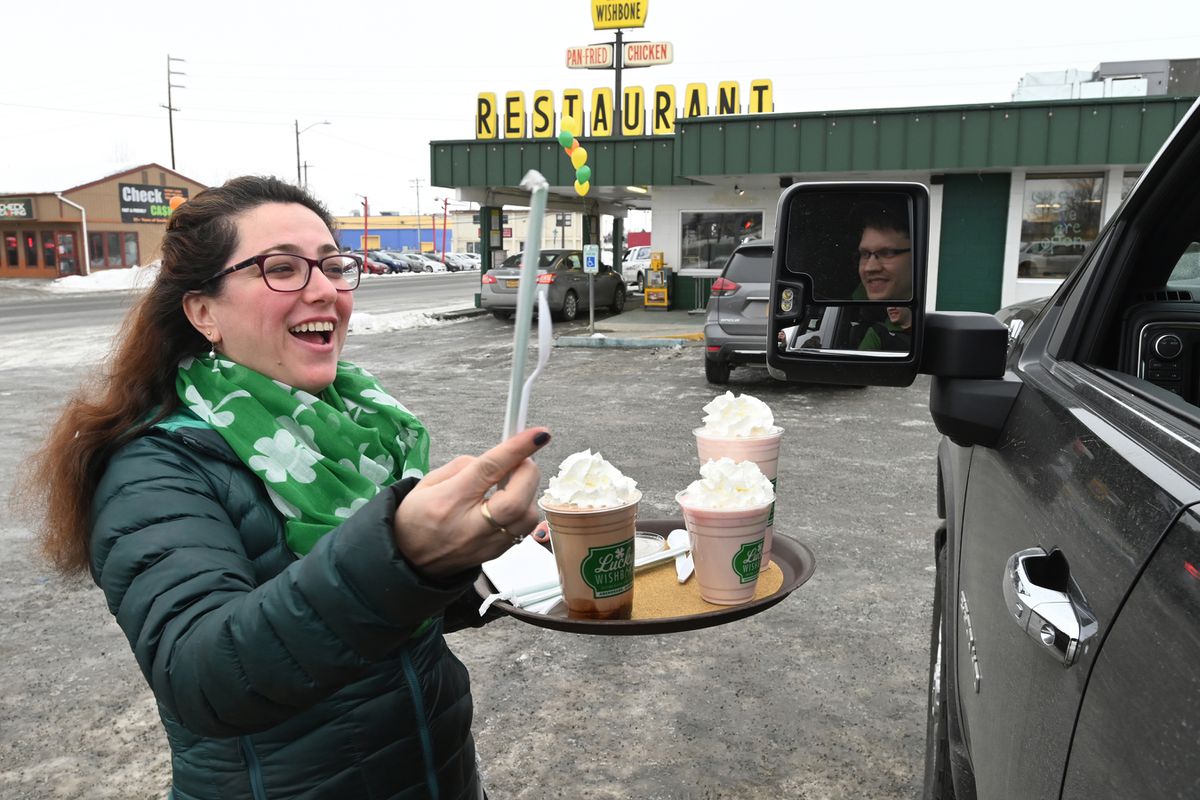 From Spenard to the south side, Anchorage restaurants scrambled this week to adjust after the biggest shake-up to their industry since the 1964 Good Friday earthquake.

At Leroy’s in Midtown, the all-night diner was transforming into a takeout joint. At Barbie’s on Lake Otis, they were running a skeleton crew. Mexico Lindo in Spenard still smelled of fresh-baked conchas and puerquitos, but the carne asada tacos were on hold. And at the Lucky Wishbone in Fairview, one of the city’s oldest extended families was holding itself together with fried chicken, milkshakes and a side of hope.

“It’s eerie and it’s weird,” said Lucky Wishbone waitress-turned-carhop Viviana Mojarro as she hurried between the landmark restaurant and its icy parking lot, where customers were placing orders from their vehicles the day after a citywide ban on dining inside bars and restaurants took effect. “We’re just trying to figure out what to do.”

Mojarro said the restaurant was taking orders curbside, to-go, by phone, at its drive-thru and through apps like Doordash and GrubHub since the order by Mayor Ethan Berkowitz went into effect at 5 p.m. Monday. The order — which also applies to entertainment establishments but not grocery stores — was later expanded by another from the state banning in-restaurant dining at all restaurants statewide.

“We’re going to try this carhop thing for a couple days and see how it works out. If it’s working then we’ll keep doing it and hope for the best,” she said. “That’s all anyone can do.”

A lifelong Alaskan, Mojarro said she thinks the disruption is the biggest disaster to hit Alaska since the Good Friday quake, which killed more than 100 people, left parts of Anchorage in ruins and devastated coastal communities such as Valdez, Chenega and Seward.

“The 1964 earthquake, that’s really the last thing that rocked Alaska like this,” she said.

The night before, restaurant co-owner Carolina Stacey fought back tears as she told staff the normally buzzing dining room at “The 'Bone” would be empty until further notice. She also told them she’d have to cut shifts indefinitely as the city tries to isolate residents from the spreading coronavirus pandemic.

Stacey said it was one of the most difficult conversations of her life.

"I’ve been working with these people for years and they’ve worked for me for so long,” said the former waitress, who now runs the restaurant with partners Heidi Heinrich and Pat Brown — daughter of original owners George and Peggy Brown. “I know about their families, I know about their children, I know their individual situation. The Lucky Wishbone is a family regardless, so it’s really hard when you’re trying to figure out what to do with your family.”

She understands the need for caution but worries about the long-term effects.

“I don’t know how else to curb this epidemic. It’s a very difficult situation,” she said. “But you also have to think of the economic impact of this and what it will cost. The state is already in trouble when it comes to the budget. As a restaurant, we are looking at what is this summer going to be for us.”

Stacey said her biggest fear is the uncertainty the new regulations have brought to her world.

“We’re a small business -- we’re not a corporation that has millions of dollars to back us up,” she said. “In a way we’re still a small mom-and-pop restaurant. I have about 56 employees and they all depend on their income.”

“It’s going to hurt us,” said Guzman, who had to send his cook home because the store was temporarily out of rice and beans. “I believe every restaurant is going to feel the impact of the coronavirus.”

Not everything has changed. Guzman still has plenty of specialty Mexican spices, frozen tamales and pinatas, and the smell of fresh-baked Mexican pastries still welcomes customers as they enter. But the new normal of life in the age of coronavirus is very much starting to set in.

“I was talking with my family down in Guatemala. They live in the country, far away from the city. But down there it’s the same thing: All of the stores are sold out and everybody’s hiding.”

Guzman said he understands the reason for the new guidelines, which were put in place to prevent people from gathering together and allow for only takeout and delivery orders.

Since the pandemic began, Guzman said, he’s been cleaning and disinfecting surfaces constantly. He thinks it’s important for people to listen to health officials and government leaders who are urging people to take the outbreak seriously.

“The most important thing is to tell the truth. That is what is happening. It’s not a joke, it’s real and it’s happening.”

Some businesses are better equipped to handle the disruption than others. Several fast-food drive-thru window workers reported strong sales, while dine-in joints were deserted. At Barbie’s Cafe in South Anchorage, the restaurant’s two remaining employees sat at a table playing dominoes beneath a television tuned to ESPN.

One of the men — whose mom, Barbie Williams, has owned the restaurant for a decade — said they’d taken in less than $100 since opening at 5 a.m.

Across the table, cook Reggie Evans said the new rules were devastating for the cafe, which relies on longtime regulars who often spend hours sitting in the dining room. There’s a crew of cops who come in at dawn and another group of auto detailers who stop by for lunch.

“One guy comes in just to drink coffee and read the paper,” Evans said.

At Leroy’s, one of a handful of 24-hour diners in the city, owner Young Kim said she cut her staff by more than half after the announcement. Business was slow Tuesday at the normally busy restaurant on C Street despite Kim’s efforts to promote call-in orders and her decision to start delivering orders personally.

“We’re not used to being a pickup restaurant, just open dining,” she said.

Kim said she’s not sure how long her restaurant can stay in business under the new rules.

Cook Felipe Robles said he and his fellow employees are willing to do whatever it takes to keep the restaurant open.

“They can’t afford to pay us, but we’ve gotta work together,” he said. “This is our life.”

The changes are causing disruptions in countless ways. Delivery apps like Doordash and GrubHub are still running strong, but with school closed some drivers were scrambling Tuesday, including Johnise Morning, a Doordasher who brought her adolescent son along for the ride during a pickup at Lucky Wishbone.

“This is a different thing,” said Morning, who spoke as she walked swiftly to her car. Having her son along, she said, wasn’t too bad — except for the growing boy’s constant requests for grub.

“He wants everything in every restaurant.”

Most restaurant workers said uncertainty is the biggest issue facing them right now. Most live paycheck to paycheck and have families to support. Off the top of her head, Lucky Wishbone owner Stacy counted to herself the number of employees who have children at home who are 10 or younger.

The Alaska Cabaret, Hotel, Restaurant and Retailers Association is trying to encourage people to help out by patronizing their favorite restaurants during the emergency.

“At this time, we highly encourage restaurants to provide takeout, curbside pickup, drive-thru and delivery if possible, and we urge the public to remember your local eating and drinking places – buy takeout or delivery, and purchase gift cards now to be used after this has passed,” the association wrote.

Not everyone agrees with the decision to close restaurants. Lucky Wishbone regular Tom Sheffrey, who services restaurant equipment, called the decision “absolute stupidity.”

“It’s going to cause such a heartache to the waiters, the servers, even the cooks,” he said. “A lot of restaurants that were borderline just won’t make it.”

A lot of people might not either without steady income. Waitress Katrina Jones said she and her 9-year-old daughter would be out on the street if she lost her job at the restaurant.

Stacey said she and her partners will do everything they can to make sure that doesn’t happen, whether it means feeding employees, rearranging hours or simply offering a sympathetic ear.

“People are afraid,” said Stacey, who added she’s trying to keep calm amid the growing storm. “I can freak out and worry or I can do my best.”

‘We’re going to fight together’

Despite the disruption, there were moments of hope as restaurants struggled Tuesday to find a way forward. At Mexico Lindo, David Guzman said there’s no plans to turn off the ovens.

At Barbie’s Cafe, the two remaining employees said they’ll keep working for Barbie even if she can’t pay them.

At the Lucky Wishbone, customers smiled and laughed as they pulled up outside and waited on burgers and shakes to be hand-delivered.

As he prepared to dive into a jumbo cheeseburger, customer Casey Spaulding said perhaps the carhop thing will catch on.

“Maybe it’s going to be the new old normal.”

At Leroy’s, Young Kim said she has no plans to cut hours and hopes customers will continue to support her business.

She’s staying optimistic, Kim said as she stood inside the empty restaurant, where the daily special Tuesday was corned beef and cabbage. Nearby, a handwritten sign held a St. Patrick’s Day message for any customers who did drop by. The sign featured a rainbow, a bright-yellow sun and a shamrock. It read:

And your blessings outnumber the shamrocks that grow.