Anchorage’s Park Strip: It’s true that it’s been a golf course and an airfield, but that’s just the start 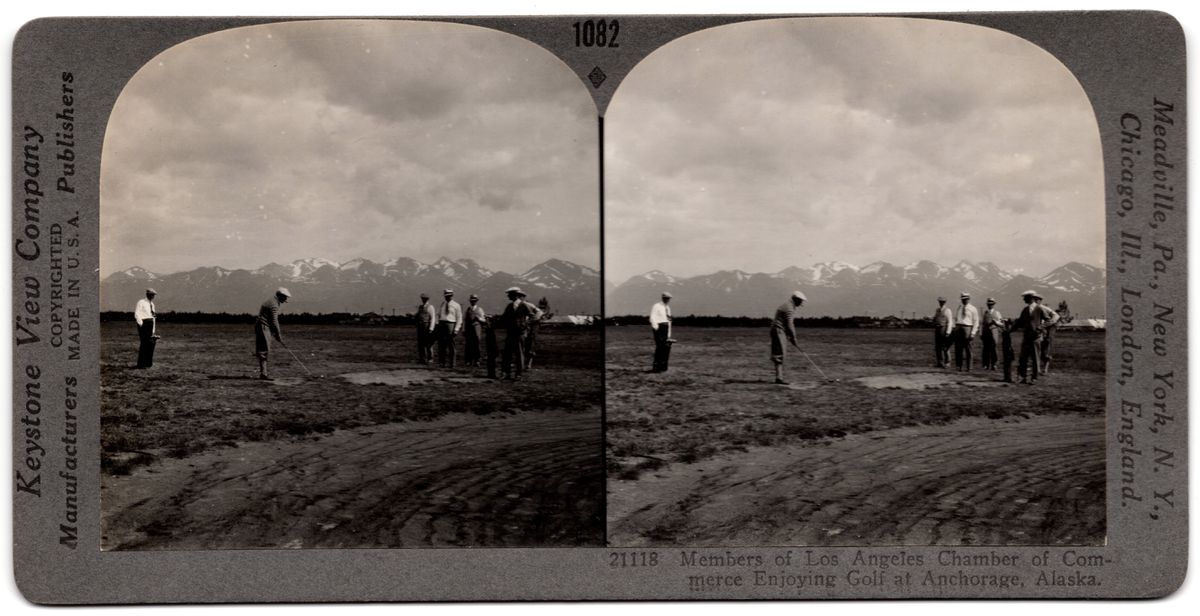 Circa 1930s Keystone View Company, stereoview card #1082, “A Game of Golf at Anchorage, Alaska.” (From the collection of David Reamer)

Circa 1930s Keystone View Company, stereoview card #1082, “A Game of Golf at Anchorage, Alaska.” (From the collection of David Reamer)

Delaney Park, what most locals call the Park Strip, is an Anchorage fixture. And like so many longtime Anchorage fixtures, its history is inextricably linked to fire, prostitution, politics, aviation and outdoor recreation.

The earliest designs for Anchorage included the designation of what is now the Park Strip as a firebreak and park, which could separate the original townsite from the wilderness and prostitutes to the immediate south.

The area was first cleared as a firebreak in 1917, a wise recognition of Anchorage’s susceptibility to fire. There have been many fire tragedies in Anchorage history, like the Lane Hotel in 1966 and the Royal Suite Apartments in 2017. But there has never been anything like a citywide fire.

On July 27, 1922, the Park Strip land was conveyed to the City of Anchorage, “for fire protection and park purposes, and to furnish a suitable field for aeroplanes.” On March 25, 1923, the Anchorage community pitched in together to further clean the space for its conversion into the city’s first golf course and airfield. Mayor Michael Conroy declared a half-day holiday. Barbecue was provided, and the use of two tractors was donated. According to local legend, several caches of hidden liquor were discovered, resulting in severely impaired volunteers despite the ongoing Prohibition.

Yes, the Park Strip was both a golf course and airfield, and many residents celebrated the addition of the former more than the latter. The Anchorage Daily Times staff noted their excitement for the nine-hole golf course, “not that we can play golf, but we like to hear beginners swear.”

The grass was rough and patchy. Balls sometimes bounced off planes and homes. Still, in its time, the city golf course was the northernmost course in America. It was a transplant of Lower 48 culture into Alaska that made Anchorage distinct in its ongoing rivalries with other Alaska towns. During World War II, the Army barricaded the Park Strip, fearing enemy landings. The golf course never reopened, though the park was still called the city golf course for many years.

Like the golf course, the airfield answered local needs but was woefully inadequate. The 1,380-foot runway was barely long enough for fully loaded planes. Nearby power lines were a menace, and strong north winds could make takeoffs impossible. As there was little room for expansion, the Anchorage City Council approved plans for what would become Merrill Field on June 5, 1929. Planes continued to occasionally use the Park Strip through 1939, usually to ferry patients closer to the old Providence Hospital.

In addition, the Park Strip in those days also featured Anchorage’s red-light district. At the strip’s eastern end was a line of brothels that roughly stretched along C Street between Seventh and 10th Avenues. At one end was a sign labeled “First Chance.” At the other end was a sign labeled “Last Chance.” This red-light district was cleared under federal pressure circa 1930 but allowed to eventually re-coalesce elsewhere, as was the pattern in early Anchorage.

One of the Park Strip’s defining attributes is its frequent use. Thus, the grass is often trampled, dying or dead, a tradeoff for the park’s location and utility. In earlier Anchorage, residents were both more and less careful of the Park Strip. On the one hand, residents were outraged when the Anchorage City Council approved a circus for the park in April 1955. Residents protested that the event would leave the park in “an unsightly condition” and cause “excessive noise and dust.” The council rescinded its approval under pressure. On the other hand, there were several public requests during the 1940s and ’50s for Anchoragites to quit driving across the park, leaving muddy ruts in their wake.

For much of its history, the park only had informal names: the firebreak, city golf course, Ninth Avenue park, or Park Strip. Attempts to name the park after artist Sydney Laurence and Judge Anthony Dimond failed. Finally, on September 14, 1971, the Anchorage City Council renamed it as the James J. Delaney Park. “J. J.” Delaney (1896-1970) was a longtime Alaska Railroad employee and three-term mayor of Anchorage from 1929 to 1932.

Delaney’s mayoral tenure included the construction of Merrill Field and the first Anchorage High School. Coincidentally, he also ordered the clearing of the brothels along the Park Strip, a move he considered his “biggest mistake.” Said Delaney to the Times in 1965, “The girls moved out of the Red Light District, but they scattered around town. Trouble was more common after that.”

Over its many decades, the Park Strip has been home to many activities, from Vietnam War protests to yoga classes. The two most famous events are the 1958 statehood bonfire and Pope John Paul II’s 1981 visit. After the U.S. House of Representatives and Senate approved Alaska statehood in the summer of 1958, residents celebrated with the largest bonfire in Alaska history, centered in the park around H Street. On June 30, 1958, 50 tons of wood were burnt—49 tons for the eventual 49th state with an extra ton for Hawaii. Estimates ranged from 11,000 to 25,000 attendees.

The bonfire crowd was dwarfed by the estimated 80-100 thousand that attended a mass performed by Pope John Paul II from a temporary altar between L and M Streets on February 26, 1981. For the use of the park, the Anchorage diocese applied for and was granted three permits. City Manager Larry Crawford also signed a letter acknowledging the Pope’s use of wine during the mass to clear any concerns about alcohol on city property. “Any other head of state would be treated the same,” said one city employee to the Times. “The permits are just part of the routine.”