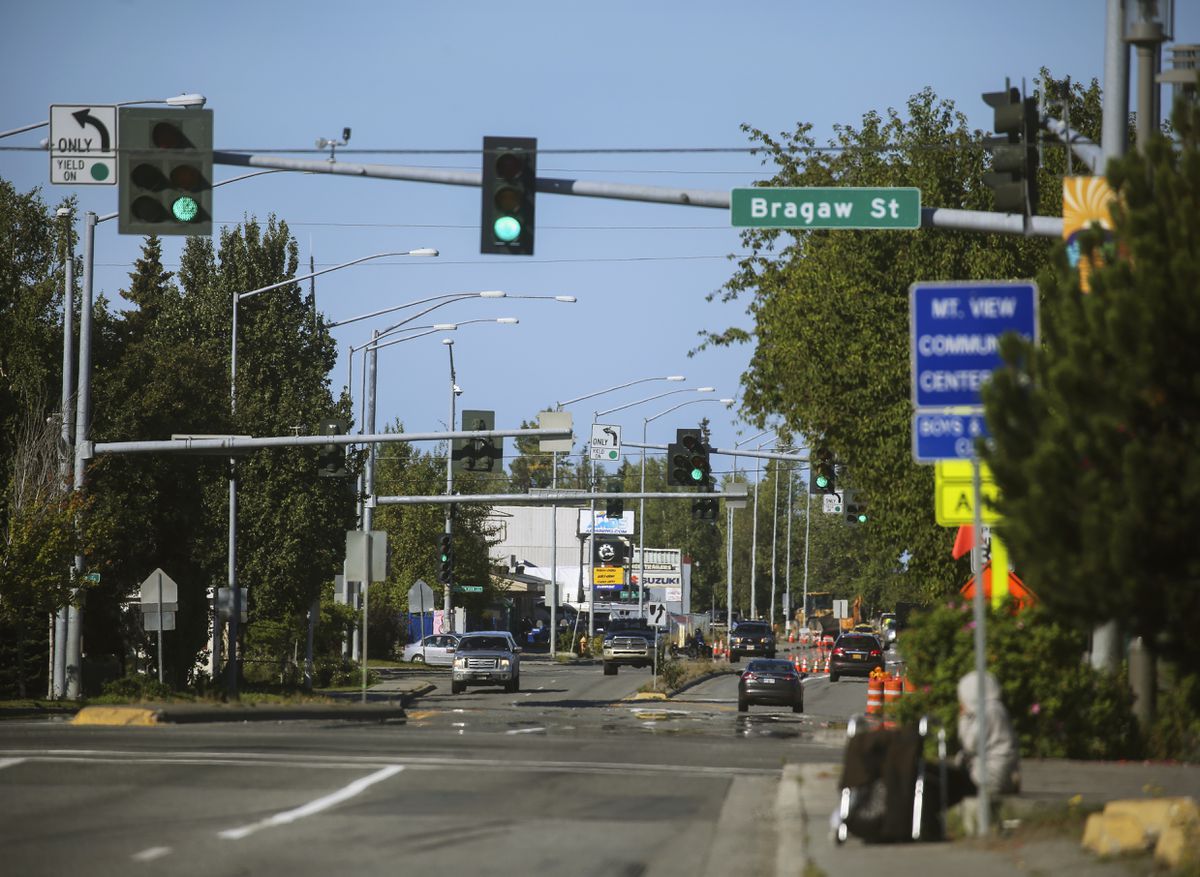 Anchorage neighborhood name origins vary widely. Among the city’s older neighborhoods, those closer to the downtown core and original townsite, some community names are more literally descriptive. South Addition was a southern addition to the town. Airport Heights abutted Merrill Field. For decades, developers across the country have added “Heights” to community names, thinking it evokes an air of distinction, even exclusivity.

Other, older neighborhood names have a bit of history to them, albeit a typically illicit history. Spenard is named for Joe Spenard, a bootlegger, squatter and man generally dismissive of legal limitations. Bootleggers Cove is named for the bootleggers who landed their goods south of the city during Prohibition. And Russian Jack is named for a Russian immigrant convicted of bootlegging and murder in Anchorage.

Mountain View is a generic name for any Anchorage community, but the neighborhood deserves some callout for its role in local history — the first distinct, developed Anchorage suburb. In 1940, Norman Lange began selling lots from his area homestead. He called his subdivision Mountain View, and the name stuck. Fellow area homesteader Nels Kleven followed in Lange’s wake. Unfortunately, when the city named a street after him in 1963, they misspelled it as Klevin, an enduring error.

Government’s Hill’s naming origin is more complicated. The oldest settler references describe the area as the “plateau,” or the “plateau north of the flat.” There are two possible reasons for the current name. First, it could be named after the 13 cottages built for permanent government employees atop the bluff during the summer of 1915, along what is now Harvard Avenue. Those housed in the cottages included Col. Frederick Mears, a member and chief engineer of the original Alaskan Engineering Commission that established Anchorage. Government employees atop a bluff equals a “government hill.”

The second possible origin came from laborers who traveled north to work on the Alaska Railroad after completing the Panama Canal. The Canal opened in April 1914, which allowed workers to make their way north to Alaska by 1915. This type of migrant life, working for a few years on a mega-project before moving on to the next, is common in 20th century America. For example, some of the laborers who built the Grand Coulee Dam in Washington traveled north to construct Fort Richardson. In Panama, a similar site housed the government offices and was known as Government Hill. The workers arrived in Anchorage, saw something similar, and thus another “government hill.”

Which name origin is more accurate? It is virtually impossible to say at this removed a date. Thankfully, the easy and most likely answer is that both origins are correct. Neither origin conflicts the other and, in fact, bolster each other. Regardless, Government Hill was established within the local lexicon by October 1915.

Lastly, Fairview is unique in that the name was changed, though so long ago that few residents recall the original neighborhood name. The first name for the community was Eastchester, for being about as far east along Chester Creek as development went in those days. This name was made official when residents voted in favor of creating the Eastchester Public Utility District on Aug. 9, 1948.

In short, areas outside Anchorage city limits could establish public utility districts (PUDs) that were authorized to collect taxes and provide the most basic of public services like water, electricity, garbage collection, road construction, dust control, grading, signage, parks and traffic lights. The Spenard Public Utility District, the largest local PUD, could afford to adequately fund its volunteer fire department and contract with the city for sewer, water and police. Eastchester and Mountain View, the other local PUDs, eventually contracted with the military for their outfall sewer and had no regular police presence while independent of the City of Anchorage.

In 1954, the City of Anchorage annexed portions of Eastchester. The largest of these sections was Eastchester Flats. The Flats was a primarily Black community between Chester Creek and 15th Avenue, east of Ingra Street. This community was cleared and dispersed by urban renewal in the late 1960s.

Without a border along the Creek, residents of the remaining, independent neighborhood rightly considered the Eastchester name unfitting for the community. Eastchester residents also disliked comparisons and confusion with Eastchester Flats. So, the Eastchester PUD immediately sponsored a renaming contest.

The submitted names included Alderwood, Aurora, Birchview, Dimond, East Aurora, Eastport, Elmwood, Fairhaven, Fairview, Garden City, Gardenwood, Lincoln Heights and Washington Heights. Of these names, only Dimond connected with local history. Anthony Dimond, the former non-voting Alaska representative to Congress (1933-1945) and judge had died the previous year. However, he had no strong connections with the area. In 1966, a section of a then far-longer Sand Lake Road was renamed Dimond Boulevard in his honor.

A naming committee narrowed the selections to Fairview, Garden City and Gardenwood, and the PUD board unanimously chose Fairview. On Sept. 16, 1954, Eastchester became Fairview. The rechristened Fairview PUD purchased four “Welcome to Fairview” signs placed at each end of the neighborhood. Greg Merims received a $50 bond for his winning submission.

The Fairview name has a long history in Alaska. South of Wasilla is what once was another Fairview, now the unincorporated village of Knik-Fairview. The Fairview Hotel in Talkeetna opened in 1923. The Fairview neighborhood was not even the first use of the name in Anchorage. In 1940, shortly after Norman Lange, Thomas Peterkin began selling off parcels from his homestead in what is now east Mountain View. He named his subdivision Fairview, the official name to this day.

There is a remote chance that the Fair View Hotel in Dawson, Yukon, inspired Merims. In 1898, Belinda Mulrooney opened the Fair View at the peak of the Klondike Gold Rush. The Fairview Hotel in Talkeetna is possibly named after its Dawson counterpart.

But Merims in 1954 and Dawson’s brief stint as a boomtown were separated by more than 50 years. Like Mountain View, Fairview is the type of name a developer or realtor would devise for a new subdivision, distinct but divorced from history, safe but bland. And Merims, a young, recently relocated Californian, was indeed a realtor. It is more likely that Merims submitted a name that would be easy to market rather than one connected to the wild history of Dawson.

“Government Hill Yesterday and Today: An Oral History of Life on Government Hill as Told Through the People That Lived It.” Anchorage: Municipality of Anchorage, Community Development Department, Planning Division, 2012.