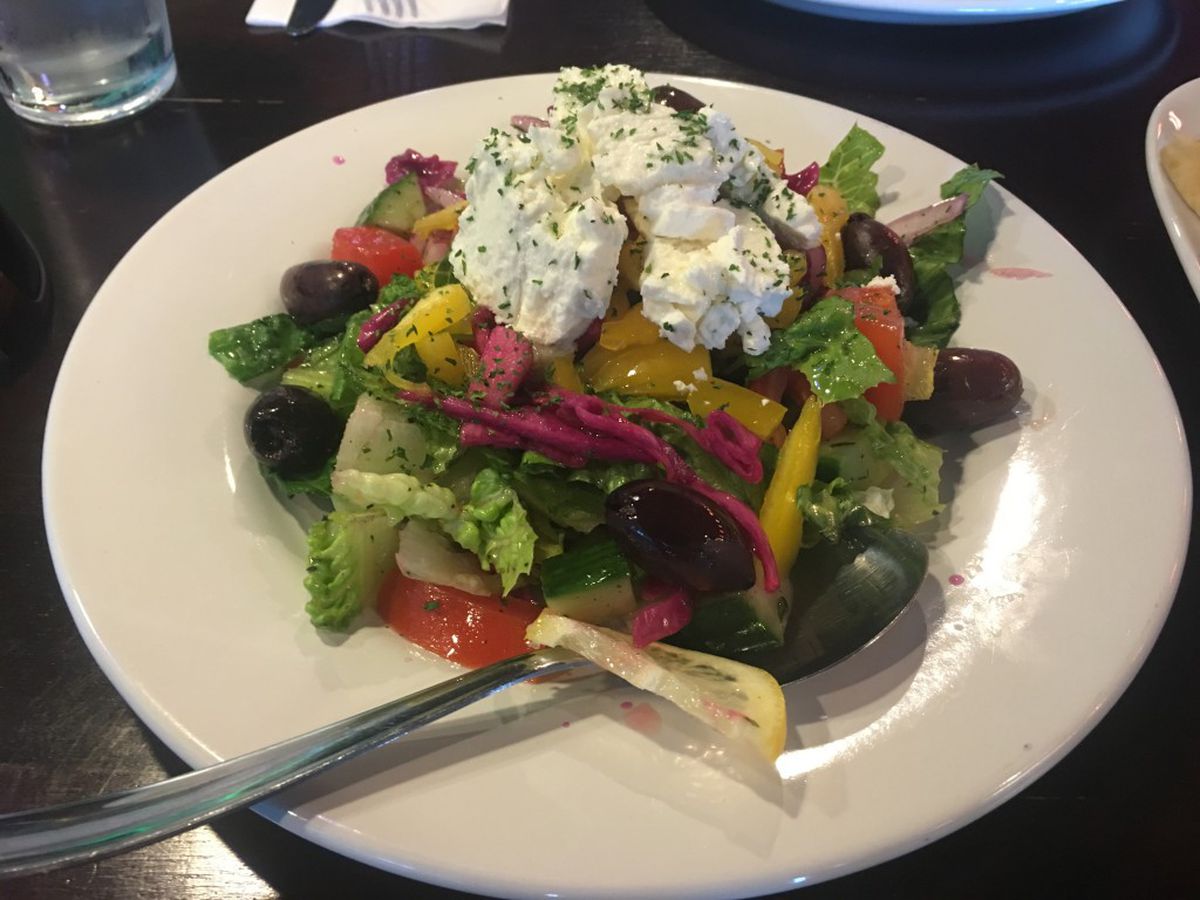 My best friend in high school was originally from Lebanon. We had a lot of things in common — Jane Fonda workout tapes, Duran Duran and any/all of John Hughes' movies (go ahead, guess the decade). But to this day, I have a feeling that I might have stayed friends with her even if we didn't. Blame her grandmother. Her grandmother's cooking, that is. A multigenerational home, my friend's house was always a place preparing for a feast.

Cooking happened all day. There were eggplants roasting for baba ghanoush, parsley being minced for tabbouleh, enormous cuts of meat marinating in bags of olive oil, lemon and (to me) exotic spices. Their refrigerator was filled with things that could only be found at a Middle Eastern specialty shop miles away — stringy, braided cheeses, containers of oily grape leaves, chewy, wrinkly black olives and thick tangy, yogurts.

There was always room for one more at their dinner table and I was always happy to oblige. The London broils and lamb racks that were the centerpiece of most meals were served on a bed of pita bread that would soak up the seasonings and juices, softening over the course of the meal to an almost pudding-like consistency. My favorite memory of those meals was being allowed to scoop up a slice of the softened bread with a spoon, which I would top with tabbouleh. That was, and remains, my favorite idea of "dessert."

Years later, in New York, my husband and I lived just around the corner from a Turkish restaurant. I could revisit those flavors any time (and end each meal with a cup of thick, sweet Turkish coffee — the original sludge cup). Since moving to Alaska, there's been a missing piece in my culinary heart. Happily, Turkish Delight, a new restaurant at the intersection of Lake Otis Parkway and Northern Lights Boulevard, has arrived to fill that void.

My husband and I went for dinner on a recent sunny Friday evening. The dining room is unexpectedly lovely, with soothing, low lighting that was a relief from the unrelenting sun we'd had that day. The walls are painted in vibrant, Mediterranean colors and adorned with Turkish rugs and other regional decor. Turkish music played softly. The kitchen is open — which I love — evidence of a kitchen that is proud of its work and has nothing to hide.

The menu is focused: a listing of Turkey's culinary greatest hits. There is a section of mezze (appetizers), which, as it happens, are all vegetarian, and another of entrees, which are all meat-based. We began with the baba ghanoush ($10) and, at the recommendation of the waiter, the spanakopita ($9).

The baba ghanoush was, to me, slightly underseasoned. I would have liked a stronger garlicky flavor and even a bit more salt. The lightly pickled cabbage garnish added the acidic pop it needed but when that ran out, I stopped eating. That said, it was soft and silky and melted beautifully into the warm pita points.

The spanakopita had no resemblance to the frozen variety that turns up at holiday parties (no judgment here — I serve them too). The phyllo dough is a magical textural mystery: crisp, tender and buttery all at the same time. These little tarts are almost overstuffed with earthy spinach and rich, tangy cheese. We had to stop ourselves from finishing them off before our entrees came — but it required fortitude.

I'm glad we saved room for our entrees — the doner kebab ($16) and the lamb pirzola ($25). The kebab is highly seasoned, cumin-y ground lamb and beef thinly sliced off of a vertical rotisserie. This dish is so flavorful and so savory that I'm making myself hungry just describing it. A tangy tzatziki sauce perfectly balanced the saltiness of the meat. The portion was generous but there were no leftovers. We kept finding room for one more slice.

The lamb pirzola was another hit. This dish is simple — lamb chops marinated in oil, lemon and lime. Without a sauce to cover it up, its success depends on the quality of the meat and a perfect cooking technique. The chops were perfect — medium rare, beautifully tender, with the fat perfectly rendered to give a butteriness to the meat. We ate these with our fingers to make sure we got every last morsel off the bone. Both entrees were served on white rice with a pleasing shepherd's salad, lemony bright with red onions, parsley, cucumbers and pickled red cabbage.

I returned the following week for lunch with my friend Alison. We began with the carrot yogurt spread ($6) and the Anatolian salad ($12). The carrot dip was a surprise — not a puree as I expected but rather a dish of sautéed, shredded carrots with an interesting texture. There's a generous amount of olive oil in this dish, which helps it pull off the curious trick of being essentially healthy while tasting incredibly decadent.

The Anatolian salad, with its generous portion of olives and feta, was heartier than the shepherd's salad. With a plate of warm pita, it would make the perfect lunch entree all by itself.

For our entrees, we ordered Muratti's kofte ($15) and the Adana shish kebab ($18). The kofte (meatballs) were perfectly charred on the outside yet juicy on the inside (a trick I've never been able to master in my own kitchen). I mentally made a note that this was a dish that my daughter Clover (notoriously picky) would eat with great relish — simple, hearty and comforting.

The kofte were a savory, comforting plateful, and I'm glad I sampled them before digging into the Adana kebab. This shish kebab — ground lamb and beef cooked on skewers — delivers on heat, which would have spoiled my palate for the milder meatballs. Spicy and peppery, this dish is not tongue-numbingly hot but creates a tantalizingly slow burn. The kind that has you reaching for your water and then back for your fork.

Added bonus: the kebabs were resting on strips of warm, chewy pita bread absorbing the delicious juices and spices. I scooped the softened bread up with a spoon and ate it for dessert.

Middle Eastern cuisine was one of my first foodie adventures, at a time when global cooking wasn't available everywhere (read: Suburban New Jersey). I'm glad that times have changed. Eating at Turkish Delight allowed me to revisit that culinary awakening. And I am, of course, delighted.