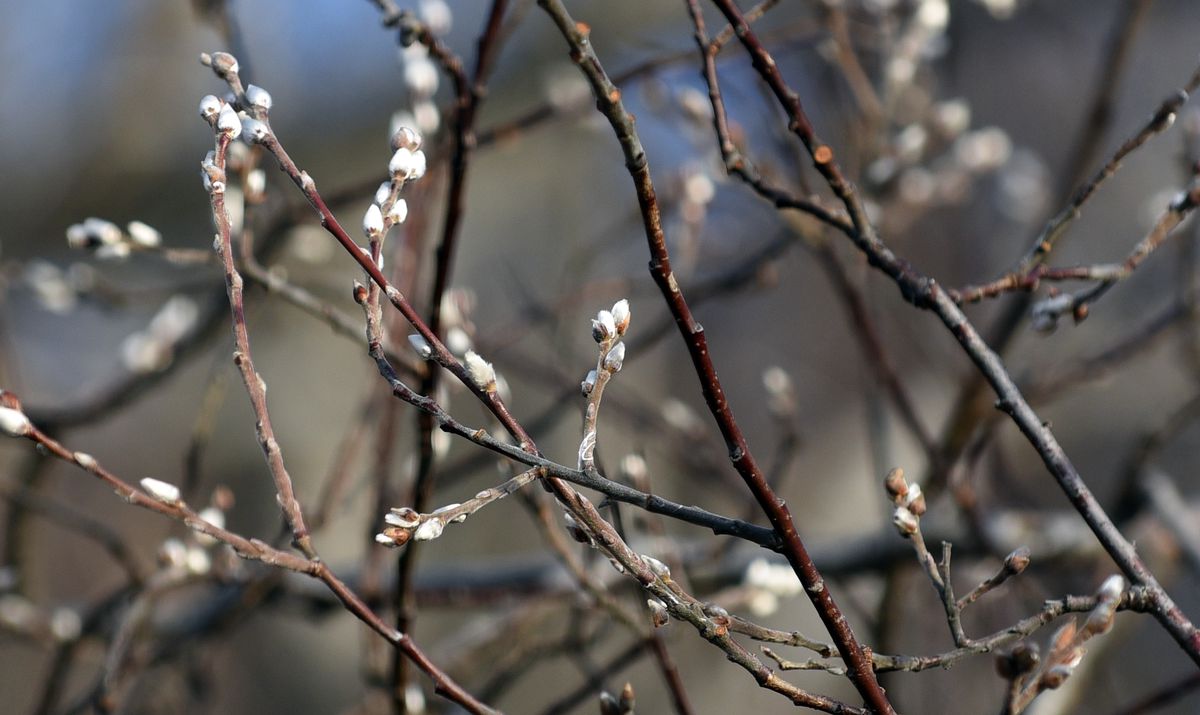 Willow catkins -- which normally emerge in spring -- were out on the south-facing slopes of Mount Baldy near Eagle River on Monday, Nov. 4, 2019. (Matt Tunseth / Chugiak-Eagle River Star)

Willow catkins -- which normally emerge in spring -- were out on the south-facing slopes of Mount Baldy near Eagle River on Monday, Nov. 4, 2019. (Matt Tunseth / Chugiak-Eagle River Star)

I usually get a few questions this time of year about what to do with spring-flowering bulbs that arrive via the mail well after the hard frosts have begun and the ground is hard as a rock. The choices were toss them or pot them up for indoor forcing. I guess I won’t be getting any of those this year!

Who would have ever imagined that you could still plant bulbs on the third weekend of November? Or that you could probably even get away with waiting an additional week after that?

It reminds me of those pictures you see in National Geographic of what Alaska looked like in the days of the dinosaurs, a lush, tropical lunch room for them. Are we headed that way? Palm trees, tar pits and more? This month, temperatures in Anchorage are 13 degrees above normal, with Fairbanks temperatures 7.5 degrees higher. We’re on a run of whopping 20 months of record-breaking temperatures, with no let-up in sight.

Is this settling in for you? Did you miss the article about pussy willows flowering right now in area woods? We are still harvesting herbs. What is going on?

As I write this, my brothers in New York are wearing their down jackets while I don’t even know where mine is yet. I sure plan on teasing them (“Global warming? It’s our turn now!" Ha, ha!). However, the joke is most probably on me, not them. Pussy willows flowering? Are lilacs next? Can raspberries be far behind?

Climate change is affecting places in the world in different ways. Water levels are raising. Glaciers are melting. Fires are burning. In the Arctic, however, a key characteristic is that warming is happening faster than in other places on Earth. In fact, it is two to three times faster.

In Alaska our average temperatures are up 2 degrees Celsius (3.6 degrees Fahrenheit). I use Celsius because the whole world needs to be on the same page and Celsius is the global norm, so we have a common understanding of the disaster we are facing. Southcentral and Interior are up even higher than the Alaska average, a whopping 5 degrees Celsius.

We need to confront this huge change when it comes to gardening. I am just not sure how we should do it. I know we have to be concerned about non-native plant species, but at some time warming makes for invasions of invasives. I know we need new trees in Southcentral. I know we have a moth problem hitting wild berries that many rely on for subsistence. I am thinking on it, and you should as well.

Next year, I will definitely be urging all Alaska gardeners to start second crops of broccoli and cauliflower in the middle of the summer, anticipating the longer season will allow for a second harvest. I will be rethinking when we should approach pulling potatoes, dahlias and gladiolas. Maybe we should be re-mulching beds a couple of weeks later. Starting dates for outdoor gardening need to be changed. Should we be clearing outdoor greenhouses as early in the fall as we do now, or are there now a few more weeks of tomatoes to get? And better yet, aren’t nights staying above 55 degrees, so we can plant tomatoes outside in our gardens like gardeners do elsewhere?

I am already studying if this longer period of warm weather will allow us to deal with weeds in a different way. Are there seeds we should now be planting in the fall instead of spring? What should our local nurseries be doing to deal with and take advantage of both warmer temperatures and longer seasons?

Nothing is for sure when it comes to nature or Alaska. And even if it is certain that we are in a warming era, there may well be a transition where one year we get really warmer weather like this year’s and the next year we get a killing frost by October and snow by November. I am one who believes the experts here.

Weather changes make it tough to be a garden columnist anywhere, but I am thinking it is going to be a bit more difficult here than elsewhere. Help me, please: If you see anything unusual or weird going on in the yard you think is a result of the warmer weather, let me know. We are going to have to figure it out and work this all out together. No one is left from those tar pit days to let us know what to expect, so we have to figure it out on our own.

Mulch beds: There are leaves all around your property that you can use to put around raspberry canes to stop grass and weeds from growing in your patch while feeding your plants. Cover strawberry beds as well. It won’t hurt to put leaves on all the containers remaining outdoors. Don’t forget beds in greenhouses. There are no bare soils in nature.

Plantskydd: It’s still warm enough to apply this moose repellent around the property.

Check out Jeff Lowenfels’ new book: ”DIY Autoflowering Cannabis, A New Way to Grow Your Own,” available on Amazon and at bookstores.