Weed on a plane: How Alaska businesses get pounds of pot on board, with police blessing 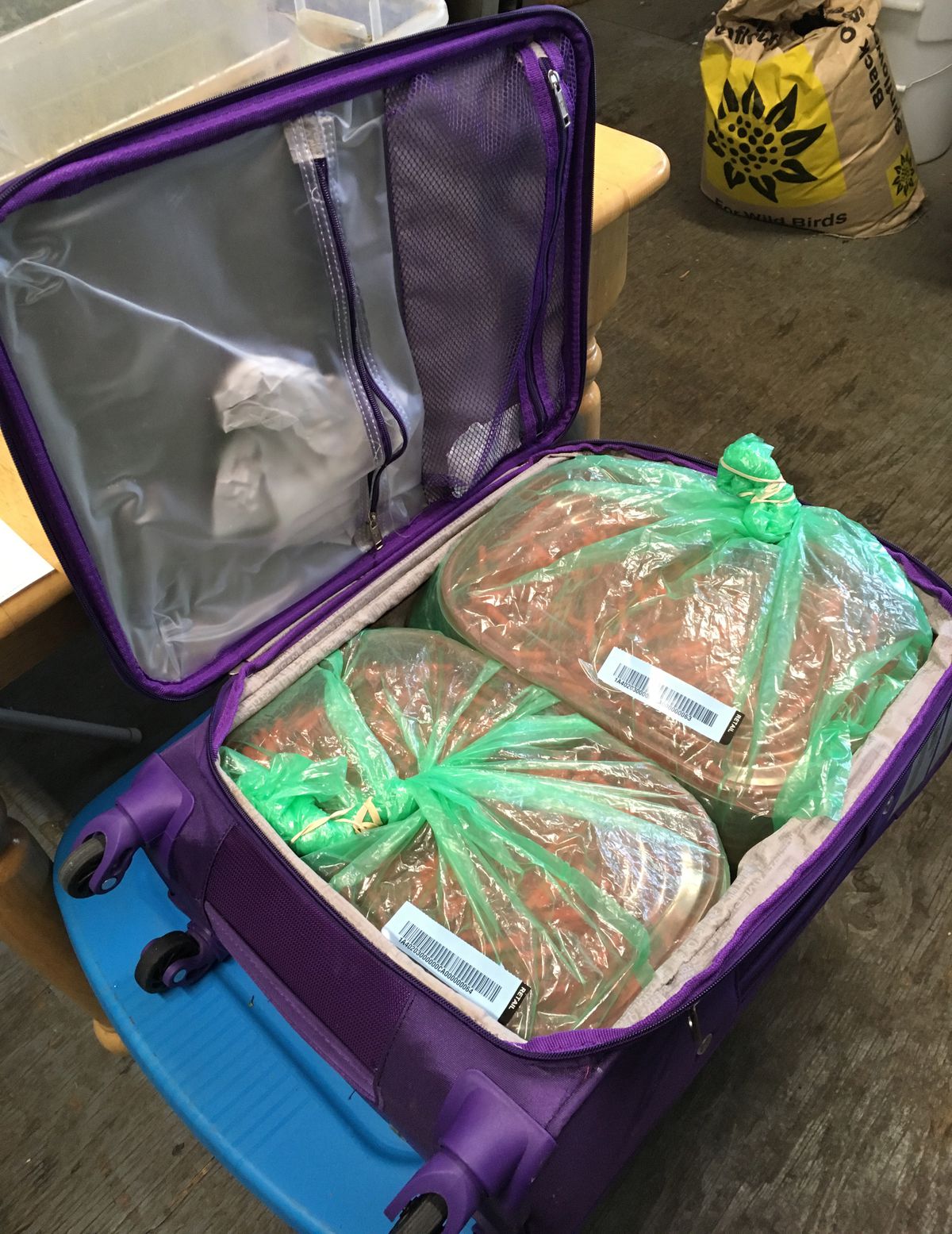 2,500 prerolled joints in a bag with odor control bags for an Anchorage to Sitka flight. (Michelle Cleaver / Weed Dudes)

2,500 prerolled joints in a bag with odor control bags for an Anchorage to Sitka flight. (Michelle Cleaver / Weed Dudes)

The first time Michelle Cleaver arrived at the Ted Stevens Anchorage International Airport with 5 pounds of marijuana in her carry-on, she was understandably nervous.

"I was so scared, and I learned that I needed to find a new antiperspirant, because mine failed miserably," Cleaver said.

Cleaver, owner of Weed Dudes, a marijuana store in Sitka, was taking the commercially grown cannabis from Anchorage to her shop in the Southeast Alaska community.

That first trip was Dec. 30. In the months since, she says she has carried marijuana, thousands of joints and many pounds of edibles onto commercial aircraft numerous times.

Other cannabis businesses have started following her lead. And it's all done with the blessing of airport police.

[Legal marijuana ends at airport security, even if it's rarely stopped]

Flying with marijuana seems to solve issues unique to Alaska's cannabis industry: It allows communities accessible only by sea or air, like Sitka, to bring commercial marijuana into the city.

But like many aspects of the cannabis industry, flying with marijuana comes with inherent risk and opaque, ever-evolving policies.

The federal government still considers marijuana a Schedule I substance, right alongside heroin. It's not supposed to cross federally regulated airspace or waterways, and once you enter those areas, you face federal law enforcement, instead of state police enforcing state law.

Cleaver believes she found a way around this conundrum. She says it took months to put together the pieces and make the leap to fly with marijuana. Her strategy rests on full disclosure — except for one thing.

'We haven't had any problems'

Airports in states with legalized marijuana have adopted different policies. In Portland, Oregon, marijuana is allowed on in-state flights. In Denver, it's not.

Anchorage airport police have been allowing small amounts of marijuana through security for years. In November, police at the Fairbanks International Airport adopted the same policy.

Those two airports also let marijuana businesses carry through much larger quantities of cannabis, so long as the passenger is following state law.

Cleaver says she has developed a system. She lets police know beforehand when she'll be there. When she gets to the security checkpoint, she alerts TSA.

TSA is a federal agency, but its focus is on security threats. Its agents don't search for marijuana. If TSA agents see marijuana, they call law enforcement, according to TSA spokesperson Lorie Dankers.

Law enforcement decides what to do, according to Dankers.

The rest goes as follows: Airport police show up. They check the required travel manifest and other state documents.

"As long as they have all of their proper Marijuana Control Board documentation … they can continue to travel at their own risk," said Deputy Chief Aaron Danielson with the Fairbanks International Airport Police and Fire Department.

Jesse Davis, chief of the Anchorage Airport Police and Fire, says they've been alerted a handful of times to businesses traveling with marijuana, and police follow the same procedure as Fairbanks.

"We haven't had any problems," Davis said.

Juneau police have not adopted this policy, instead saying officers would alert the airlines if TSA allowed marijuana through a checkpoint. Juneau Police Department Lt. David Campbell called it a "fluid situation."

Mike Emers, owner of Rosie Creek Farms, a Fairbanks marijuana cultivation facility, picked up Cleaver's lead. Emers traveled from Fairbanks to Anchorage with 5 pounds of marijuana in late February. He was nervous, too.

"Of course I was. I hadn't done anything like that before. It was, yeah, it was a little nerve-racking," Emers said.

But the winter roads were bad, Emers said, and he was already heading to Anchorage for his daughter's soccer tournament. Flying served as both a time- and cost-saver.

Like Cleaver, his bags were inspected by airport police, and he was free to go.

"As long as you let people know what you're doing, and that you're within the law … I don't see a problem," Emers said.

Alaska's Alcohol and Marijuana Control Office, which oversees the state's cannabis businesses, knows some business owners are flying with marijuana in their carry-on luggage, AMCO Director Erika McConnell wrote in an email.

The state office's primary concern is to make sure businesses are following Alaska law, McConnell wrote.

To follow state rules, Cleaver made the call to keep the commercial marijuana in her possession at all times while she travels, although that's not explicitly defined.

That means Cleaver flies with carry-on bags only. She's discovered that in her one large carry-on, she can carry 5 pounds of bud, or about 6,000 joints, or 65 pounds of edibles.

Odor is another consideration.

"If it smells like pot, the whole deal's off," Cleaver said. So she purchased thick packaging. Sometimes she has a friend do a smell-check.

Emers said odor wasn't a problem during his trip.

To disclose, or not to disclose?

Alaska Airlines is clear that marijuana is not allowed on its flights. On its website, marijuana is listed as a prohibited item alongside flammable liquids and explosives.

Alaska, like all other airlines, follows Federal Aviation Administration regulations. Under those regulations, an airline is at risk if it knowingly carries marijuana.

But there is no rule prohibiting passengers from bringing marijuana onboard, wrote Allen Kenitzer, FAA spokesperson.

If someone did bring marijuana onto a plane, the FAA would investigate whether the certificate holder — the airline or pilot — complied with the law, Kenitzer wrote.

So this is the part of the disclosure that Cleaver omits — she doesn't tell the airline about the marijuana. She figures if the airline doesn't know, it's not violating those FAA laws.

If a person does fly with marijuana, it actually makes sense not to tell the airline, but that decision leaves the business between a rock and a hard place, said marijuana attorney Jana Weltzin.

When marijuana businesses travel with weed, they have to document every detail of the journey in order to stay within the state rules. But disclosing the marijuana triggers the airline's response.

Airlines can deny a passenger from boarding. And there's still a risk — even if it doesn't appear to have played out in Alaska — that federal law enforcement could seize your marijuana and charge you, Weltzin said, since you'd be flying in federal airspace.

"I don't think we can search every bag. All we can do is let the customer know what the rules are," said Marilyn Romano, regional vice president.

Cleaver says it can still be scary to travel with marijuana. But airport officials have now started to recognize her when she flies.

"It has gotten easier," Cleaver said.