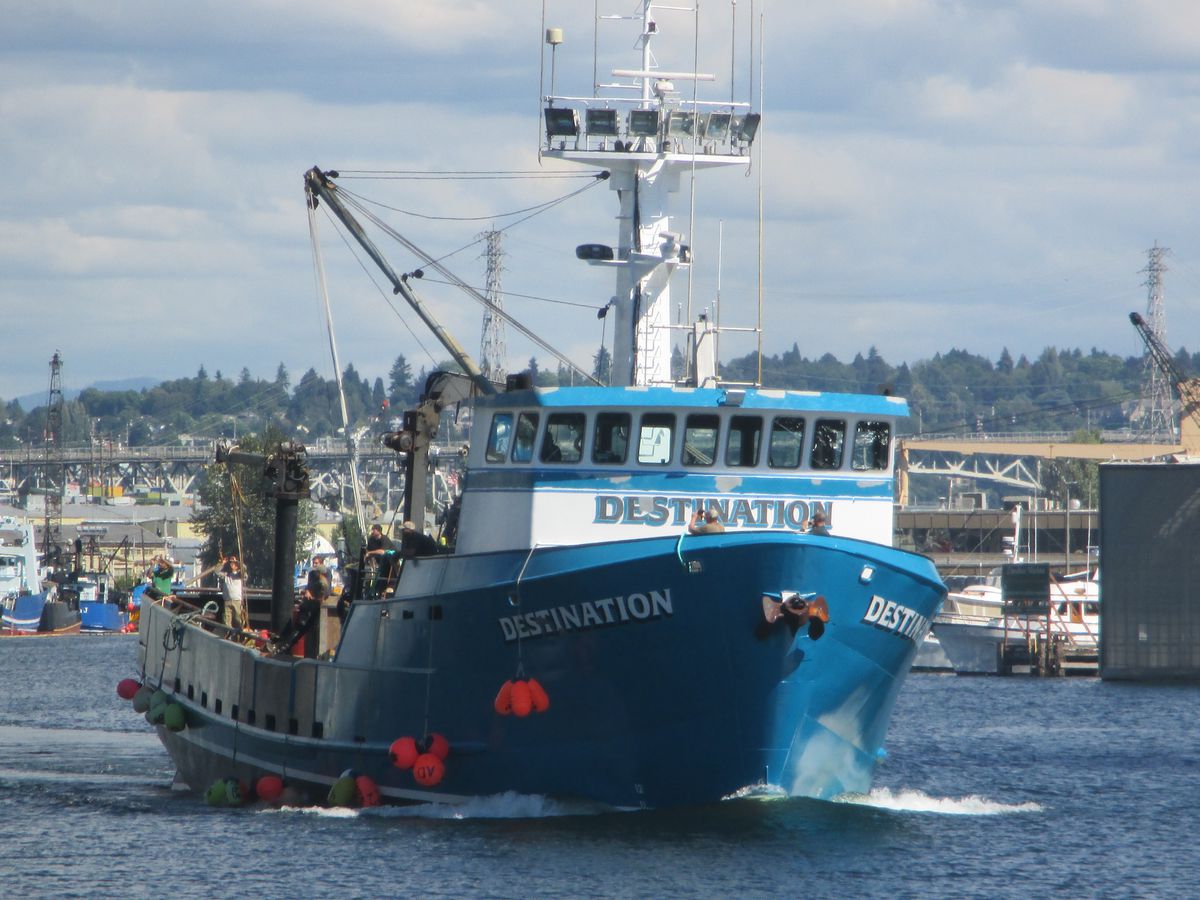 The 92-foot F/V Destination, which went missing with six people aboard in the Bering Sea on Feb. 11. (Photo by Salty Dog Maritime Marketing)

The 92-foot F/V Destination, which went missing with six people aboard in the Bering Sea on Feb. 11. (Photo by Salty Dog Maritime Marketing)

SEATTLE — When Capt. Casey McManus of the Cornelia Marie made a trip to Alaska's Dutch Harbor on Sunday to get supplies, he made a point to traverse a tide-churned patch of the Bering Sea — just off St. George Island — where the F/V Destination went missing.

He and his crew tossed a dozen yellow roses over the side in memory of the six crabbers who were lost Feb. 11.

"It was kind of a weird thing, but it helped me feel a little closure about the whole deal, and we're concentrating now on how to support our lost brothers, families and their kids, " said McManus, skipper of a crabber once featured on the "Deadliest Catch" TV show, who is helping spread the word about a F/V Destination memorial fund.

The Destination's owner, David Wilson, who lives in the Puget Sound area, has not responded to requests to name the six crew and their hometown, citing concerns about the families' privacy.

Wilson's attorney on Tuesday referred The Seattle Times to the Facebook page McManus and other crabbers set up to publicize the fund. The page names the missing: Destination Capt. Jeff Hathaway; Larry O'Grady, who McManus said served as a relief captain; and crew members Raymond Vincler,Darrik Seibold, Charles G. Jones and Kai Hamik.

In addition to the memorial fund to help support the families, separate funds have also been set up for some of the individual families.

McManus said the crew were all skilled veterans of the Alaska king- and snow-crab fleet, which during the past decade has a dramatically improved safety record. He called Hathaway, the skipper, one of the most competent captains in the fleet.

"He was a guy that was probably even too professional to go on 'Deadliest Catch' because he didn't make that kind of drama, McManus told The Times in an interview from Dutch Harbor. "He wouldn't take any risks unless they were very calculated, and even then they would be very small."

The U.S. Coast Guard said Thursday it will conduct a Marine Board of Investigation – the highest level of agency inquiry – into the loss of the Destination.

The investigation is being done in conjunction with the National Transportation Safety Board, according to Lt. Brian Dykens, a Coast Guard spokesman.

Coast Guard Marine Board investigations include a series of public hearings at which witnesses are called. A final report includes a determination on the most likely cause of a maritime accident as well as recommendations to improve safety that are submitted to the Coast Guard commandant.

Because there was no mayday call from the crew, it will be very hard to determine the events that led to disaster.

McManus was in the Bering early Feb. 11 when the boat vanished. Other vessels that day, he said, encountered freezing spray, which leads to ice forming on the boats and gear. If it's not knocked off, stability is reduced.

McManus said the temperature near St. George is typically significantly colder. That could have intensified ice problems in an area governed by strong tidal currents.

Searchers found life rings and other debris but did not find a life raft that typically breaks free from a sinking vessel. McManus said that could mean the vessel suddenly rolled over, and the raft was not able to separate before the Destination went down.

The Destination and its crew had roots in Alaska and Washington. The vessel is registered in Sand Point in the Aleutians, where Wilson grew up. The vessel sailed out of Seattle.

McManus said the Destination crew was outgoing and friendly with other crabbers and people in Alaska's fishing communities. So their loss cuts a wide swath.

"They were all such good guys," McManus said. "Everyone sort of walks around in Dutch Harbor and stares at each other in disbelief that it would happen to this boat."