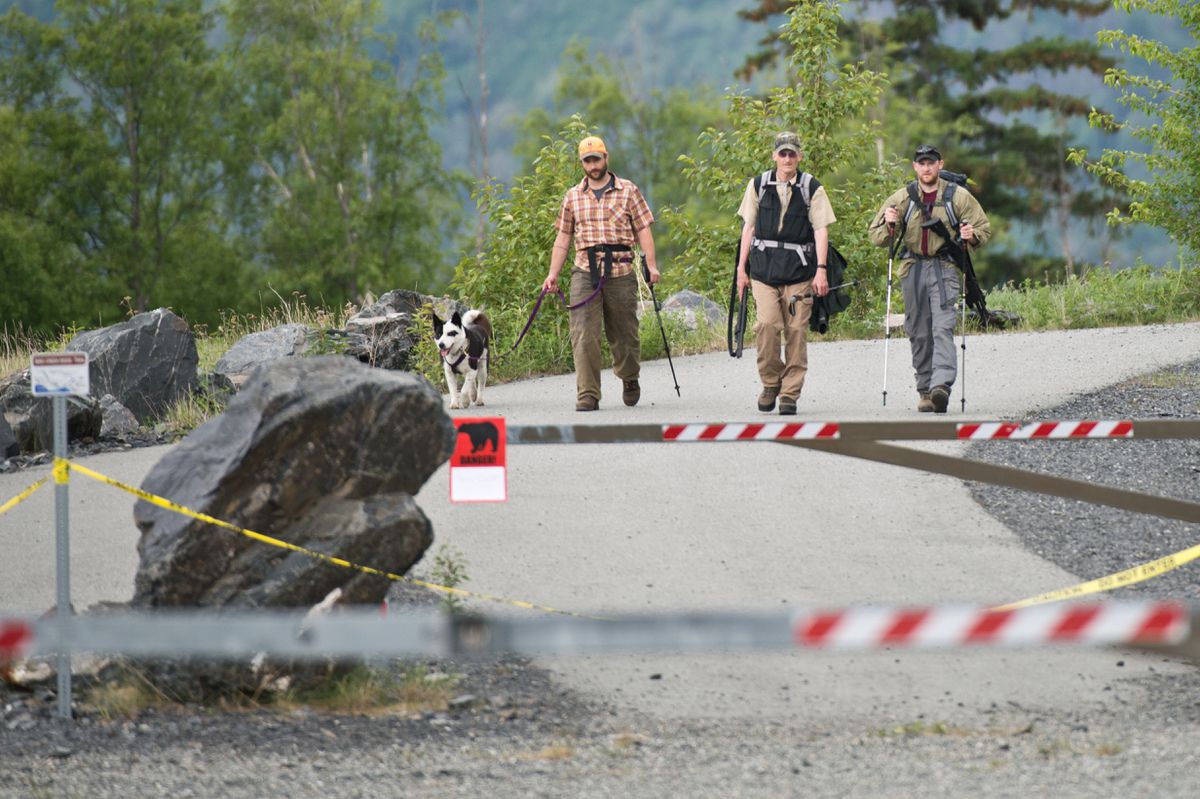 State biologists searched Monday for a wounded black bear that is believed to have killed a teenage runner in a Bird Ridge trail race south of Anchorage on Sunday, but they couldn't find the animal in the rugged, steep terrain of the mountainside where it was last seen, the Alaska Department of Fish and Game said.

The runner was identified by Alaska State Troopers as Patrick Cooper, 16. He would have entered his junior year of high school this fall.

His death is the first deadly bear mauling in the Anchorage area since 1995, when Marcie Trent, 77, and her son Larry Waldron, 45, both well-known local runners, were killed on the McHugh Creek Trail, said Alaska Department of Fish and Game spokesman Ken Marsh.

"There have been many maulings with injuries, though," Marsh said.

The death of a teenage runner near a popular, heavily traveled trail at the peak of Alaska's outdoor season raised fears about wildlife and questions about just what races and events should — or can — do to ensure their participants' safety.

While little is yet publicly known about Cooper, pictured in a 2016 East High School yearbook as a sweet-faced freshman, more details about the timeline of the race began to emerge Monday. Still, much remained unknown about Cooper's fatal encounter with a bear.

On Sunday, the 16-year-old and his brother and other family members were running the Robert Spurr Memorial Hill Climb, said race organizer Brad Precosky. The event is a popular mountain race that takes entrants up a steep course on Bird Ridge, a peak in Chugach State Park between Anchorage and Girdwood.

The juniors race started at 10:11 a.m. exactly, Precosky said. Timing records show Cooper reached the turnaround point for juniors in the race, about 1.5 miles from the trailhead, at 10:50 a.m., with eight entrants in the junior division behind him, according to race officials. In the race, only the uphill portion is timed. Racers descend at their leisure.

What happened next is not clear. Hundreds of people were on and around the trail during the race: runners, spectators and race volunteers, including a trail "sweeper" who was supposed to follow the last runner, according to Precosky. No one saw Cooper go off trail, Precosky said, but based on the area he was found in, "we know that he was probably lost for a while." If Cooper had gotten off the trail, he would have been met by heavy, thick brush and confusing spurs where a trail goes "for 10 feet, to an overlook, and then kind of stops there," Precosky said.

At 12:37 p.m., Cooper sent a "distress message" by phone to a family member who was also at the race, Precosky said — something about being chased by a bear. When the family member alerted race organizers, a group of people, including the racer's mother, headed back up the trail to look for him, he said. They used the "find my iPhone" app to pinpoint his location, which was about a mile from the trailhead and about 500 yards off the trail to the south in difficult, steep, heavily wooded terrain, according to Chugach State Park ranger Tom Crockett.

The first person on scene to actually see the bear was John Weddleton, an Anchorage Assembly member who was a spectator at the event, according to Precosky. Weddleton did not return a call Monday. Precosky said another person in the group sent him a text message from the scene at 2:50 p.m.: "Eyes on bear. Guarding the body. Coordinates were correct. Need a weapon."

When state park rangers got to the site, one of them shot the bear to get it away from the body, said Crockett. The wounded animal ran off and hasn't been seen since, said Marsh, the Fish and Game spokesman. Finding the bear is now a priority, Marsh said.

On Monday, a Chugach State Park ranger accompanied Fish and Game biologists and a volunteer with a dog trained to track for bears to the site of the attack. Then the biologists went off on their own, looking for what park rangers described as an estimated 250-pound black bear.

"We covered a lot of ground," said the Karelian bear dog's trainer, Nils Pedersen, a trainer with the Wind River Bear Institute.

The dog, Soledad, led the searchers to an area with what was believed to be the bear's blood, but no bear. Then the track dried up, Pedersen said.

"It was pretty steep, rocky and dry. There was a lot of bear sign, as well as moose. We couldn't get a good track on that specific bear."

Marsh said that searchers did see a black bear close to the road, but it was a different, "cinnamon-faced" animal than the one a state park ranger shot. The Bird Ridge parking lot and trail was closed as of Monday afternoon.

The biologists will likely return to the scene on Tuesday, and if weather permits may use a helicopter to search from the air, Marsh said.

Precosky said he and others in the mountain running community are reflecting on the tragedy that took the life of the teenager.

"I think everyone is just terribly sickened by the whole episode," he said.

Mountain running in Alaska carries inherent risk, because virtually everywhere runners go is bear country, he said. But he said races — especially a popular one like the hill climb with lots of spectators and participants relatively close together — is safer than an average weekend training run, when people are sparse.

"Mountain runners are never safer than when they are in a race. How often do you have 300 people around you, making noise?" he said.

Precosky said race organizers took precautions such as having medical personnel on the trail and a "sweeper" to check that runners were getting off the mountain. There was no rule about carrying bear mace or any other protection from wildlife.

"I don't have anything about carrying bear mace in the rules. This has never happened. In the entire history of the race I've never known of any bear incidents," he said.

Will organizers do anything differently next year?

Precosky said that's under consideration. Seward's Mount Marathon race on July 4 requires participants to have been on the course before the race itself as a safety measure, he said. Another possibility would be requiring at least junior runners to come down in pairs, he said.

"I think everyone is really shaken up," he said.