38 minutes of fear: Alaskans in Hawaii get terrifying practice run at a missile crisis 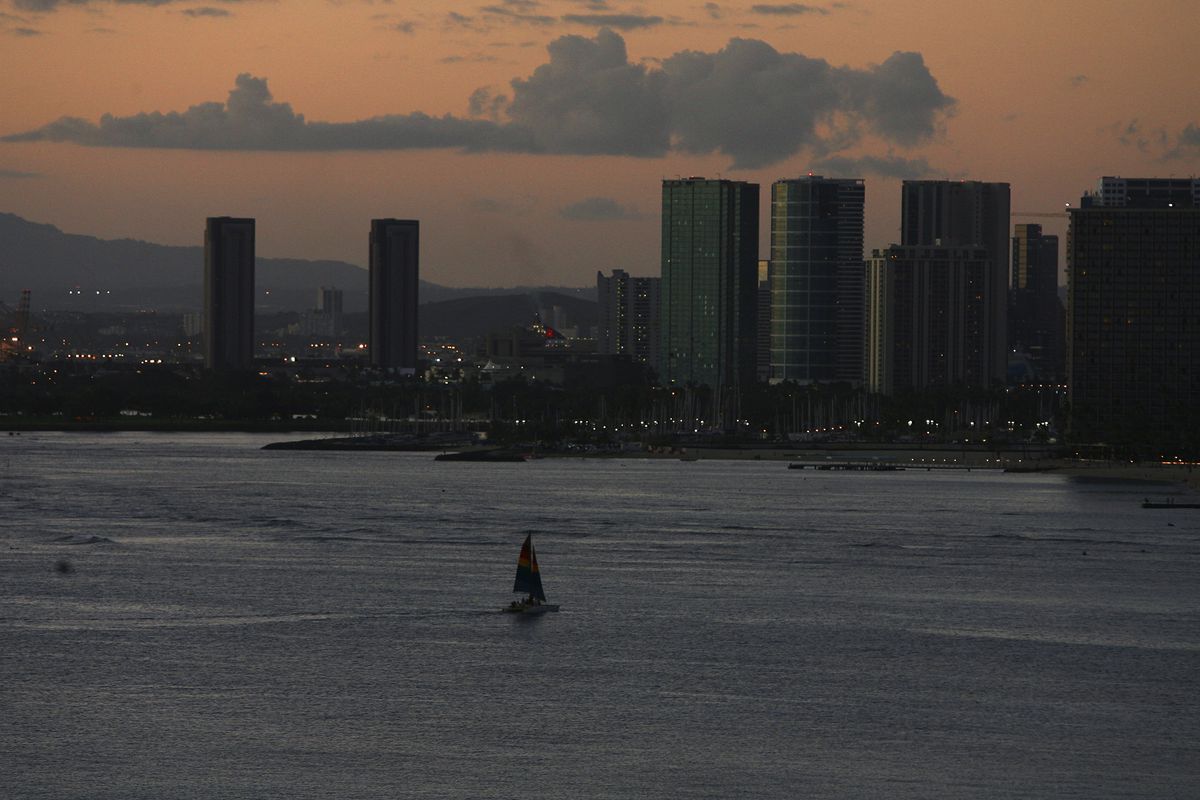 When an alert of an incoming ballistic missile began popping up on cellphones all over Hawaii, vacationing Alaskans were among those panicked and scrambling for safety and information.

But for 38 minutes, Alaskans in the Hawaiian Islands were scared and confused, just like locals. Alaskans by the planeload land daily in Hawaii, a popular destination during the darkest, coldest months here. Suddenly, dream vacations were punctuated with moments of terror.

Sitka's Caroline Mau, her husband and three children were staying in a rental on the 35th floor of the Royal Kuhio in Waikiki, part of Honolulu on the island of Oahu. Her toddler was playing with her phone when it made a strange, loud noise.

"It was almost like a fire alarm," Mau, 31, said a few hours later. She wondered what her toddler had gotten into. "What the heck is going on? I never heard my phone make that sound. I didn't even know it could."

She grabbed the phone and saw the message: "Emergency alert: Extreme." Get to shelter. It was not a drill, the warning said.

She collected her infant, her teenager took charge of the toddler, and her husband helped her parents get to the ground level. An employee directed them to the underground garage, which didn't seem that safe either.

Her husband, Ryan Mau, an Alaska state trooper who teaches at the academy in Sitka, situated their family by the fire exit and told them to be ready to dash outside if the building were about to collapse.

Her sister-in-law was elsewhere in Honolulu near a channel of water. If a missile hits, jump in, she was told.

"My parents were saying their 'I love yous,' " Mau said. "I was just trying to hold it together."

They were in one of the most densely developed parts of Hawaii — not the place to be during a missile attack, she said.

Nearby, Maggie Demiri of Anchorage and her family were sitting down to breakfast at Hyatt Place Waikiki.

"All of a sudden, we see people getting up from their tables and just running," she said. Their room was on the 19th floor; the restaurant was on the third floor.

They rushed with dozens of others to take the stairs down to that hotel's underground garage.

No one knew what to do or where to go. People were at a loss, she said.

"Everybody was on the phone trying to call their loved ones, trying to figure out what is going on or saying their last goodbyes," said Demiri, 34. "People are on the ground crying. It was chaotic and horrific."

What were they going to do? she kept saying. She had no formula for the baby. She kept checking CNN and MSNBC on her phone, but there was no news on whether the missile attack was real.

One man in the garage — military or retired military — provided a voice of authority and calm, she said. He was with his family on vacation too, she said, but he took charge, directing everyone to an area that appeared to be safe and well-reinforced with concrete. And he was calling his contacts in Hawaii.

When hotel employees came into the garage to report the false alarm, everyone looked to the military man.

"I'm not moving until I get a phone call with the military here in Hawaii," he said. Everyone stayed put, Demiri said. He got the call, and everyone left.

"It was the scariest 38 minutes of my life," she said.

Also in the Honolulu area were five women from Anchorage who gathered at the Marriott's Ko Olina Beach Club to celebrate one of their 40th birthdays.

Three were out of bed when the text warnings arrived around 8:08 a.m.

"We screamed and woke up the other two — and ran down 11 flights of stairs in our bare feet and pajamas," said Adrianna Griffith, 38.

A bellhop brought their car around but they weren't sure what to do. She told them the roads would be congested and driving would be hard.

Between them, the five women had 11 children plus husbands back in Alaska. The bellhop said she has children too. She prayed over them in Hawaiian. They cried and followed her instructions to stay put.

The hotel opened up a ground-floor room. The friends sat on the floor. People were calm. The women texted their husbands for information and guidance. It was a false alarm, some texts said.

What did they learn about emergency evacuations? Grab shoes and stick together, Griffith said.

In Kona on the Big Island, one vacationing family from Anchorage quickly mobilized.

Angela Peacock, 41, said the alert hit her husband's GCI phone at 8:08 a.m., but not hers, with service from AT&T. Others with AT&T said they got the false alert.

An older daughter had already left Hawaii to return to college — at least she was safe, Peacock said. But 10 family members were still on the island.

Peacock and her husband, Noyuk, decided to leave the populated Kona coast and seek high ground. They have two children under age 2 and packed the car with water, diapers, formula, bottles and an iPad.

"We were out of here within 18 minutes," she said. "We weren't messing around."

Her brothers-in-law and their girlfriends decided to stay put. Her husband's parents were flying out that morning and were evacuated from the airport. Flights were grounded.

The Peacocks didn't want to be stuck and thought maybe they could get to a church.

As they drove away, they passed walkers and runners looking at their phones wondering what to do.

"It felt like nobody was doing anything," she said. "We were acting."

It wasn't until 8:45 a.m., or for some a minute later, that people received a follow-up message from Hawaiian authorities officially correcting their mistake.

She said she's happy the missile warning was a mistake and glad for the practice run.

"People have control over their situation," Peacock said. "If you are able to get out, you get out."

Also on the Big Island, Eric Stevenson, 48 of Talkeetna, was with family and friends in a Waikoloa Village condo when the alerts came in.

"Seven of us piled into the bathroom and started in our phones trying to find out if it was real or fake, and got nothing," he said.

That was the only spot without windows, but they lasted there for maybe 15 minutes. They suspected the alert was false since they didn't hear any alarms.

Still, the experience was horrifying.

"Everything just starts flashing through your head," he said. "It's all the what ifs. What kind of missile is it? Is it nuclear? Is it just going to go boom?"

"We're in front of the beach in Waikiki," Demiri said. "It's beautiful weather. People are out in the beach. Surfers are out. Boats are out. People laying in the sand, people playing with their children, like I am about to do."