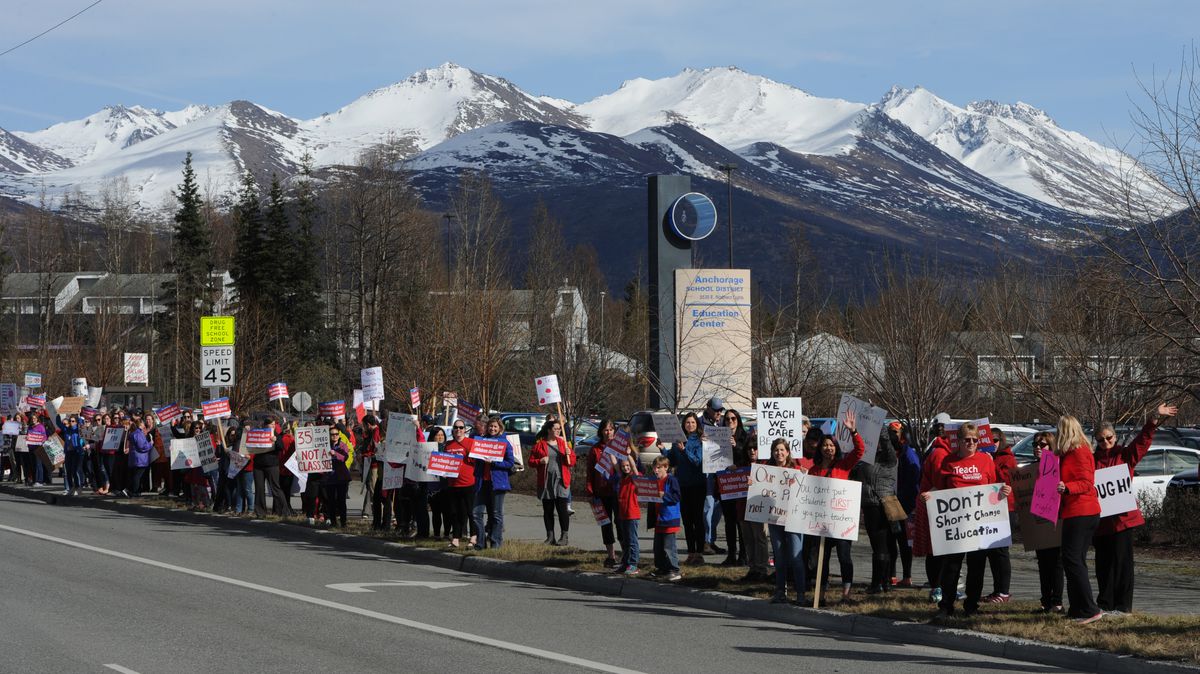 They want that contract to be negotiated publicly, not behind closed doors as it usually is.

"We absolutely are standing up now and saying, 'We need a better contract,' " said middle school teacher Michelle O'Leary. "People are really frustrated."

Monday's rally came amid the latest round of contentious contract negotiations between the union that represents educators and the school district that employs them. It also came at a time when the district says it's facing serious financial constraints.

"There isn't any new money put into the system, so we're going to negotiate another contract based off of the same money that we had last year and the year before," Superintendent Deena Bishop said.

On Monday, teachers spoke of increased workloads, increased class sizes and an increase in the number of district-mandated programs that they said they do not believe are working in their classrooms. Some said they do not feel supported by the district.

"The district, on the one hand, is in a budgetary pinch and we get this but, on the other hand, there are a lot of things that are in their control that don't cost money to demonstrate they value educators," Klaameyer said.

As Bishop and school district administrators attended a School Board work session inside district headquarters Monday, Klaameyer and at least 500 other people were outside lining the sidewalks. A majority of those people were educators, he said.

Some cheered as vehicles driving by honked their horns. Many carried signs with messages that included "35 is a speed limit. Not a class size!" "We demand: The schools all our children deserve!" and "Don't shortchange education." Most people wore either purple, the union's color, or red, in unison with the #RedForEd movement that has included walkouts in other states over low pay and declining education funding.

"We're capitalizing a lot on the #RedForEd movements of teachers just really standing up and saying we need better in public education; we need to have the Legislature give a respectable amount of funding to districts; we need districts to be providing things that are supportive of students and teachers," O'Leary said.

O'Leary was one of the teachers who started the private Facebook group called "AK Teachers United" last week as another rallying point for Anchorage educators to join together in their demand for an improved contract before the next school year begins.

They want that contract to give teachers more academic freedoms, protect planning time and include adequate pay and health benefits, according to the group's description.

Negotiations for that one-year contract dragged into this school year. The two sides just finalized the agreement in February, and the contract went into effect retroactively to July 1, 2017. It included two more personal days for union members and increased the district's contribution to their health insurance premiums. But it did not include the 3 percent raise the union asked for.

According to initial proposals for the upcoming contract, the district and union remain far apart on salaries. The proposals represent the starting point for each group, Klaameyer said.

The union also asked the district to increase its monthly contributions to members' health insurance premiums by $130, bringing that total to $1,775 per person per month. The district's initial offer did not include a proposal for the union's health insurance. The district said it was still trying to gather more data to inform its proposal.

Jim Anderson, district chief financial officer, said the additional pay and benefits requested by the union would total about $23.2 million in added costs next school year.

"It's certainly a significant amount of money," he said. To come up with the money, he said, the district would have to cut 200 to 250 positions.

In its proposal, the union has further asked for new language in the contract that would address an array of issues, including limiting the number of new programs implemented each year and giving teachers more control over classroom decisions.

Starr Marsett, Anchorage School Board president, said she believed the district could do a better job making sure its teachers know they are valued, trusted and appreciated.

"We have to communicate," she said. "We have to build relationships with our teachers."

But when it comes to larger class sizes, the retirement system or raises, she said teachers need to also take their messages to lawmakers in Juneau.

"Until we get funding that supports education, it's going to be hard to do the things we do to support our teachers," she said. "Our hands are just tied."

Alaska schools still do not know for sure how much funding they'll receive next school year.

Gov. Bill Walker signed a two-year education funding bill into law last week that included no funding increases next school year and a one-time, $30 million boost the year after if the Legislature passed a Permanent Fund plan, which it did Tuesday.

A separate bill to boost Alaska's per-student spending formula has passed the House but is currently stuck in the Senate, as lawmakers enter the final days of this year's legislative session.

After the rally outside Monday, teachers filed into the 7 p.m. Anchorage School Board meeting, packing it to capacity.

The three board members elected in April were sworn in: Alisha Hilde (who replaces Kathleen Plunkett), Deena Mitchell (who replaces Tam Agosti-Gisler) and incumbent Elisa Snelling. The board elected Marsett as its new president and Mitchell as its new vice president.

Then the board heard public testimony for about two hours, many of it from educators. Some told the board they were fed up. Some said they had never seen teacher morale so low. A few said they would not return to the school district next year, including Brinna Langford.

"What you're seeing tonight is not new," she told the board. "But we, like so many other districts in the nation, are reaching a breaking point. What you do with it is up to you, but I certainly hope you choose to stand up for your employees. That is the only way you can stand up for our students and Alaska's future."

Allison Stengel, a teacher at Begich Middle School, told the board she taught 100 students last school year. That jumped to 125 this year. Next year, she expects to have at least 150 students.

"I teach my students that they will be successful in life if they work hard and live up to their potential. I encourage them to look forward to a future where their hard work will pay off. I challenge them to demand what's right in the world and never to settle for less," she said. "Yet, I stand in front of them a hypocrite. I'm overworked, underappreciated and underpaid. My colleagues and I have learned that the burden does in fact increase even when we don't think it's possible."

Marsett said the board planned to hold a closed-door meeting next week to discuss the contract negotiations.

"We are taking it very seriously and we are calling a special meeting so we can spend more time to discuss this and give the district guidance," she said.