After spending days aground in Sitka, a sea lion returns to the water – with help from humans 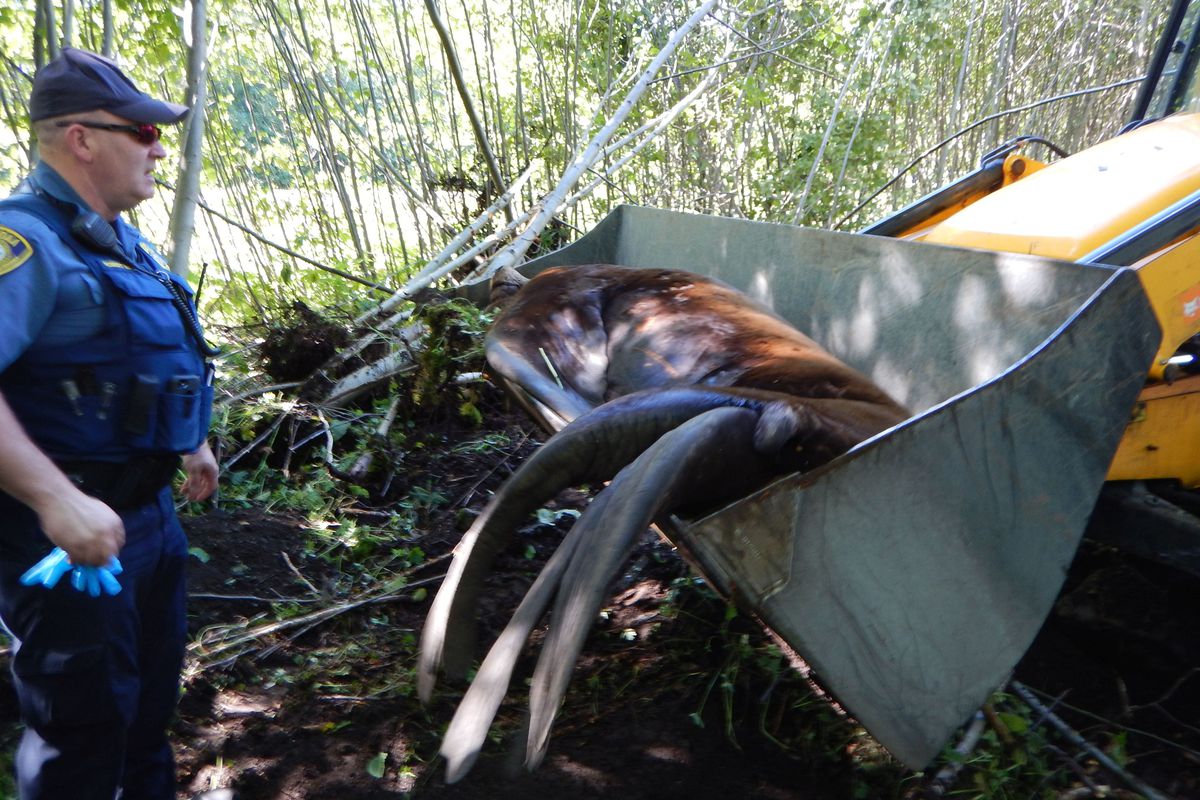 A sea lion that had been on land in Sitka for four days was transported in a front-end loader back to water after being darted, Sept. 3, 2018. (NOAA photo)

A sea lion that had been on land in Sitka for four days was transported in a front-end loader back to water after being darted, Sept. 3, 2018. (NOAA photo)

An improvised rescue mission involving a front-end loader and tranquilizer darts returned a desperate and dehydrated sea lion that spent four days meandering around Sitka to the ocean Monday.

"It's a good outcome," said Julie Speegle of the National Oceanic Atmospheric Administration. "He was last seen catching a fish."

The four-day misadventure appears to be a one of a kind event for a Steller sea lion in Alaska: Scientists say they don't know of any other similar instances of a sea lion hauling out in a populated area for days in Alaska.

First seen humping down a road near Sitka's hospital early Friday morning, the Steller sea lion had spent most of the past two days hiding in the woods. Scientists tried to encourage him to travel the quarter-mile to the ocean on his own, but those attempts failed.

By Monday, things were getting desperate.

Sea lions can haul out on rookeries for days "with no problem" said Kim Raum-Suryan of NOAA's protected resources division. But the sea lion was stressed and had no access to water beyond mud puddles, she said.

[Earlier: After 3 days, 'stressed' sea lion that ventured into Sitka can't find its way back to the ocean]

Finally, the scientists decided that it would be safest to sedate the sea lion and put in place a rescue mission that involved marine mammal experts as well as volunteers from the Southeast Alaska Regional Health Consortium and other agencies.

Volunteers from SEARHC with a front-end loader pushed down trees in a stand of alder to clear a path to the sea lion. Then, at about 1 p.m. Monday, a NOAA veterinarian darted the sea lion, who was resting in the alders, Raum-Suryan said.

Once they were confident the more than 1,500 pound animal was asleep, the rescuers gently rolled the sleeping sea lion into the bucket of the front-end loader, and from there into the back of a flatbed truck.

Officials dotted the animal with pink paint on his head and used Clairol hair dye to mark a number on his side to allow for tracking after release, she said. They hope to answer the "million dollar question," said Raum-Suryan: Why did the animal end up on a Sitka road in the middle of the night?

The animal's misadventure over, he was given sedation reversal drugs. When he woke, he swam away, Raum-Suryan said. The sea lion was later spotted swimming in the harbor area.

"We're hoping if he's healthy he'll go off and be a regular sea lion again," she said.