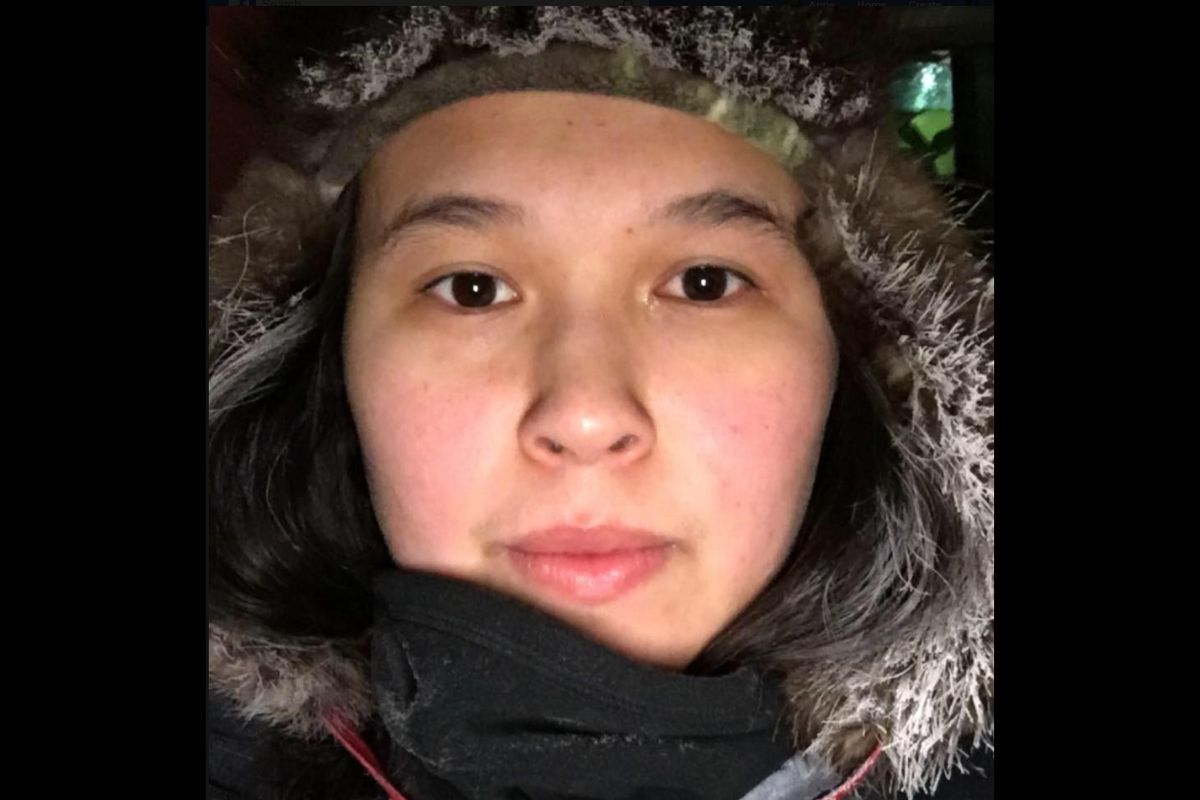 Deidre Levi, 21, says she was sexually assaulted Aug. 2, 2018, in Nome. She said she received support from across Alaska after telling her story on Facebook. (Photo provided by Deidre Levi)

Deidre Levi, 21, says she was sexually assaulted Aug. 2, 2018, in Nome. She said she received support from across Alaska after telling her story on Facebook. (Photo provided by Deidre Levi)

She is 21 years old. She says he wasn't the first man to rape her and get away with it.

First there was the man who sexually abused her in grade school. The visits to his shed finally stopped when he moved away from her Norton Sound hometown of St. Michael. Then there was the man two years ago in a Unalakleet apartment. Troopers talked about investigating that case, she said, but nothing ever happened.

Her name is Deidre Levi and she wants you to know her story.

The latest attack, she says, came during a visit to Nome on Aug. 2. She woke at a friend's house to find a young man she barely knew on top of her. "He was inside of me. He was raping me."

This time she is determined to hold the man — and the police — accountable. She wants this third man to be the last.

As a new police chief and city manager take office in Nome, Levi is the second Alaska Native woman in recent weeks to publicly raise questions about the city's willingness and ability to pursue rape investigations.

The story of Nome 911 dispatcher Clarice "Bun" Hardy, who says police colleagues ignored her when she reported being raped and filmed in early 2017, inspired Levi to share a similar experience.

"I read how the police department didn't give her justice, I didn't want that same thing to happen to me," Levi said.

She wrote a moment-by-moment account of the alleged assault and posted it to Facebook. Messages filled her inbox from women across Alaska. Women in Seattle. Texas. New York.

While the Brett Kavanaugh Supreme Court nomination hearings have become a flashpoint for national conversations about sexual assault and gender politics, and the murder of a 10-year-old girl in Kotzebue underscored staggering rates of sexual violence in Alaska, a different discussion has been simmering for years in Nome.

A support group of 11 victims advocates brought a resolution to the Nome City Council in May, describing a local justice system that sometimes appears to focus on whether a woman was drinking, not whether she was raped.

"Alaska Native victims in Nome can be heard asking, 'Why tell a system that is going to blame the victim by asking questions like, 'What were you wearing? Were you drinking? Why did you go to that bar?'" the resolution says.

When women report rape and violent crime to police, those complaints often do not lead to prosecution, the group said. It said victims are not informed of the status of their cases, are unaware if police have opened investigations in response to their reports and "are unaware if their rape kits have been sent to the state crime lab for testing."

[This story is part of ongoing Daily News reporting on sexual abuse in Alaska. If you have a story to share, or believe there is information we should know about a person or case, please fill out this confidential form.]

In mid-August, a town hall meeting on sexual assault investigations explored questions of police policies and training. City Manager Tom Moran announced his resignation the next month amid a drumbeat of embarrassing headlines, including the decision to re-hire a community service officer who pleaded guilty to punching a homeless woman. A new police chief, Robert Estes, began work Sept. 15.

Hardy and Levi are waiting to see if charges are filed against the men who they say raped them. At first, Levi hadn't planned on telling police about the alleged attack.

'Are you going to tell anybody?'

While staying in Unalakleet for a summer job at the fish plant, Levi met another visitor to the windy coastal village. One night he invited her over for a homemade pasta dinner, she said. She hadn't eaten yet and agreed to visit.

"As soon I walked into his apartment, I noticed that he did not cook and there was no spaghetti," she said. "That's when I realized what was happening to me or what was about to happen to me."

The man raped her, she said. She cried in his bed as he slept.

As she looked for her clothes, she remembers him asking if she was going to tell anybody.

In that case, Levi said she told a supervisor at work. There was an interview with a trooper in Nome. The investigator started his questioning sitting down and finished standing up.

"That was the first and last time I heard (from) them," she said.

The out-of-towner — Levi never learned his last name — was not charged with a crime. A spokeswoman for the company the man worked for said the business was not aware of any criminal complaints made against him.

Returning to St. Michael, she isolated herself. Watching movies and making beaver fur mittens at home instead of going to play basketball at open gym. Life became a loop of work, lying in bed, work.

"I don't know how to talk to people," Levi said.

This fall, she made the 45-minute plane ride to Nome. Her older sister got a job as a counselor and had a weeklong orientation in the Northwest Alaska hub city of 3,800.

Levi spent the days baby-sitting her infant niece. On the night of Aug. 2, a Thursday, she visited the home of an old friend. Two other women stopped by. Everyone drank.

A young man appeared and one of the women gave him a haircut, Levi said. She knew of him but they had never spoken. At one point, some of the group piled into a car to get dinner at a local restaurant.

"That was the last thing I remember," Levi said. "The next time I was conscious, I was in that same house. I was in a bedroom."

The man did not respond to Daily News interview requests. Under Alaska law, having sex with someone who is incapacitated and unable to consent is felony sexual assault.

Levi said she soon passed out or fell asleep again. When she came to, she was in the living room of the same home. The man was on top of her, pulling off her shorts and underwear.

Levi blacked out once more. The next morning, it was still dark when she left the house. Disoriented, she walked in search of her hotel wearing shorts and a thin jacket.

A friend picked her up and drove her to the emergency room. At the hospital, Levi found that she couldn't stop screaming.

[911 dispatcher: I was raped and Nome police colleagues ignored the case]

'I was scared of falling asleep'

"I had to take an anxiety pill (provided by a nurse) just so I could get the exam done," Levi said. But she had taken the medication before — she knew it might make her sleepy and refused to take the pill until a family friend arrived.

"I was scared of falling asleep. I was afraid that I would wake up and he was raping me," Levi said.

A policeman listened to her story. It was the same investigator that Bun Hardy, the police dispatcher, first reported her rape to in 2017. The department had demoted him in June from the rank of lieutenant to sergeant, with a decrease in pay. City officials declined to say why the lieutenant was demoted but in a public service announcement said an audit of police department investigations resulted in "disciplinary action" for employees.

"He had told me that this was a very strong case and I had a lot of evidence," Levi said. "They took my clothes. They took pictures of the scratches and bruises and bite marks on my body."

"They have not contacted me once. That was the first and last time I heard from the Nome Police Department," Levi said in a Sept. 27 interview.

In the days following that interview, as the Facebook post describing the alleged attack circulated in Alaska and beyond, Levi said she received a call from a police department employee apologizing for how the case has been handled.

"I think Bun Hardy broke that glass ceiling for women all over (Alaska)," she said. "Because a lot of girls tell me, because of my story. They are starting to open up. And they are telling their stories for the very first time."

A transplant from a small Virginia town, Nome Police Chief Bob Estes has been on the job for less than three weeks, replacing former Chief John Papasodora. While he said he cannot talk in detail about ongoing criminal investigations, Estes pledged that sexual assault cases would be investigated "completely and thoroughly."

He said he could not "confirm or deny" that someone from the city called Levi to apologize. In the meantime, Nome is searching for a new city manager, with former Mayor John Handeland expected to fill an interim role beginning Oct. 16.

"I have full confidence in (Police Chief Estes) that he will be responsive to any of these issues that are raised," Handeland said of the sexual assault cases.

Levi said she hasn't been able to keep up with the outpouring of support she received following her Facebook posts, which describe the alleged rape on her personal profile and on a closed regional group called Nome Rant.

Yet going public comes at a cost, said Panganga Pungowiyi, a Nome resident and victim advocate who has sought changes to police policies.

As for promises from new city leaders, Pungowiyi said it remains to be seen if the police department's plans to improve investigative policies lead to true safeguards for victims and accountability for offenders.

"Obviously it's not something that is isolated to Nome. It's across the U.S. Indigenous women have higher rates of risk to be sexually assaulted. And a lot of times the people who assault are non-Native and the prosecution rate is really low."

Alaska's sexual assault rate is three times the national average. Within the state, rates are highest in the Western Alaska region that includes Nome and surrounding communities as well as the Yukon-Kuskokwim Delta and Aleutians.

Alaska Natives represent 15 percent of the population but make up more than half of sexual-assault victims.

Bun Hardy and Levi said city leaders have been apologetic about how their cases were handled. The Nome district attorney was moose hunting this week and unavailable for comment, a colleague said.

As of Wednesday, no charges had been filed against the men named by Hardy and Levi. Both women said they found comfort and strength in talking to others who say they have been sexually assaulted.

"In the beginning I felt so alone," Hardy said. "Now I feel like there's an army behind me."