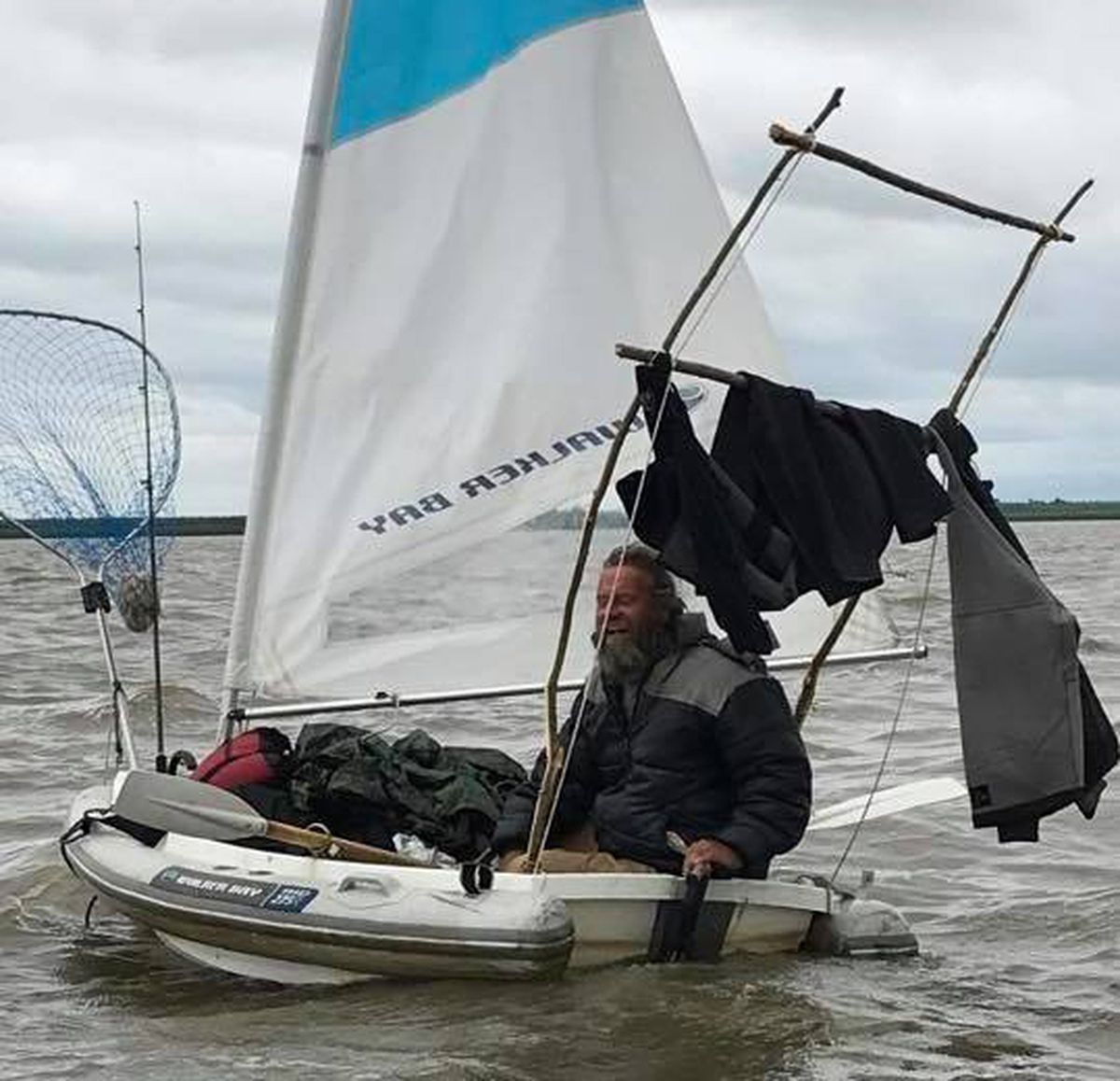 John Martin III set out last summer to sail from Alaska to China alone in an 8-foot dinghy, a plan that sounded crazy to everyone but him.

To the surprise of many, Martin, a homeless activist who once camped out for months on the sidewalk outside Anchorage City Hall, made it as far as Russia, washing up on the Siberian coast in August.

The 45-year-old has been detained there for the past four months. Now Russian authorities are trying to deport him — but he has to find the money to get home.

Martin left Alaska in July, planning to sail down the Yukon River and across the Bering Sea in a tiny boat equipped with little more than a bucket of salmon bellies, a jug of grape juice and water, pilot bread and a compass, he said in a recent phone interview.

He had a rough plan to sail until he hit Asia and then hug the coastline until he was near a sliver of Chinese territory between Russia and North Korea. There, he planned to beach himself and ask to be let into China to be reunited with a wife and child he has not seen for more than a decade.

“I had hoped I may be able to appeal to them to let me stay,” Martin said on a scratchy cellphone connection from the Siberian hospital where he has been detained. “I think sometimes a desperate act can open a door.”

But he was blown off course and, dehydrated, landed on the remote Chukotka Peninsula locality of Lavrentiya in search of water in August. The U.S. Coast Guard is still wondering how Martin made the trip of several hundred nautical miles in a boat more suited for a Midwestern lake than one of the most treacherous patches of ocean in the world.

“There was definitely a hell of a lot of luck involved for him,” said Paul Webb, a civilian employee of the Coast Guard in Alaska who coordinates Bering Sea rescues.

It was another strange chapter for Martin, who has for many years been a fringe public figure in Anchorage.

In 1995, Martin was charged with having sex with a 15-year-old foster child he and his then-wife had taken in. He was 23 at the time and spent eight years in prison. Afterward, he and his wife divorced, and Martin says he lost contact with his three children.

In 2011, he made headlines for his monthslong sidewalk protest at City Hall over the city’s policy of clearing personal belongings from homeless camps. He also stoked a public feud with then-Mayor Dan Sullivan, who said he wouldn’t meet with Martin to discuss homelessness policy because Martin is a sex offender.

He was also tried twice for manslaughter in the death of his girlfriend in a rollover crash on the Seward Highway, in which Martin was driving and had been drinking.

Depending on whom you ask, he is either a flawed but sincerely religious man who has thrown his fate into the hands of God, or an extremely lucky person who is suffering from delusions that cause him to take serious risks.

Martin has a long history of putting himself in danger, from long wilderness journeys to homeless camps, said his friend Brian Schaffer, a former Anchorage pastor who met Martin during his protest days.

Martin decided to sail to China to reunite with a wife and son he says are waiting for him in an industrial city in Guangdong province.

Martin, raised on the Kenai Peninsula, first got to know the woman while chatting with her on an early Chinese messaging computer program, he said. He traveled to meet her, and in 2007 they married and had a son, he said.

The family was living together in Guangdong province, a manufacturing hub, when Martin’s criminal history caught up with him. While he was in China, the U.S. revoked his passport because he was behind on child support payments for the children he has with his first wife, he says. Martin says because of his sex offense, he wasn’t allowed to bring his Chinese wife and son to the United States.

Martin returned to Anchorage and became religious, eventually abandoning his job at an acupuncture practice to live outdoors, he said. It was around then when he began his protest in front of City Hall.

Martin says he held on to the idea of getting back to his family in China. With no passport, he couldn’t fly. In April 2011, he says, he tried to walk. He planned to travel from Anchorage to Iliamna, eventually heading north on a route he imagined would cross a frozen Bering Strait. Worried friends reported him missing to the Anchorage Police Department, which released a missing-person bulletin.

“Martin had told a friend that he planned on walking barefoot to Iliamna from Anchorage along with his 6-month-old dog,” the statement said. “Martin had no provisions for himself or the dog and told the friend he intended to live off the land.”

He claims he made it to Tyonek with injured feet.

In 2014, he was in a rollover car crash on the Seward Highway with Margie Thompson, a woman he’d been living with. She was killed. Martin had a blood alcohol content of 0.12, above the legal limit. He went on trial twice for manslaughter, with an expert testifying for the defense that he had an IQ of 135 — borderline genius range — and also a possible brain injury. Both times, the jury couldn’t reach a verdict. Martin eventually pleaded guilty to a misdemeanor.

‘The most unlikely boat’

He moved back in with his mother and again began to fixate on getting to China. His son was 11 and didn’t speak English. Martin says he felt he had a narrowing chance to be part of the boy’s childhood.

This summer, Martin bought an 8-foot Walker Bay sailing dinghy and had a friend drive him to Nenana, where he put his boat in the Tanana River. He planned to float to where it joins with the Yukon River and follow it to the Bering Sea.

He stopped to resupply in Emmonak, the last village before the Yukon empties into the ocean.

Jack Schultheis, the manager of the Kwikpac Fisheries processing plant there, has met many of the adventurers who pass through the village. Martin’s tiny craft was stuffed with fish hooks, twine, duct tape, a book about the Bible, a blue tarp, a blanket and a homemade fish drying rack. It looked like the 6-foot-2 Martin could barely fit.

“It was just the most unlikely boat,” Schultheis said.

Martin disclosed his plan to sail to China. Schultheis thought Martin was crazy and warned him against the journey.

Gordon Westlock Jr., a summer employee of the fish plant, helped Martin push his boat into the river the day he set out for the ocean.

“I was thinking about him every day,” Westlock said. “Wondering if he was alive out there.”

The first 11 days at sea were rapturous and calm, Martin says. He encountered whales, seabirds and wide skies. He ate crackers and salmon bellies and drank watered-down grape juice.

“I had the freedom to sing and pray without any thought of who is around me,” he said. “It was quite nice in that way.”

Then the wind cut out. The boat drifted to the north instead of south as he had intended, propelled by ocean currents.

Martin believes he saw the Diomede Islands. He had planned to collect rain in a tarp and vinyl shower curtain, but none had fallen. He started to ration his water. By the time he saw coastline, dusted with patches of snow, he was getting thirsty, he said.

Wind kicked up as he came to shore, and Martin and his boat were thrashed by the surf. He set foot on a new land soaked and chilled.

According to a translated Russian court document, Martin washed ashore on a cape south of Lavrentiya, a tiny rural settlement on the Bering Strait, just south of the Diomede Islands.

By his count, he had been at sea for about two weeks.

Staggering out of the surf, Martin saw signs of a small village.

“I could smell smoked salmon,” Martin said. “I knew if there was smoke in the air, people would be there.”

He says a Chukotka family took him into their cabin, dried his clothes and fed him, and called Russian authorities. The Russian authorities flew Martin to Anadyr, the administrative capital of the sparsely populated Chukotka region, and charged him with entering the country without travel documents.

In lieu of jail, he was taken to a hospital. He was allowed to stay there for the next 3 1/2 months. For most of that time, a series of Russian border guards watched over him 24 hours a day.

Charges against Martin were dropped. The guards left and he was allowed to wander the industrial city, known for its brightly painted Soviet apartment blocks. He passed time feeding bread to pigeons, giving impromptu English lessons in a coffee shop and writing, he said.

This week, Russian authorities told him he was being deported, but he had to pay his own way home, and he’s broke. For now, he’s been taken in by the family of a man he met in a restaurant.

Martin’s plan is to write a book that will touch the hearts of the public enough to raise money, he said, or get him entrance to China.

“I know God will provide,” he said.