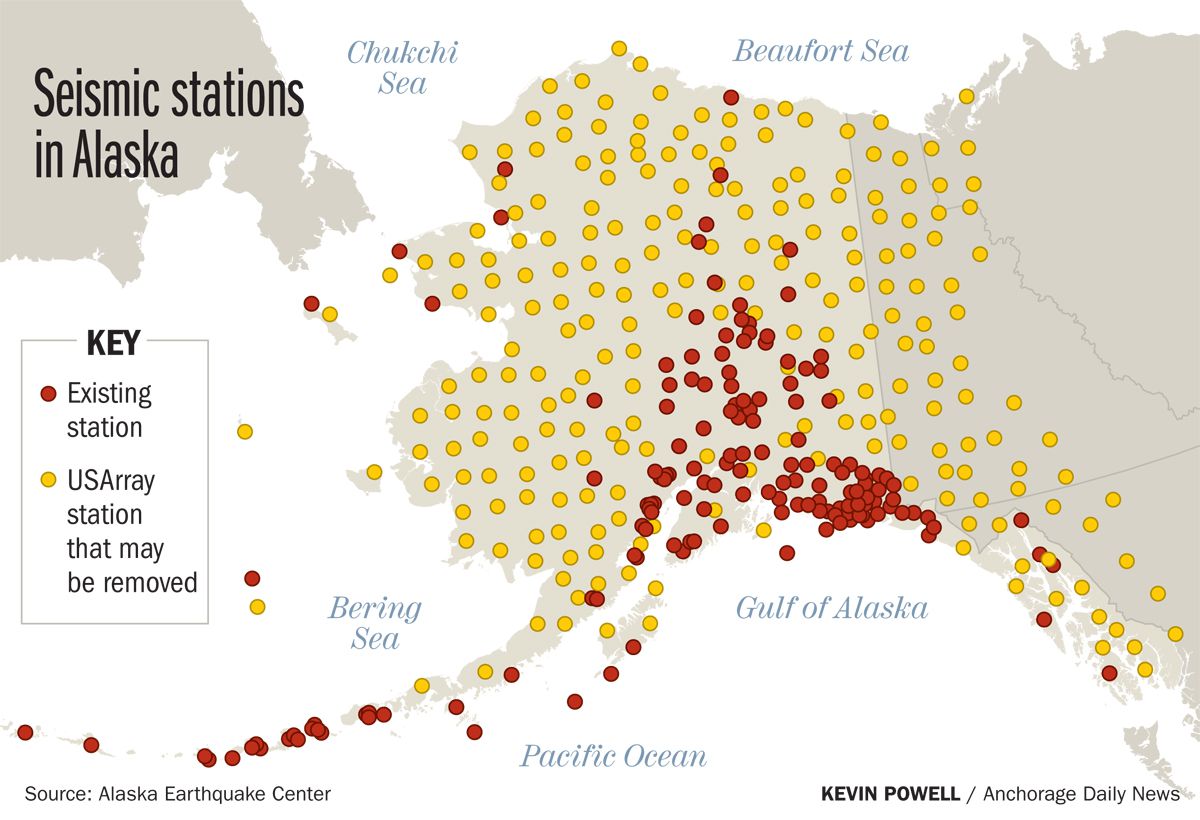 Alaska officials are working to keep in place a statewide seismic network that’s scheduled to be decommissioned next year but is vital for understanding earthquake and tsunami risks in the nation’s most seismically active state.

But West and others, with Anchorage’s magnitude 7.0 earthquake still fresh in mind, are pushing to keep at least 80 sensors.

“This has been a huge boon to our operation,” West said. “Four of every five big earthquakes in the U.S. happen in Alaska, but compared to other places, we are poorly instrumented."

Sen. Lisa Murkowski “strongly supports” the idea and is taking steps to ensure many of the stations remain in Alaska, said Karina Borger, a spokeswoman for the senator.

The temporary stations, largely installed in 2016 and 2017, are part of the USArray project that traveled across the Lower 48, creating CAT scan-like images deep beneath the continent.

Alaska was the last stop.

The seismic stations were a “game-changer” in Alaska, said West, head of the Alaska Earthquake Center at the University of Alaska Fairbanks. They created a quake-monitoring web, filling in “Montana-sized” gaps that had existed in much of the state.

The federal sensors supplemented the state system — consisting of about 150 sensors limited to Southcentral Alaska and the Railbelt — and allowed scientists to pinpoint the depth, orientation and footprints of the most remote quakes.

The system has proven vital in tracking unusual events, such as a 6.4 quake in northeast Alaska and a 7.9 quake off the coast of Kodiak, both striking in 2018.

“Without the USArray, some of those far-flung earthquakes would be like listening to thunder over the horizon,” West said. “You know it’s over there, but you don’t really know what happened.”

Keeping the stations will help improve the accuracy of tsunami warnings, West said.

They also can be a precursor to a statewide earthquake warning system such as the one being rolled out in California, he said. That could one day give Alaskans several seconds of warning before a quake strikes.

“It’s fair to say that Alaska is conspicuously absent from the earthquake early warning system discussions in this country in large part because we don’t have the infrastructure to support it," West said.

“It helps us better understand where faults are, and forecast the size of earthquakes and where they might be, so we can better provide for the safety of infrastructure and people in the regions,” Strait said.

West said the University of Alaska seeks $5 million in state funding to keep many of the USArray sensors in Alaska. It’s the university’s lone capital budget request for research, a sign of its value, he said.

The state money could attract another $19 million in federal funding, helping cover operations and maintenance costs for five years, he said.

The National Science Foundation appears open to the idea, as long as it receives appropriate compensation, said Bob Woodward, with Incorporated Research Institutions for Seismology, the organization that installed the USArray sensors.

“Most of us in the science community would be delighted to see as many of them as possible continue to run (in Alaska),” he said.

Strait, with the seismic hazards commission, said the group supports the university’s request. This year, the commission will also target improvements to school safety and boosting training for post-quake structural inspections.

West said Alaska’s congressional delegation has helped lay the groundwork for keeping part of the system in Alaska. Murkowski helped secure funding that allowed the earthquake center to incorporate data from the USArray stations.

Multiple federal agencies are interested in the idea, West said. The sensors' additional benefits include detecting nuclear tests in foreign countries, and meteorological instruments on some stations improve weather forecasting.

“We have good reason to be optimistic there will be a significant federal contribution to this effort,” West said.