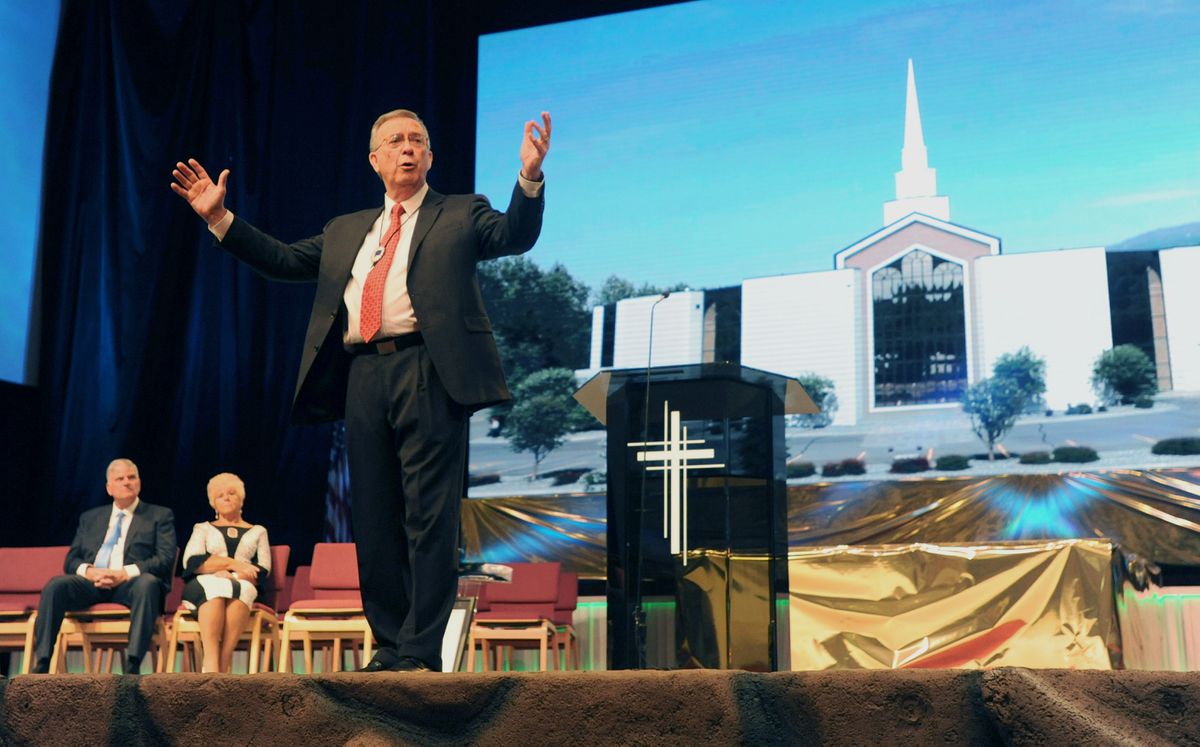 Rev. Jerry Prevo, 74, gives a sermon before retiring as pastor of the Anchorage Baptist Temple after more than 47 years of service on Sunday, May 5, 2019. Pastor Franklin Graham and Carol Prevo are seated at left. (Bill Roth / ADN)

Rev. Jerry Prevo, 74, gives a sermon before retiring as pastor of the Anchorage Baptist Temple after more than 47 years of service on Sunday, May 5, 2019. Pastor Franklin Graham and Carol Prevo are seated at left. (Bill Roth / ADN)

The Rev. Jerry Prevo, whose entrepreneurial Baptist evangelism and mixing of conservative politics and preaching made him a household name in Alaska, stepped down as pastor of the Anchorage Baptist Church on Sunday after 47 years at the pulpit.

Ron Hoffman, a longtime Anchorage Baptist Temple staff member who grew up in Anchorage, has been named as Prevo’s replacement.

Prevo’s farewell service drew thousands of attendees Sunday. They filled the Anchorage Baptist Temple’s cavernous auditorium to laud the career of a man most referred to simply as “Preacher.”

Jerry Prevo, raised in Signal Mountain, Tennessee, drove to Alaska in 1971 to work at a small church, after a fellow Baptist minister recruited him.

Prevo began expanding his congregation, buying a dozen buses to pick up children for Sunday services -- in hopes of gaining their parents as congregants too.

The church expanded rapidly. By the mid-1970s, the church had bought land for the familiar white-steepled building on the corner of Northern Lights Boulevard and Baxter Road. In 1992, a 43,000 square foot auditorium was completed.

Today, the Anchorage Baptist Temple church pulls in a diverse congregation of more than 2,000 people per week, on average. But it’s no longer the largest church in Alaska by attendance.

ChangePoint Alaska, a nondenominational church that’s publicly apolitical, draws about a thousand more congregants to services per week, according to data from the Hartford Institute for Religious Research.

Prevo has also wielded significant influence in Republican political circles. On Sunday, Prevo said he’d met every president from Jimmy Carter to Donald Trump with the exception of Barack Obama.

Young tearfully told the audience that Prevo had “led him to Jesus Christ.” He presented Prevo with his often-worn bolo tie bearing an Alaska flag that was beaded by his first wife.

“This is personal,” he said.

Anchorage Baptist Temple today has $21 million in reserves and a portfolio of assets valued at $85 million, Franklin Graham, a pastor who is the son of prominent evangelist Billy Graham, told the congregation.

“Jerry Prevo is an incredible businessman,” he said.

The church voted Sunday to make Prevo a pastor emeritus, paying him a retirement salary with regular cost-of-living adjustments. The salary wasn’t disclosed.

In a phone interview, Prevo said he planned to stay involved with some aspects of the Anchorage Baptist Temple’s work, as well as Graham’s charity Samaritan’s Purse. But he also said he wanted to get out of the way of Hoffman, the new pastor.

Prevo and his wife Carol Prevo will remain in Alaska. Some “health issues” alluded to by Graham during the service are “nothing serious,” Prevo said.

Long a loud campaigner on what he called “moral political issues,” Prevo said he’d also consider getting more involved with fiscal issues, such as the Permanent Fund dividend and state budget. He ruled out running for office himself.

“Running for office takes a lot of energy,” he said.

Critics of Prevo’s vocal stands against rights for LGBTQ people welcomed his retirement.

Prevo’s influence waned as he used his platform to preach intolerance, said Christopher Constant, an Anchorage Assembly member and longtime activist who was one of the first openly gay elected officials in the city.

“The people of Anchorage don’t stand for that,” Constant said.

Prevo’s stands against gay rights didn’t go that far, and not for lack of trying, he said.

Today, there are three openly gay and lesbian members of the Anchorage Assembly, plus a youth representative, Constant pointed out. The city recently rejected a “bathroom bill” and has enshrined anti-discrimination protections for LGBTQ people.

Prevo, said that times may have changed but his views haven’t.

“We’ve just taken a Biblical stand on morality, all through the years,” he said.

“Young people these days, I don’t think they know what God says about it,” Prevo said. “Therefore, they are endorsing it.”

At the service Sunday, more than a few speakers referenced what Prevo called his greatest achievement: More than 40,000 “registered decisions to accept Jesus” connected to the Anchorage Baptist Temple.

At the end of his sermon, Prevo asked if anyone in the audience wanted to join them, casting the net for souls one last time from the pulpit of the Anchorage Baptist Church.