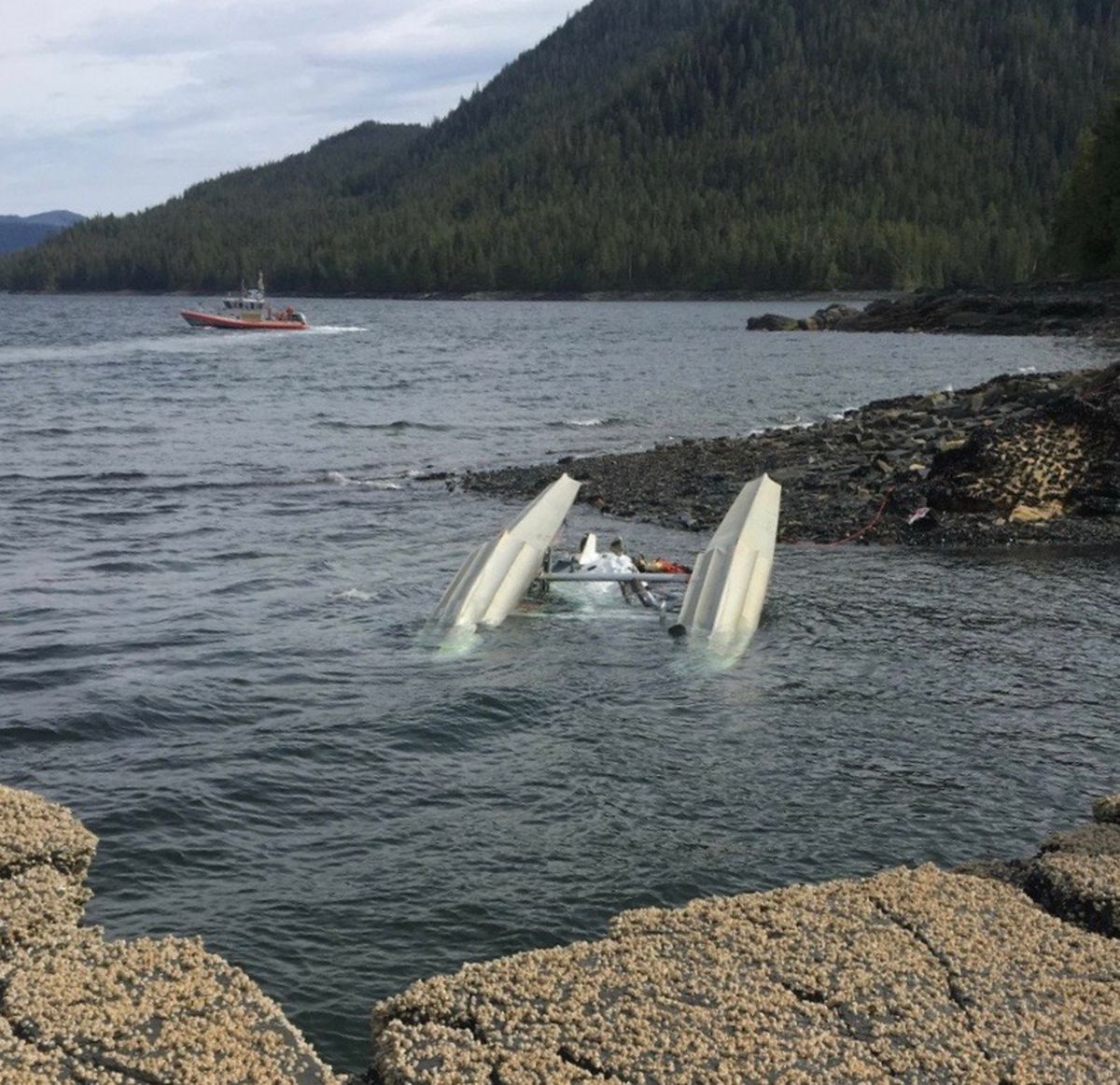 The remains of the last two missing passengers in Monday’s midair collision of two floatplanes in Southeast Alaska were recovered Tuesday, bringing the total number of dead to six.

A team of investigators from the National Transportation Safety Board arrived in Ketchikan to investigate the crash of the planes, which carried passengers from a cruise ship docked in Ketchikan.

The planes, with a total of 16 people aboard, collided Monday over George Inlet, about nine miles east of Ketchikan. Ten were rescued and are recovering. The remains of four passengers were recovered on Monday.

“Our community is heartbroken over this tragedy and its devastating impact on so many families," said Ketchikan Gateway Borough Mayor David Landis in the borough’s prepared statement. "There has been a tremendous outpouring of compassion and support from everywhere in the community, and we offer sincere gratitude to all those who are responding to the crashes.”

The National Transportation Safety Board sent a 14-member team of investigators to the Southeast Alaska city, spokesman Peter Knudson said. The group includes NTSB representatives from Washington, D.C., and Anchorage, as well as Denver and Wisconsin.

It also includes an NTSB board member, a fairly unusual occurrence that accompanies “significant media interest,” Knudson said. The story of the crash is attracting international attention.

Fourteen of the people involved in the collision — everyone except the two pilots — came off the Royal Princess, a megaship on an inaugural Alaska cruise and making a seven-day cruise.

All of them were on flightseeing trips.

The remains recovered Tuesday were both from the Beaver, said Chris John, with the Ketchikan Volunteer Rescue Squad. They were located in the woods not far from the water.

Taquan Air operated the Otter, which was flying a shore excursion sold through Princess Cruises. The flight was returning from a tour of the Misty Fjords National Monument and carried 10 guests, all Americans, from the Royal Princess and a pilot.

Jennifer Homendy, the NTSB board member, said after she arrived in Ketchikan that preliminary data shows both planes were inbound to Ketchikan when they struck each other at about 3,300 feet altitude, at 12:21 p.m., she said.

Investigators plan to recover the wreckage, speak with witnesses including the surviving pilot, and acquire additional data to determine “how the two planes came together,” she said. The team expects to be on the ground in Ketchikan for about a week.

She asked people to email witness@ntsb.gov with information about the crash.

Ketchikan residents mourned the loss of the pilot who flew the Beaver, Randy Sullivan, of Mountain Air Service.

He was a high school classmate, said Russell Thomas, a general manager with the George Inlet Lodge. The lodge served as a staging area on the west side of the inlet where boats brought injured passengers for pickup by ambulances.

“Our thoughts are with his wife, Julie, and their kids, as well as the entire Mountain Air Service team," Thomas said.

Monday night, commercial divers recovered the body of the passenger from the Otter who died, said Lt. Brian Dykens, a U.S. Coast Guard spokesman. The plane is submerged in about 80 feet of water, and largely intact, he said.

“This (deceased) individual appears to have had difficulty egressing the plane,” Dykens said.

Taquan Air suspended flights for a second day Tuesday, according to a spokesman working with the company.

No one answered a call to Mountain Air, a small company, on Tuesday. Sullivan flew four additional guests from Royal Princess in the Beaver, on an independent flight tour.

Both flight companies are based in Ketchikan.

The South Tongass Volunteer Fire Department was dispatched just before 1 p.m. Monday to what was initially reported as a boat crash in the inlet, the borough said. Rescuers didn’t discover the two planes down until about 20 minutes into the incident.

Four of the survivors were flown to Harborview Medical Center in Seattle on Monday night, starting at around 9:30 p.m., according to hospital spokesperson Susan Gregg.

Their injuries range from “arm fractures to ribs to spine to leg,” Gregg said. “Nobody’s in a life-threatening condition.”

By Wednesday morning, all four were in “satisfactory” condition, the hospital said: a 63-year-old woman and 61-year-old husband wife, as well as a 67-year-old man originally recovering in the intensive-care unit.

Six other survivors were admitted to PeaceHealth Ketchikan Medical Center, a spokesperson said. Three were released Tuesday, while three remained in “fair” condition.

The Ketchikan rescue squad photographed and cataloged aircraft parts in preparation before the NTSB investigators arrived, said Jerry Kiffer, an incident commander for the group.

Kiffer said the Beaver appears to have broken apart in the air, scattering wreckage across a large area. The debris field was about half a mile long and about 1,000 feet wide. Much of the field is on land.

The group’s volunteers located parts including the Beaver’s emergency location transmitter, a large chunk of the fuselage and personal items carried by those aboard.

Two divers with the group on Tuesday searched a large area, including the waters around the Beaver’s floats, engine and remaining part of the fuselage. The two sections of damaged fuselage were about 850 feet apart.

“(The divers) located some personal items but no indications of fatalities,” he said.

The Otter was located across the inlet, in saltwater, but close to shore.

On Monday, Kiffer, a medic, flew with others to that crash scene in a helicopter, after seeing no victims at the wreckage of the Beaver.

Four victims from the Otter were on shore, he said. A boat operated by Allen Marine Tours had already removed six other survivors with less serious injuries from the beach, ferrying them back to Ketchikan for medical help, he said. They all had made a “short swim” to the beach to await rescue, he said.

The Coast Guard and other Good Samaritan responders were already on scene.

“When we arrived ... everyone was very calm,” he said. “We had some injuries, broken bones, some lacerations, some back injuries. But everyone was reasonably calm.”

Princess said it activated a team of employees to assist the families impacted by the crash.

“All of us at Princess Cruises are deeply saddened by this tragic news and we are extending our full support to the investigating authorities as well as the traveling companions of the guests involved," Princess spokesman Brian O’Connor said in a statement.

The Royal Princess was delayed for 3.5 hours in Ketchikan. The ship arrived in Juneau on Tuesday.

Passenger Lyn Young, an Australian on her second cruise to Alaska, described a shocked, somber mood aboard the ship following word of the crash Monday night. Dinner was very quiet, Young said. Another passenger said she’d gone on a flightseeing tour just before the crash.

“The last thing you expect when you go away on holiday is to end up a statistic," she said.

A large number of agencies were involved in the search, including the Coast Guard, National Oceanic and Atmospheric Administration, U.S. Forest Service, Alaska State Troopers, Ketchikan rescue squad, and Temsco Helicopters, with the Ketchikan Fire Department and North Tongass Volunteer Fire Department helping to care for and transport patients.