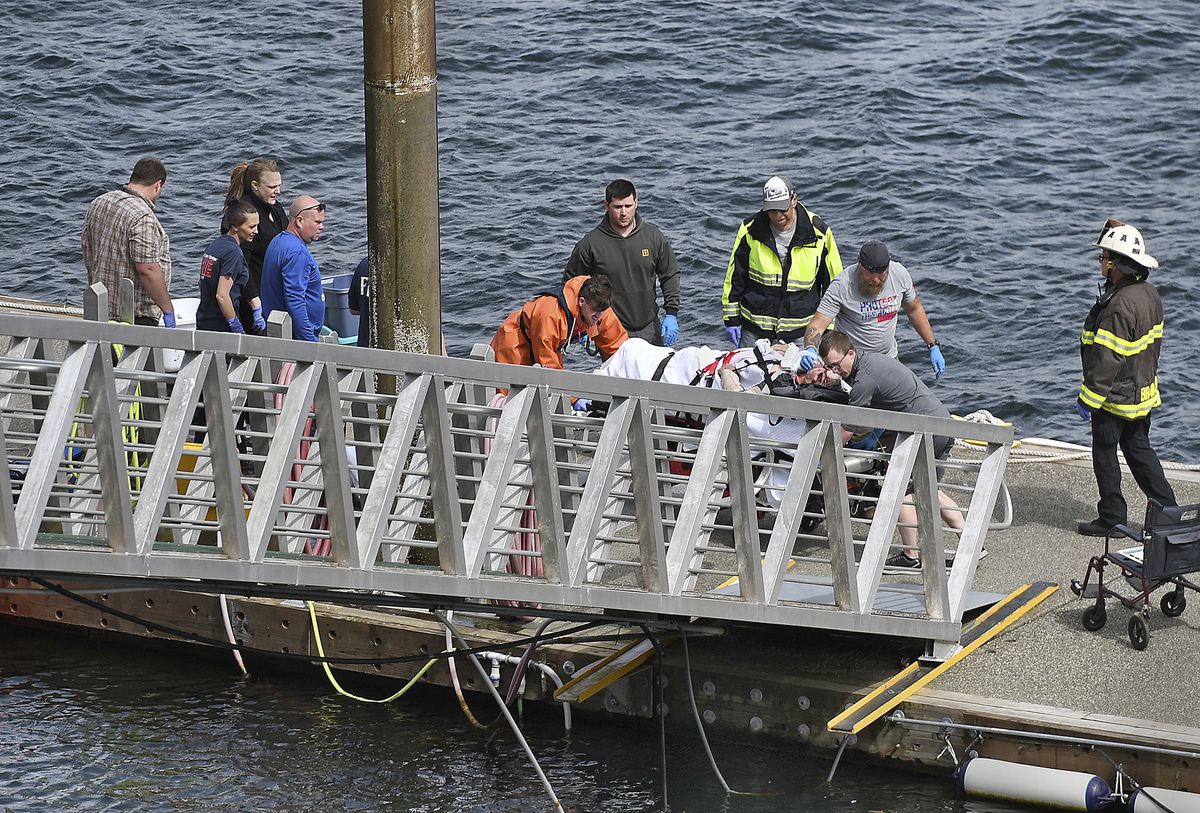 Emergency response crews transport an injured passenger to an ambulance at the George Inlet Lodge docks, Monday, May 13, 2019, in Ketchikan, Alaska. The passenger was from one of two floatplanes down in George Inlet early Monday afternoon and was dropped off by a U.S. Coast Guard 45-foot response boat. (Dustin Safranek/Ketchikan Daily News via AP)

Emergency response crews transport an injured passenger to an ambulance at the George Inlet Lodge docks, Monday, May 13, 2019, in Ketchikan, Alaska. The passenger was from one of two floatplanes down in George Inlet early Monday afternoon and was dropped off by a U.S. Coast Guard 45-foot response boat. (Dustin Safranek/Ketchikan Daily News via AP)

At least four people died when two floatplanes carrying passengers from the same cruise ship collided in midair over George Inlet near Ketchikan.

A Coast Guard update late Monday said that four people were confirmed dead and two were still missing. A search continued Monday evening for the missing.

A total of 16 people were on the two planes and 10 people were rescued, U.S. Coast Guard Petty Officer Jon-Paul Rios said. There were 11 people in one plane and five in the other.

Fourteen of the people involved came off the Royal Princess, a megaship on its inaugural Alaska cruise.

The de Havilland DHC-2 Beaver and de Havilland Otter DHC-3 collided in midair under unknown circumstances, according to the Federal Aviation Administration. Taquan Air operated the Otter, with 10 passengers and the pilot. The company flying the Beaver had not been identified as of Monday evening.

“The U.S. Coast Guard and local search and rescue teams have confirmed that nine of the guests and the pilot on the Taquan Air plane have been rescued and are receiving medical attention,” according to a statement from Taquan.

The condition of one passenger was “unknown” by Monday evening, Taquan said.

All of the passengers in both planes came off the Royal Princess, on a seven-day glacier cruise that was scheduled to arrive in Anchorage on Saturday, according to a statement from Princess.

The Taquan Air plane was returning from a Misty Fjords tour, the Princess statement said. A second plane was carrying four people from the ship on an independent tour.

Princess originally said Monday that five people were confirmed dead in the crash but appeared to back off that number in an emailed statement Tuesday morning.

“Authorities have confirmed there were three fatalities from the independent air tour recovered overnight, two guests and the pilot who were Americans. Rescue efforts continue for the other two guests, one Australian and one Canadian,” the statement said.

“Princess Cruises has activated members of its Care Team to provide assistance to the families impacted by today’s accident,” the company said in an earlier emailed statement.

“We are incredibly distressed by this situation, and our thoughts and prayers are with those onboard the planes and their families,” the company said. “Princess Cruises is extending its full support to traveling companions of the guests involved.”

“We have one in critical condition, three in serious condition, and six in fair condition,” she said.

She said she could not provide additional details.

Ketchikan-based Taquan said in a statement Monday it was operating the Otter that was involved in the accident about nine miles from Ketchikan.

“We are devastated by today’s incident and our hearts go out to our passengers and their families,” said the statement. “At this time, we are in the midst of an active crisis response, and our focus is on assisting these passengers, the pilot, our staff, their families and loved ones, and first responders.

The company has suspended all schedule flights and is cooperating fully with investigators, it said.

The crash is the second for a Taquan Air flightseeing plane in two years.

All 11 people aboard survived the crash of a Taquan flight into a mountainside near Ketchikan last summer, though six received serious injuries. Investigators found that pilot turned off a system meant to warn of looming terrain.

A pilot and eight cruise-ship passengers died in a 2015 crash in Misty Fjords that investigators later blamed on the pilot and the company’s lax safety culture. Promech Air operated that flight; Taquan bought Promech the next year.

The weather Monday afternoon in Ketchikan was partly sunny with 9 mph winds from the southeast and 10 miles of visibility, according to the National Weather Service.

Chris John, an incident commander with the Ketchikan Volunteer Rescue Squad, said it appeared the Beaver crashed on a steep rocky shoreline.

It ended up partially submerged in saltwater, upside down, near an area where Mahoney Lake flows into the inlet’s west side.

The Otter crashed about a mile away on the other side of the inlet, he said. It ended up in the water, said Lt. Brian Dykens, a Coast Guard spokesman in Juneau.

Volunteers from rescue group walked along the beach near the Beaver. Vessels searched the area from the water, John said.

All three of the area fire departments responded, according to Deanna Thomas, assistant manager for the Ketchikan Gateway Borough. Responders were staging at George Inlet Lodge about 10 miles from town.

NTSB investigators from Anchorage and Washington, D.C., are traveling to the scene Tuesday morning. An NTSB board member, Jennifer Homendy, will be part of the group, said Peter Knudson, a spokesman.

Correction: This story was updated to reflect the fact that Taquan Air bought Promech Air in 2016, a year after a Promech flightseeing plane crashed, killing nine people.