NTSB: Taquan Air floatplane that crashed in Metlakatla ‘cartwheeled’ as it landed 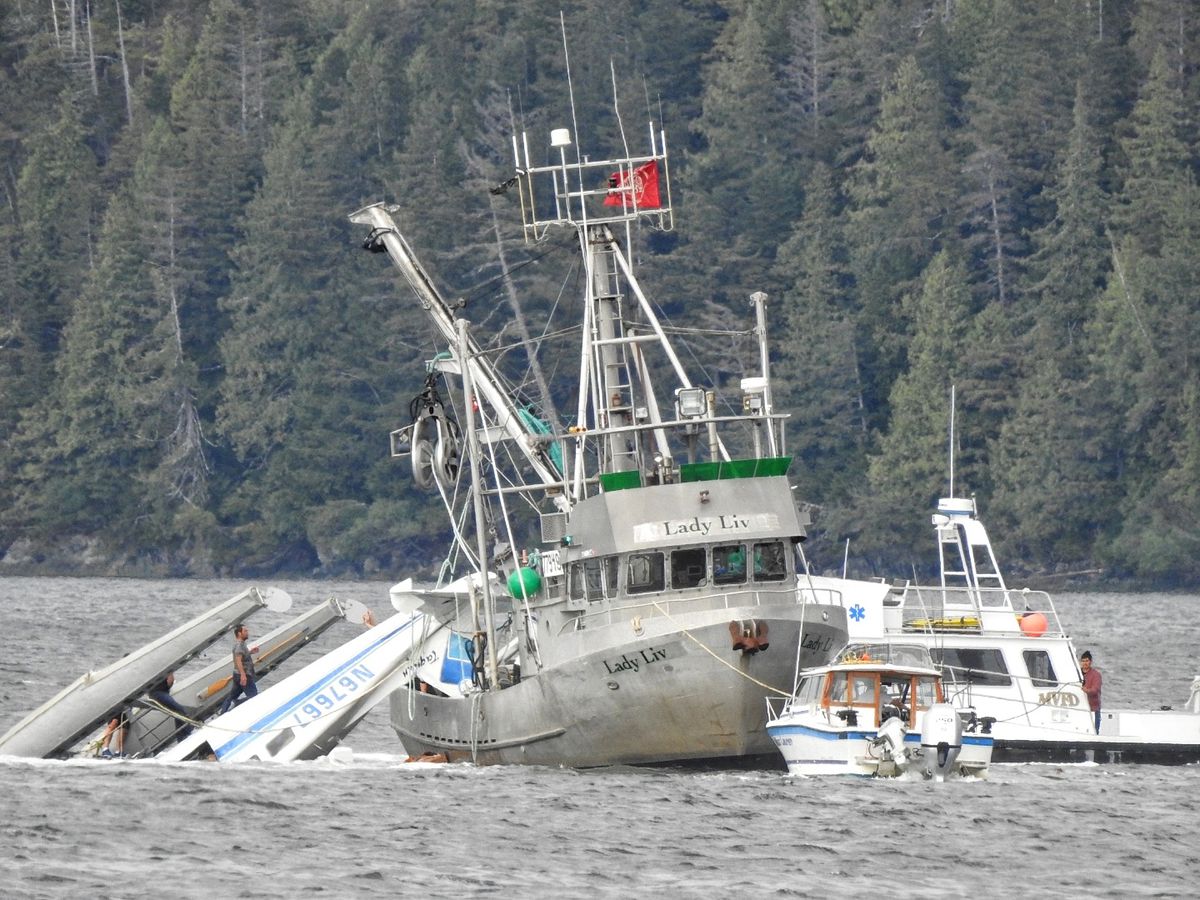 This Monday, May 20, 2019 photo provided by Aerial Leask shows good Samaritans off of fishing vessels attempting to bring in a floatplane that crashed in the harbor of Metlakatla, Alaska. Authorities say a pilot and a single passenger have died after the small plane crashed Monday near Ketchikan. (Aerial Leask via AP)

This Monday, May 20, 2019 photo provided by Aerial Leask shows good Samaritans off of fishing vessels attempting to bring in a floatplane that crashed in the harbor of Metlakatla, Alaska. Authorities say a pilot and a single passenger have died after the small plane crashed Monday near Ketchikan. (Aerial Leask via AP)

Witnesses said a Taquan Air floatplane “cartwheeled” after the tip of its float caught the seawater as it landed in Metlakatla on Monday, causing a crash that killed the pilot and the passenger, a federal investigator said Tuesday.

The right wing of the de Havilland DHC-2 Beaver then struck the water, apparently severing it, Clint Johnson, head of the National Transportation Safety Board in Alaska, said during a media briefing.

The plane came to rest in the water upside down, trapping the passenger and pilot inside, he said. The right wing is still at the bottom of the Metlakatla Harbor, though a search is underway to recover it.

The accident was the second in a week for Taquan Air. A de Havilland DHC-3 Otter floatplane owned by the airline collided with another floatplane in nearby Ketchikan, killing a pilot and five cruise ship passengers and injuring 10 on May 13. The company first suspended pre-booked flightseeing tours for cruise passengers, and then, on Tuesday, informed the FAA it would suspend all operations.

Taquan posted a statement to its website Tuesday evening saying its employees, passengers and their families are the company’s priority.

“As you can imagine the past 24 hours have been incredibly overwhelming and we are reeling from not only the incident yesterday, but also from last week,” the company said. “It’s been a really heavy and heartbreaking time for us.”

“We are grateful for your patience and the outpouring of community support and we will update you as soon as we have more information to share,” the statement said.

The pilot of the plane that crashed in Metlakatla was 51-year-old Ron Rash of Harrisburg, Pennsylvania, according to the Metlakatla Indian Community. The passenger was Sarah Luna, a 31-year-old epidemiologist from Anchorage, who was traveling as part of an Alaska Native Tribal Health Consortium diabetes team, the consortium said in a statement.

[‘Our prodigy’: Young epidemiologist killed in Southeast Alaska plane crash was on a trip to see patients]

The weather at the scene of the crash has been described as high overcast, with light, 13-knot winds out of the southeast and about 10 miles of visibility, Johnson said.

The flight was scheduled from Ketchikan and carried a “fair amount of cargo" en route to Metlakatla, where the pilot was to pick up another load of passengers waiting at the dock, according to Johnson.

Metlakatla is a community of about 1,400 people about 15 miles south of Ketchikan. Taquan makes regular 10-minute flights to Metlakatla from Ketchikan and is the largest commuter airline in the area.

Luna was traveling to see patients at ANTHC’s Annette Island Service Unit in the coming days, according to a Facebook post from administrators at the health care facility. Other medical teammates arrived on a different flight.

They and Anchorage-based coworkers “are grieving this sudden loss with us,” unit director Rachael Askren wrote. She also expressed condolences to the Taquan Air staff.

“They have suffered enormous loss in the last week, and we join with everyone in this region expressing sadness for the loss of their staff, and the family and friends left behind,” Askren wrote.

An NTSB investigator flew to Metlakatla from Anchorage on Tuesday. Two FAA officials are joining the on-site investigation. The NTSB is conducting separate investigations into the Taquan crashes.

A preliminary report on last week’s crash, and one for Monday’s accident, should both be available in the coming days, Johnson said.

A barge was sent to Annette Island to retrieve the floatplane, according to NTSB. The plane will be brought to a secure hangar in Ketchikan.

It was the first time in more than 20 years that Johnson could remember one flight service experiencing two fatal crashes in such a short time.

“We’ve had operators in a season that have had two accidents, maybe even three," he said. "But this close together, this is a very, very unique situation.”