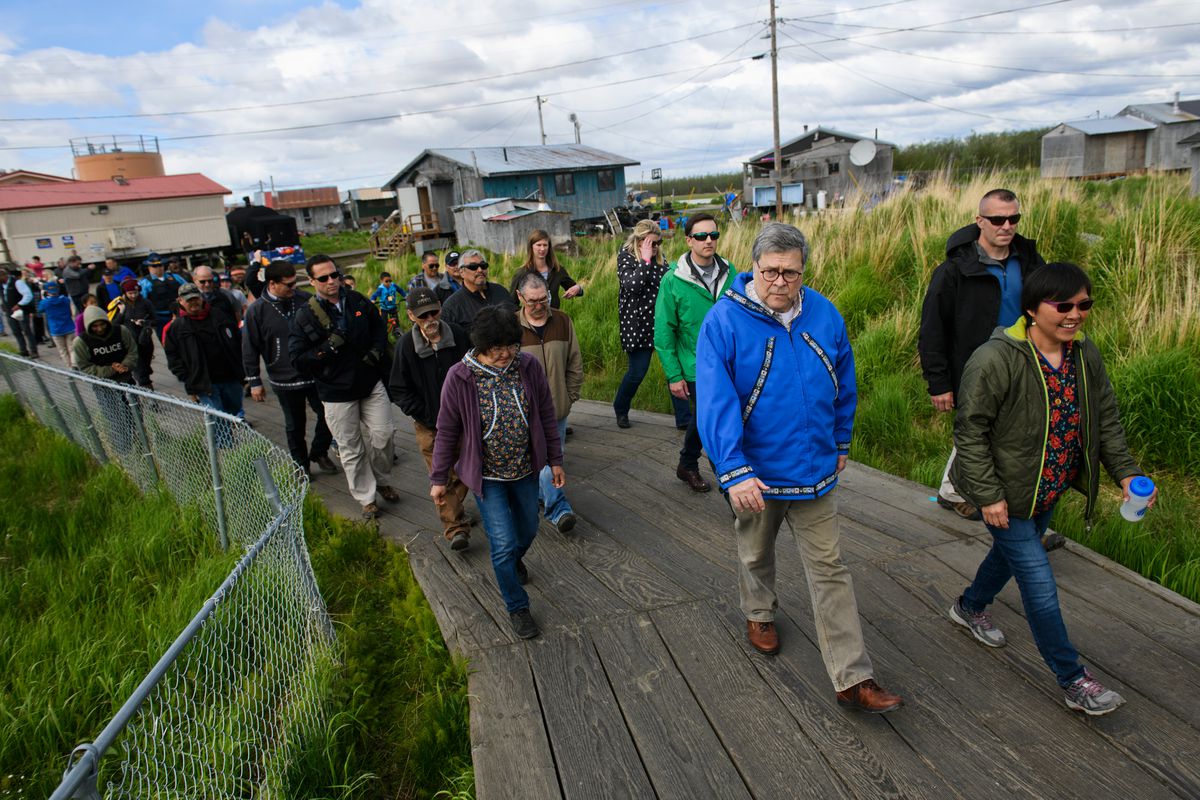 U.S. Attorney General William P. Barr declared an emergency for public safety in rural Alaska on Friday and announced that the Department of Justice will provide more than $10 million in emergency funds as part of a sweeping plan to support law enforcement in Alaska Native villages.

The department’s Emergency Federal Law Enforcement Assistance Program will immediately provide $6 million to the state to hire, equip and train rural police, and for mobile holding cells. Another $4.5 million will support 20 officer positions and be provided to Alaska Native organizations by the end of July.

The announcement comes a month after Barr visited Alaska during a multiday trip to hear concerns from Alaska Natives and rural residents about a lack of police in rural communities and high rates of sexual assault and family violence.

During a trip to a Western Alaska village in late May, Barr called the situation an “emergency” and vowed to do everything he could to help.

“In May, when I visited Alaska, I witnessed firsthand the complex, unique, and dire law enforcement challenges the state of Alaska and its remote Alaska Native communities are facing,” Barr said in a statement from the Department of Justice. “With this emergency declaration, I am directing resources where they are needed most and needed immediately, to support the local law enforcement response in Alaska Native communities, whose people are dealing with extremely high rates of violence.”

Kitka views Barr’s declaration and the scope of his plans as unprecedented, according to AFN spokesman Jeffry Silverman.

She has never seen anything like this in her lifetime, and views this as a real opportunity to make a difference, Silverman said.

Alaska has the highest per capita crime rate in the country, the Department of Justice statement said.

The unique circumstances of Alaska’s “jurisdictional landscape” and its hard-to-reach villages — some accessible to investigators only by boat or plane, contributing at times to lengthy delays into criminal investigations — factored into Barr’s decision.

The isolation of Alaska villages contributes to “law enforcement problems not seen anywhere else in our nation,” the statement said.

[Special report: One in three Alaska villages have no local police]

Barr said he was directing agencies with the Justice department to submit plans within 30 days on how they will provide more support for federal, state and tribal public safety efforts in rural Alaska. The goals must include providing better services to crime victims, stamping out illegal drugs, improving detention facilities and getting more police and legal resources to rural Alaska.

On top of those funds, two other agencies within the Department of Justice have identified $14 million that is available for child advocacy centers in Alaska and in the Lower 48.

“Lives depend on it, and we are committed to seeing a change in this unacceptable, daily reality for Alaska Native people,” Barr said.

During his visit to rural Alaska, Barr said he could not imagine a more vulnerable people than Alaska Natives with limited access to police, lawyers and courts.

In May, the Anchorage Daily News and ProPublica reported that one in three communities in Alaska, about 70 all together and nearly all of them Alaska Native, had no local law enforcement at some point this year. Many are in regions with the highest rates of poverty, sexual assault and suicide in the United States.

Barr said he would work closely with Native leaders and congressional and state representatives to ensure the programs are delivered effectively.

“I want to be sure that the support this department offers to Alaska Native communities will support solutions identified by the communities themselves,” he said. “The only way for us to provide effective support is to work in partnership with others. This is true in Alaska and throughout Indian country.”

Barr also announced a suite of funding opportunities and deadline extensions to programs that could support public safety in Alaska’s villages. Among the specifics:

• The Office on Violence Against Women will issue an award for sexual assault training and technical assistance in Alaska, including training community health aides in Alaska Native villages to perform sexual assault forensic exams and training for victim advocates.

• The Office for Victims of Crime will extend its application deadline for the Crime Victim Fund tribal set-aside solicitation. The money is part of the $167 million available to tribes for victim services this year to Aug. 16. This money can fund direct services and advocacy, domestic violence shelters, rape crisis services, children advocacy programs and elder abuse programs.

• The Office of Justice Program’s Bureau of Justice Assistance will extend an application deadline to July 15 for programs that target mental health issues, and drug addiction and re-entry initiatives.

Barr’s visit to Alaska at the end of May began with a roundtable meeting with Alaska Native leaders in Anchorage on May 29. The following day, he visited the state’s crime lab in the city, seeing firsthand the backlog into the processing of evidence of sex crimes.

He and a large entourage of officials flew to the rural communities of Galena, Bethel and Napaskiak on May 31. Tribal leaders in Napaskiak urged Barr to issue an emergency declaration.

U.S. Sens. Lisa Murkowski and Dan Sullivan had urged Barr to visit Alaska to see the problems firsthand. He complied and launched the Anchorage meeting with Native leaders by saying the nation’s attorney general must ensure the legal system works for every community in the country.

“I appreciate the urgency that the attorney general is placing on Alaska and our public safety situation and I look forward to working with him to further identify and implement lasting, systemic solutions to rural public safety and wellness in coordination with the Department of Justice,” she said.

Sullivan said Friday that he was struck by the swiftness and breadth of Barr’s plan. There’s been too much rhetoric and not enough action in past efforts to tackle the problem, he said.

Barr and his team truly listened to Alaskans, he said, and are committed to helping the people in the state who need it the most.

“I’m hopeful this will be an opportunity to really spur action,” Sullivan said.

The declaration and funding are “welcome news not only for the families that have been victims of crime, but also for the children of Alaska who deserve to grow up in neighborhoods that are safe and secure,” Young said.

Vivian Korthuis, chief executive for the Association of Village Council Presidents, providing social services to dozens of villages in Southwest Alaska, called the declaration “unprecedented,” according to the delegation’s statement.

“AVCP has asked for protection and safety of our families and tribal communities, and Attorney General William Barr has heard us,” Korthuis said. “We are not asking for anything less or anything more than any other community in Alaska or the United States.”

Bryan Schroder, the U.S. attorney for Alaska, told reporters Friday that the initiatives will bring additional resources to the state, including two assistant U.S. attorneys to support state prosecutors in rural areas.

Schroder will launch a working group to explore ways to reduce violent crime in rural Alaska, especially crimes against children. The group will provide a report to Barr in 30 days, he said.

The group will take input from Native leaders and others. One idea that will be considered calls for creating a regional public safety system led by tribal groups, similar to how health care is delivered to Alaska Natives, he said.

The discussion will include possible long-term sources of funding to support public safety in rural Alaska, he said.

She said the department’s admittedly lofty goal is putting a police officer in every Alaska village. It will involve multiple organizations working together.

“I’m not saying in any way we will meet that goal, but we will work toward it,” she said.

The governor’s reduction does not reduce the number of those officers because the program has been unable to hire enough officers to use its full budget.

The attorney general’s announcement, and the governor’s cuts, are completely unrelated, Shuckerow said.

The governor met with Barr during his visit to Alaska to address rural public safety and is working with rural stakeholders on the topic, Shuckerow said.

“To be clear, the governor is fully committed to providing the resources necessary for public safety,” Shuckerow said. “It’s one of the areas where he said we have to spend more.”

If the Legislature finds a way to repurpose funds for public safety in rural Alaska, the governor would be happy to consider their plan, Shuckerow said.