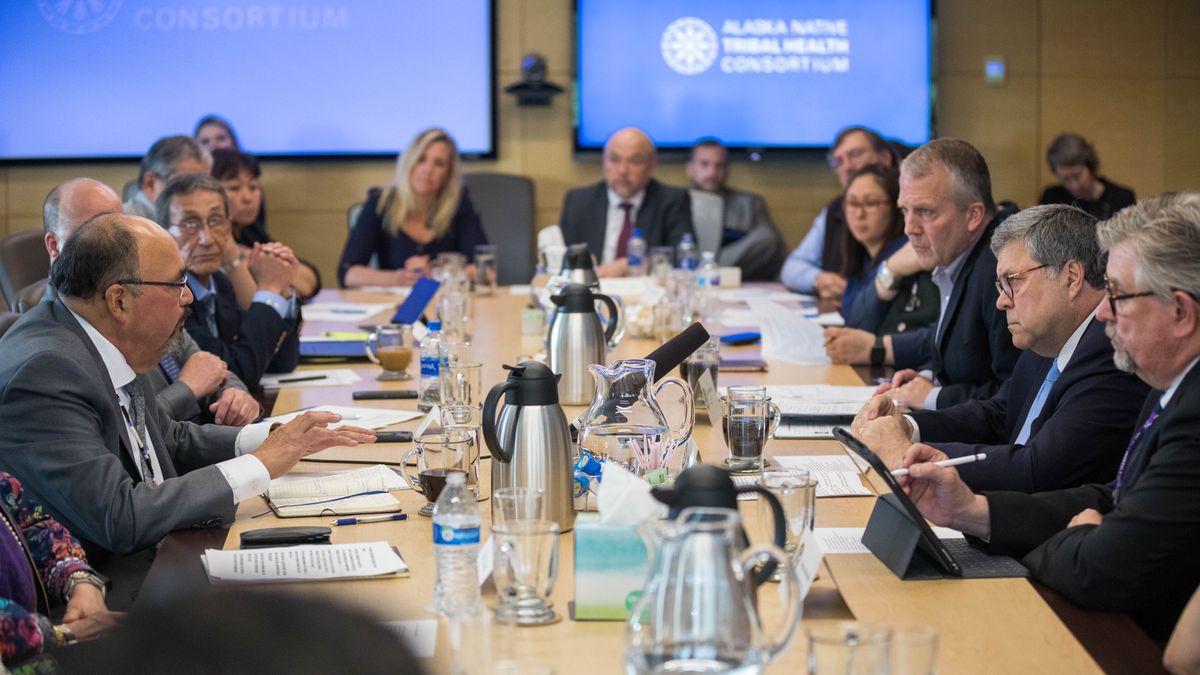 Alaska Native leaders on Wednesday called on U.S. Attorney General William P. Barr for federal aid and tribal authority to prosecute certain crimes, saying that a dangerous lack of law enforcement is growing worse in the state’s most remote communities.

Barr, in Alaska for four days to learn more about the problems, said during his confirmation process earlier this year that he was struck by the challenges facing public safety in Alaska, with its vast, hard-to-reach regions. On Wednesday, speaker after speaker, representing more than 200 Alaska tribes, described how crime in rural Alaska has raised alarms with the number of state-funded Village Public Safety Officers at or near an all-time low.

In Anchorage on the first day of his visit, Barr sat at a long table at a tribal health facility listening to 13 Native leaders from every region, many of whom had flown in to describe a crisis of rural sexual assault, violence and drug use. He said he would work to provide greater security in rural Alaska through his power at the Department of Justice.

“It’s the responsibility of the attorney general to serve all the people of the United States, every state, every community,” Barr said. “It’s critical our legal system work for every American and no one be left out of that.”

Barr, sitting beside U.S. Sen. Dan Sullivan, R-Alaska, heard that the state and federal governments have failed to provide the resources needed to combat the problem. Sullivan began the meeting by referencing a recent Anchorage Daily News and ProPublica investigation that found that at least 70 Alaska communities — towns and villages large enough for schools and post offices — had no local police of any kind at some point this year. In some hub communities that do have police, survivors of sexual assault say rapists go unpunished. Mothers of Alaska Native women who were found dead under suspicious circumstances say cases go unsolved.

[Lawless: One in three villages have no local police]

On Wednesday, Native leaders told Barr how a handful of local village safety officers are employed in regions the size of large states. They described long waits for Alaska State Troopers to arrive from hub communities, especially when storms ground planes.

Leonard Wallner, a coordinator of the village safety officer program for the Chugachmiut region, described one village in Southcentral Alaska that was in a lockdown status, with villagers gripped in fear for their lives after a 2017 homicide. As people hid inside, the suspect walked the streets, he said.

“Troopers did arrive, 23 hours later,” Wallner said. “That is unforgivable, but not at all uncommon.”

“You said six peace officers in how many villages?” Barr asked, leaning into the table.

The number of Village Public Safety Officers, police who are trained, certified and funded by the state, has dwindled from more than 100 officers in 2012 to 42 this year. Ralph Andersen of Bristol Bay Native Association said that more VPSOs are in danger of quitting because of uncertainty over the future of the program. Gov. Mike Dunleavy proposed removing $3 million from the VPSO program budget this year due to job vacancies, although legislators rejected the cut.

Richard Peterson, president of the Central Council of the Tlingit & Haida Indian Tribes of Alaska, drew chuckles from Barr when he said the meeting was so important he’d canceled his post-winter trip to Hawaii to be there.

Peterson said there are people in his region who feel like the state is more concerned with investigating hunting violations than homicides.

“I’ve heard elders that I love and respect say they feel that a Tlingit means less to the state of Alaska than a moose," he said, describing the killing of a 19-year-old woman in one village where, he said, it took nearly a day for investigators to arrive.

As a young man, Peterson said he was held at gunpoint in a Southeast village by someone high on methamphetamine. “It took troopers six hours to get there,” he said.

Barr plans to head next to Galena, in the Interior, and Napaskiak and Bethel, in Southwest Alaska. He’s also meeting with officials in Anchorage.

Regional leaders on Wednesday asked for more federal funding — including money to build jail cells and police officer housing, and for refinement of programs that provide grant funding for hiring tribal police. The federal Department of Justice has awarded $3.4 million to 13 Alaska tribes and regional organizations to hire and support police officers over the past three years, but recruitment is a hurdle at all levels of Alaska law enforcement.

Many village and tribal leaders, including those in Chevak, Igiugig and Iliamna, said they are working to establish tribal courts, according to a Daily News survey of every tribe and traditional council. Regional leaders told Barr that Alaska’s tribes need more power for these local courts to solve their own problems, a step requiring congressional approval. Other speakers described a lack of rural prosecutors and prisoner re-entry programs to help prevent recidivism.

Victor Joseph, the Tanana Chiefs Conference chairman, said that a provision in the Violence Against Women Act, as passed by the House, is a good start: It would create a pilot project that would allow up to five villages to enforce criminal jurisdiction over domestic violence and sexual assault cases.

“I stand here as an Alaska Native man in front of Alaska Native women. Our children, our grandchildren, to say, ‘Enough is enough,' " said Joseph. "We can’t rely on the state of Alaska to protect us. We need something here (so) that we can stand up for ourselves and help our own.”

Barr promised a follow-up meeting and called for continued communication with the Native groups. A second meeting will force the Department of Justice to “get our act together” and properly respond to the ideas he’d heard, Barr said.

Heather Dingman, with the Arctic Slope Regional Corp., told the attorney general there is no full-time state prosecutor in the North Slope region, so some cases aren’t being pursued. The lack of consequences for perpetrators means some women in villages must return to their abusers, just to ensure children have a roof over their heads, she said.

Gail Schubert, with the Bering Straits Native Corp. in Nome, asked Barr for federal funds to help process a massive backlog of kits to gather forensic evidence from victims of sexual assault in the region.

Stepped-up law enforcement in villages could help stop the drugs before they hit the ground in villages, he said. One speaker called for drug interdiction services at checkpoints like post offices and airports.

While some federal funds are available to address the problem, it’s often not enough, some said. In some cases, tribal funding within the Department of Justice is not being distributed.

Federal funding to rehabilitate drug addicts and criminals is also needed, they said.

Meanwhile, village safety officers are hard to retain. They’re paid very little and limited housing is available in villages. Good ones are often snatched up by the state troopers to serve in a handful of rural hub communities.

“All our communities have a housing shortage,” said Lucy Nelson, mayor of the borough government in Kotzebue in Northwest Alaska.

“Imagine calling for help in an emergency and knowing help is hours away, and weather dependent,” Nelson said.

Barr said he wants to make sure “one-size-fits-all federal policies” are not hurting Alaska Native communities, where tribes are governed by unique federal laws.

Gov. Dunleavy on Wednesday said he welcomed the attorney general’s visit, calling it a potential springboard for finding ways to improve public safety across the state. He planned to meet with Barr on Thursday to discuss a variety of crime-related topics that have plagued the state for generations.

“Alaskans have a proud history of discussing things unfiltered with their officials, and I think that’s a good thing,” Dunleavy said.

Dunleavy spokesman Matt Shuckerow said the governor has made public safety the top priority of his administration, and is committed to working with all groups statewide to improve law enforcement services across Alaska.

Alaska Public Safety Commissioner Amanda Price told the Daily News earlier this month that the state and regional organizations that oversee VPSOs are entering new agreements that will reduce training requirements for new recruits — a change that is aimed at making the jobs more appealing to rural applicants who might not want to leave their hometowns during hunting or fishing seasons.

Barr did not take questions from reporters. His visit to the state came on the same day that special counsel Robert Mueller delivered his first public statement on the Russia inquiry. Mueller said he was not confident that President Donald Trump “clearly did not commit” obstruction of justice. Critics have accused Barr of glossing over that finding.