Rain briefly calms wildfire near Fairbanks, but hundreds of structures remain in danger 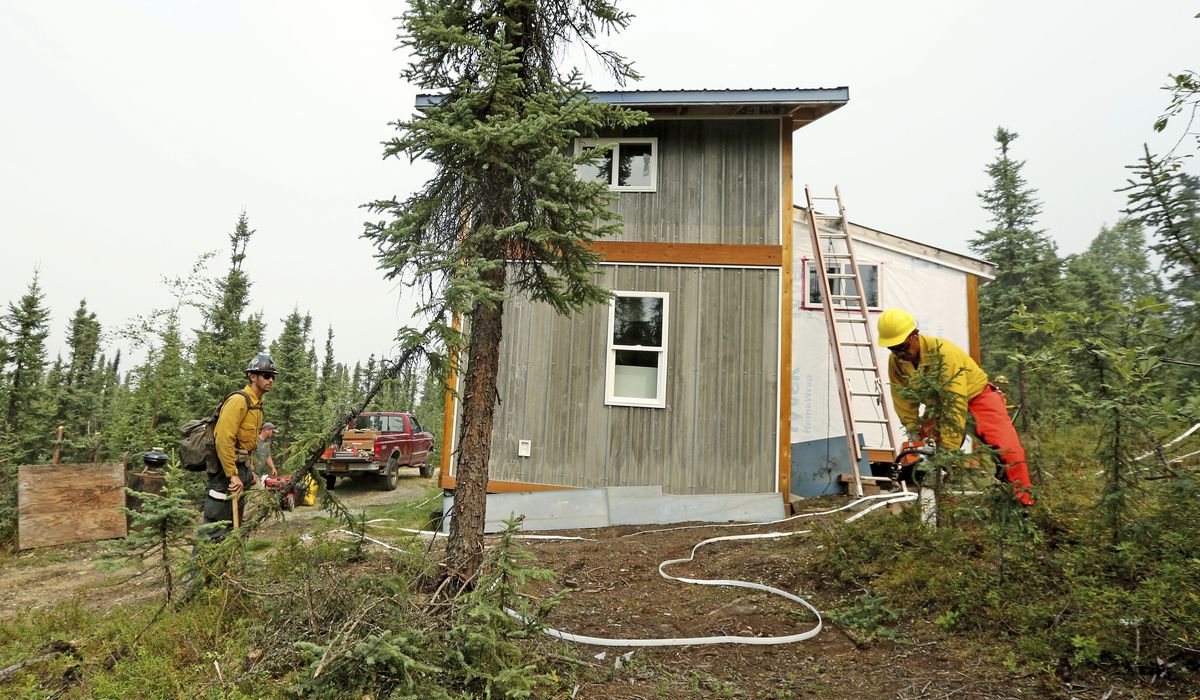 Members of the Southwest Crew 1 clear trees and line out sprinkler hoses at a home during a Level 3 Evacuation Notice for the Martin and Perfect Perch subdivisions in Fairbanks, Alaska, Sunday, June 30, 2019, as firefighting crews continue to fight the Shovel Creek wildfire off of Murphy Dome Air Force Station. (Eric Engman/Fairbanks Daily News-Miner via AP)

Members of the Southwest Crew 1 clear trees and line out sprinkler hoses at a home during a Level 3 Evacuation Notice for the Martin and Perfect Perch subdivisions in Fairbanks, Alaska, Sunday, June 30, 2019, as firefighting crews continue to fight the Shovel Creek wildfire off of Murphy Dome Air Force Station. (Eric Engman/Fairbanks Daily News-Miner via AP)

PALMER -- Even as rain briefly calmed a wildfire near Fairbanks, officials warned of nearly 250 properties facing potential evacuation if conditions worsen -- and they were expected to.

The Shovel Creek Fire about 20 miles northwest of Fairbanks was estimated at more than 10,600 acres as of Monday morning after being started by lightning Friday. Flames jumped fire lines Saturday amid smoky skies that barred aircraft from dropping retardant, prompting the evacuation late Saturday of two subdivisions with a little over 50 structures.

More than 200 residents gathered at a community meeting Sunday evening to learn more about the fire burning uncomfortably close to homes.

“We’ve had forest fires before. This is one we’re really talking about our community, our neighborhoods,” Fairbanks North Star Borough mayor Bryce Ward told the group. “It’s a little bit different from a cabin out in the woods.”

The fire was expected to kick back to life as sun and wind returned Monday, officials say.

As of Monday, the fire was threatening 36 private properties with structures to the north on the Chatanika River, according to an update. The closest was less than half a mile north of the fire. By midweek, 145 structures in the Murphy, Lincoln, McCloud, Perfect Perch, and Martin subdivisions could be threatened.

A Type 1 management team was en route from the Pacific Northwest, said incident commander Norm McDonald of the state Division of Forestry.

McDonald said locals should be prepared for expanded evacuation areas and people throughout Interior Alaska should be ready “all summer long" to move if necessary.

“This is going to be a long one,” he said of the Shovel Creek Fire. "It’s not something we’re going to put out in the near future. It’s going to take a season-ending event

Crews headed into subdivisions with engines, hand tools and bulldozers. Along with state and federal wildland crews, others were helping protect properties.

Mandy Nauman and her husband over the weekend started moving belongings from their 600-square-foot dry cabin in the McCloud subdivision, one of several currently on a Level 2 evacuation notice: Residents should be prepared to leave fast.

Nauman, driving into Fairbanks with another load Monday morning, said their 11 sled dogs were already set up at Trail Breaker Kennel where she works.

At home, fire crews were building fuel breaks and setting up sprinklers as helicopters thrummed overhead.

“We pulled into our driveway yesterday and there was five firefighters cutting brush and cutting trees around our house," she said. “It’s a little weird not knowing what’s going to happen next.”

Several other major fires were burning in Alaska, including the 70,000-acre Swan Lake Fire on the Kenai Peninsula and a fire that started Sunday evening near Lake Louise but was quickly corralled with aerial water drops.

The Lake Louise fire was contained to about 45 acres by Monday by a team of smoke jumpers, four air tankers and four water scoopers from Palmer, according to an update. Eight smoke jumpers arrived at the fire at 9:45 p.m. and worked until 2 a.m. containing the fire.

Hot, dry conditions prompted the continuation of burn suspensions for Fairbanks, the Kenai Peninsula and the Mat-Su, state officials say. In Anchorage, a burn ban is in place that prohibits all outdoor fires -- bonfires, campfires, debris burning, fireplaces -- except for barbecue grills and enclosed pellet grills.

The state also suspended fireworks sales and use in the Fairbanks North Star, Kenai Peninsula, Matanuska-Susitna, Haines, Juneau and Kodiak boroughs. The fireworks suspension also includes the Copper River Valley from Glennallen to Valdez, the Tanana Valley north of the Alaska Range and the Municipality of Skagway.