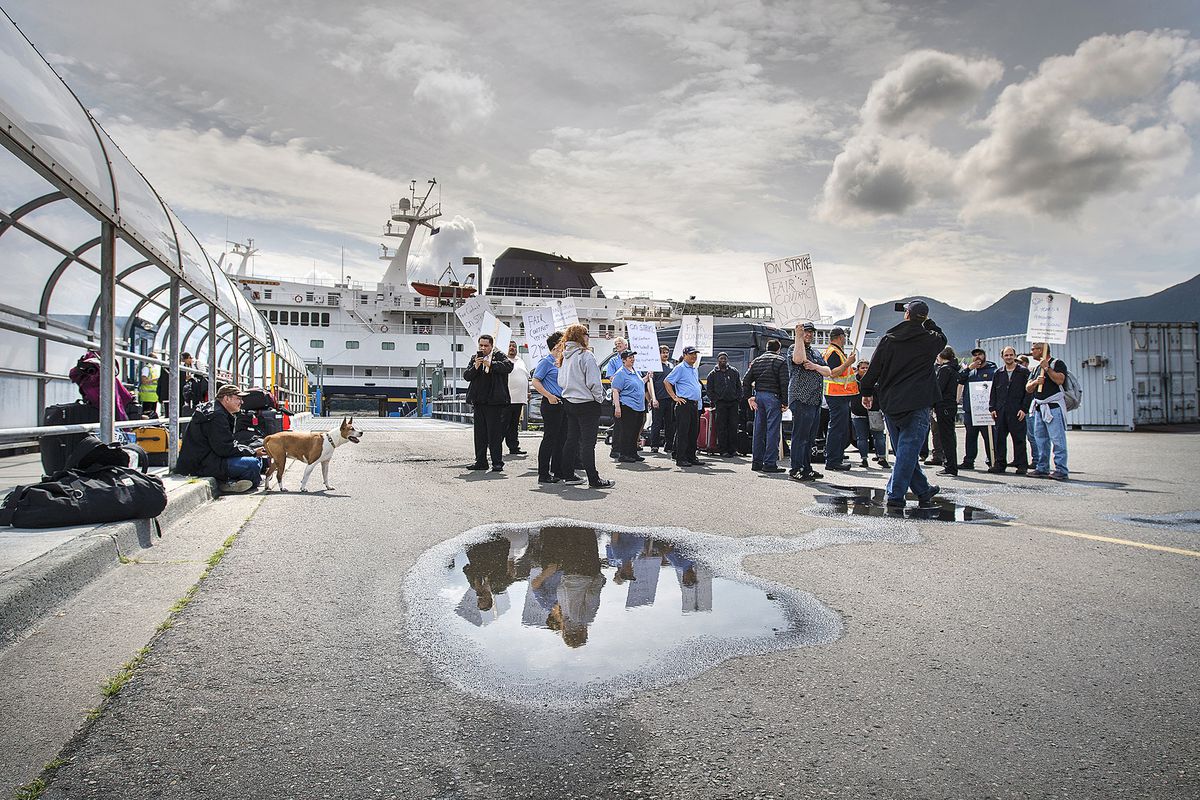 Some of the crew from the Alaska Marine Highway System ferry Columbia assemble for an Inlandboatmen's Union of the Pacific strike after failing to reach agreement on a contract with the state of Alaska, Wednesday, July 24, 2019, in Ketchikan, Alaska. (Dustin Safranek/Ketchikan Daily News via AP)

Some of the crew from the Alaska Marine Highway System ferry Columbia assemble for an Inlandboatmen's Union of the Pacific strike after failing to reach agreement on a contract with the state of Alaska, Wednesday, July 24, 2019, in Ketchikan, Alaska. (Dustin Safranek/Ketchikan Daily News via AP)

This story has been updated. Read about the latest developments here.

JUNEAU — The Alaska Marine Highway System stopped all sailings Wednesday after a decision by its largest union to strike following the failure of contract negotiations with the state.

Members of the Inlandboatmen’s Union of the Pacific walked off the ferry Columbia, moored in Ketchikan, shortly after 2 p.m., and other ferry workers followed suit as their ships reached port.

“The state doesn’t want a work stoppage, and we don’t believe a strike is necessary,” said Department of Administration commissioner Kelly Tshibaka. She said the state views the strike as illegal and could suspend or fire striking workers.

Stranded passengers are having their tickets refunded, said John MacKinnon, commissioner of the Alaska Department of Transportation, and the state is trying to find alternative transportation for those who were partly through their route as the strike began. MacKinnon said stranded vehicles will be transferred to private shippers, such as Alaska Marine Lines. The state is reaching out to passengers to make sure they are taken care of, MacKinnon said.

“We don’t want to strand them like the IBU,” he said.

Meadow Bailey, special assistant to MacKinnon, wrote by email that “the state is not paying for airfare, but passengers can use the ticket refund to pay for any additional travel.”

The state’s ferries will be tied up dockside until the strike is resolved. The Marine Engineers’ Beneficial Association and the Masters, Mates and Pilots Union also represent Alaska ferry system workers. Neither of those groups is involved in the current dispute but will not cross picket lines unless permitted by IBU, representatives said by phone.

In the state Capitol, observers worried about the effects of losing a vital transportation link at the height of the summer tourist season. State ferries also deliver chilled fish from processing plants to market and perishables from the Lower 48 to communities off the limited Alaska road system.

“I hope they don’t (strike) because that will cripple many communities’ economies. Juneau, Anchorage, the whole nine yards,” Rep. Louise Stutes, R-Kodiak, said Wednesday morning, before the strike began.

In a Wednesday morning meeting with news media, union officials said they did not want to strike, but after years of failed negotiations, they felt that they had no remaining options.

“We have tried and tried to work with the state, but we’re just beating our heads against the wall,” said Robb Arnold, a ferry system purser and vice chair of the IBU’s board.

“We don’t want a strike. That’s our last resort,” he said.

The union said in a statement late Tuesday that it also has concerns about significant budget cuts to the state ferry system.

The IBU, which represents about 430 workers in the ferry system, has been working under a series of interim agreements since 2017, when its last three-year contract expired. Negotiations under former Gov. Bill Walker failed to result in a long-term agreement, and mediation under Walker and now Gov. Mike Dunleavy has also not resulted in an agreement.

The IBU said in its statement that it has rejected a “package of harsh measures proposed by governor Dunleavy’s administration."

Marina Secchitano, president of the Inlandboatmen’s Union of the Pacific, is normally based in San Francisco but was in Juneau on Wednesday. She said that in recent months, the administration had backed away from 31 tentative agreements on various parts of a new contract.

None of those agreements involved the contract’s “economic package” — pay and benefits. The union and state have remained apart on those issues, despite the efforts of a mediator.

The union is seeking a three-year contract with a 3% raise each year, Secchitano said. In addition, the union is asking the state to pick up any increases in health insurance costs and to eliminate rules that pay out-of-state workers less than in-state workers.

Secchitano said those rules incentivize the state to hire Outside workers.

“When there’s an advantage to not hire Alaskans because they can pay less, there’s a problem,” she said.

They also said that as an alternative, they would be willing to see ferry workers paid under the same merit-and-step system as other state employees. That system provides automatic pay increases for experienced state employees.

“I think what we’re asking for is totally fair. They’ve given some unions more and some unions less" than what the IBU is requesting, Secchitano said.

Tshibaka said in a call with reporters Wednesday afternoon that the union’s statement isn’t accurate. She described multiple offers made by the state of Alaska to the union. One of those deals, a three-year arrangement offered under the Walker administration last fall, would have included a 5% raise the first year, and 2% raises the subsequent years. The union declined that offer.

Tshibaka said that when a federal mediator was brought in to settle the issue at the beginning of the summer, “their opening negotiations were 12% over three years.”

“They were walking further and further away from us,” she said.

She said it would be a “dereliction of duty” on her part to give the IBU something in the short term that would “imperil the state in the long term."

“IBU wanted a lot more than the other two marine unions,” MacKinnon said.

“I can’t give disproportionate benefits and rewards to IBU,” Tshibaka said.

In a letter sent to the union July 23, the Department of Administration said it believes that if a strike took place, it would not be protected by state collective bargaining law.

“If the strike is unprotected,” Tshibaka wrote, “as you are likely also aware, each and every striking employee (or one, or some, or all of them) would be subject to summary termination from their employment with the state.”

She confirmed that interpretation by phone but said the state does not want to escalate the issue through its system of resolving labor disputes, or through the court.

Secchitano said the union is acting legally and could challenge the state in court if it tries to claim an illegal action.

The strike is the first by the IBU’s ferry system members since 1977. That strike lasted for 20 days.