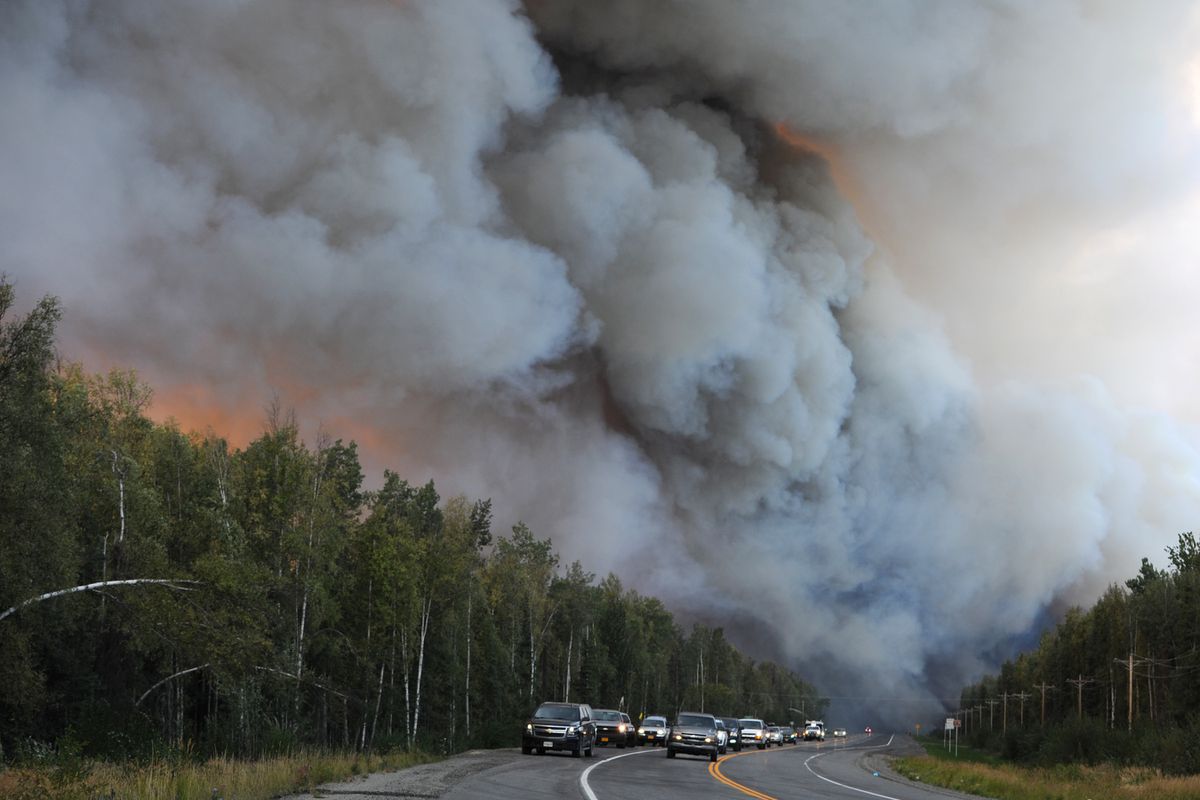 Motorists head south after turning around on the Parks Highway as strong winds advanced the McKinley fire on Sunday, Aug. 18, 2019. (Bill Roth / ADN)

Motorists head south after turning around on the Parks Highway as strong winds advanced the McKinley fire on Sunday, Aug. 18, 2019. (Bill Roth / ADN)

This story has been updated. Find the latest updates here.

Monday morning update: Fifty or more structures burned Sunday in a fast-moving wildfire in the Susitna Valley north of Willow, the Alaska Division of Forestry said.

“At least 50 structures have burned,” said Tim Mowry, a spokesman with the Division of Forestry at 11:25 p.m. on Sunday.

One lane of the Parks Highway was open with pilot cars Monday morning in the McKinley fire zone north of Willow between Mile 71 and Mile 99, authorities said. There is still heavy traffic and long delays, and the road could be closed again at any time, said Alaska Department of Transportation spokeswoman Danielle Tessen.

“We’re telling people to avoid travel in that area,” Tessen said Monday just before 8:30 a.m. “It is open now but we don’t know what it will look like in an hour.”

DOT recommends people take the Glenn and Richardson highways between Anchorage and Fairbanks instead, she said.

Mowry said he didn’t immediately have any information on which structures had burned. The fire took a devastating turn when it jumped the highway between miles 85 and 88, he said.

There was no immediate word on whether anyone was injured.

The fire started Saturday afternoon when wind blew a tree onto a power line near Mile 91 of the Parks Highway, the Division of Forestry said in an online update.

“Alaska Division of Forestry and Matanuska-Susitna Borough personnel are still working to account for residents who chose not to evacuate their homes or go to an evacuation shelter,” the update, posted early Monday, said. “Forestry, borough and Red Cross officials are working to determine how many structures were lost but specific details about structures that burned are not currently available.”

Pilot cars are leading 50 vehicles at a time through the 28-mile stretch of highway between Willow-Fishhook Road up to the Montana Lake area, said Tessen. It’s taking 50 cars about an hour to get through, she said.

“There is zero visibility with active flames on both sides of the road,” agencies said in a blog post on the state’s fire information website. “Be on the lookout for firefighting personnel and equipment on the roadway.”

“Other homes in area are still threatened,” Mowry said.

The McKinley fire, a fast-moving wildfire north of Willow, burned across the Parks Highway Sunday night, triggering widespread evacuations of subdivisions north of Willow and closing the busy highway.

The McKinley fire and the Deshka Landing fire both sparked on Saturday, stoked by high winds that barrelled through the Sustina Valley over the weekend.

After relatively slow growth Sunday, the McKinley fire was moving fast by Sunday night. The Division of Forestry urged residents in the area of milepost 82 to 91 to immediately evacuate their homes.

“The wind-driven fire is moving very rapidly and the situation is evolving,” a statement from the Division of Forestry said.

Officials had not confirmed that any structures had burned as of late Sunday night, but videos shared on social media showed some roadside structures in flames.

The Parks Highway was closed Sunday night at milepost 70 as of 8 p.m. Sunday. Division of Forestry officials said a northern closure was pushed from mile 91 to mile 99, the Talkeetna Spur Road cutoff.

Both the Deshka Landing fire and the McKinley fire threaten many homes and cabins. Officials had not confirmed the loss of any structures as of Sunday night, according to Tim Mowry, a spokesman for the Alaska Division of Forestry. The fires are scorching forested areas dominated by black spruce.

They come at the end of what has been a summer of record-breaking heat in Alaska, including a dry and warm August -- usually one of the rainier months of the year. Parts of Southcentral Alaska, including the Willow area, meet the federal classification of severe drought.

At least five wildfires broke out in the Mat-Su Saturday afternoon amid gusty winds, said Mowry. Officials say they haven’t investigated the cause of the fires but downed power lines are suspected. By Sunday, several of the smaller fires in the Mat-Su had been contained, according to fire officials.

Winds also sparked growth of a fire to the south. On Sunday, the active-again 100,000-acre Swan Lake fire closed the Sterling Highway, creeping closer to the community of Cooper Landing.

The decision was made in part because of the possibility that Parks Highway closures would strand buses and schoolchildren, said district spokeswoman Jillian Morrissey.

“We want to keep kids off buses and help to keep highway clear,” she said.

On Sunday night residents of the large Hidden Hills subdivision were ordered to leave as the McKinley fire advanced.

Iditarod musher Wade Marrs lives in the subdivision. He said he decided to pack up his kennel and evacuate a day earlier, on Saturday night. The fire is burning only 2 miles north of his home, he said.

“There’s only one road in and out of our neighborhood. Our subdivision is pretty big -- we made the choice to evacuate pretty early because the fire only has 2 miles to travel before we’re blocked in.”

Marrs said it took about 40 minutes to pack up his dogs and gear. He and his wife are staying with a dog lot in Willow for now. They left huge tanks of water around their home.

“We just put as much water around the structure as we could,” he said.

The Deshka Landing fire, west of the Parks Highway, grew to between 600 and 1,000 acres and was moving southeast, the Alaska Division of Forestry said in an update Sunday.

Around 10 a.m. on Sunday, the Matanuska-Susitna Borough advised property owners in the Red Shirt Lake area to evacuate due to the risk posed by high winds.

“People currently at Red Shirt Lake and the surrounding areas are instructed to evacuate the area out of an abundance of caution,” the borough said in a post on its Facebook page.

Nancy Lake Parkway was closed at mile 2.2 to stop people from entering the area, according to the borough. The area includes popular public use cabins and other recreational areas within the Nancy Lakes Recreation Area.

Winds of 20 mph or higher kept some helicopters from flying over the fires, making it impossible to drop retardant or water, or to measure an estimate of fire size, Mowry said.

“A lot of is dictated by these winds,” Mowry said. “That’s the number one driving factor for these fires.”

Fire crews from the Lower 48 are en route to Alaska to help with the Deshka and McKinley fires, Mowry said.

About 20 firefighters were working on the Deshka Landing fire as of Sunday morning, with a new crew from Tok scheduled to arrive later in the day, the Division of Forestry said.

On Saturday night, about 40 people spent the night in shelters established in Willow and Talkeetna, Matanuska-Susitna Borough officials said Sunday at a briefing. A shelter for fire evacuees had been moved to the Menard Sports Center in Wasilla by Sunday night, the American Red Cross said.

“We’re just not out of this,” said Vern Halter, the Matanuska-Susitna Borough’s mayor. “I don’t see any rain in the forecast for many days to come.”