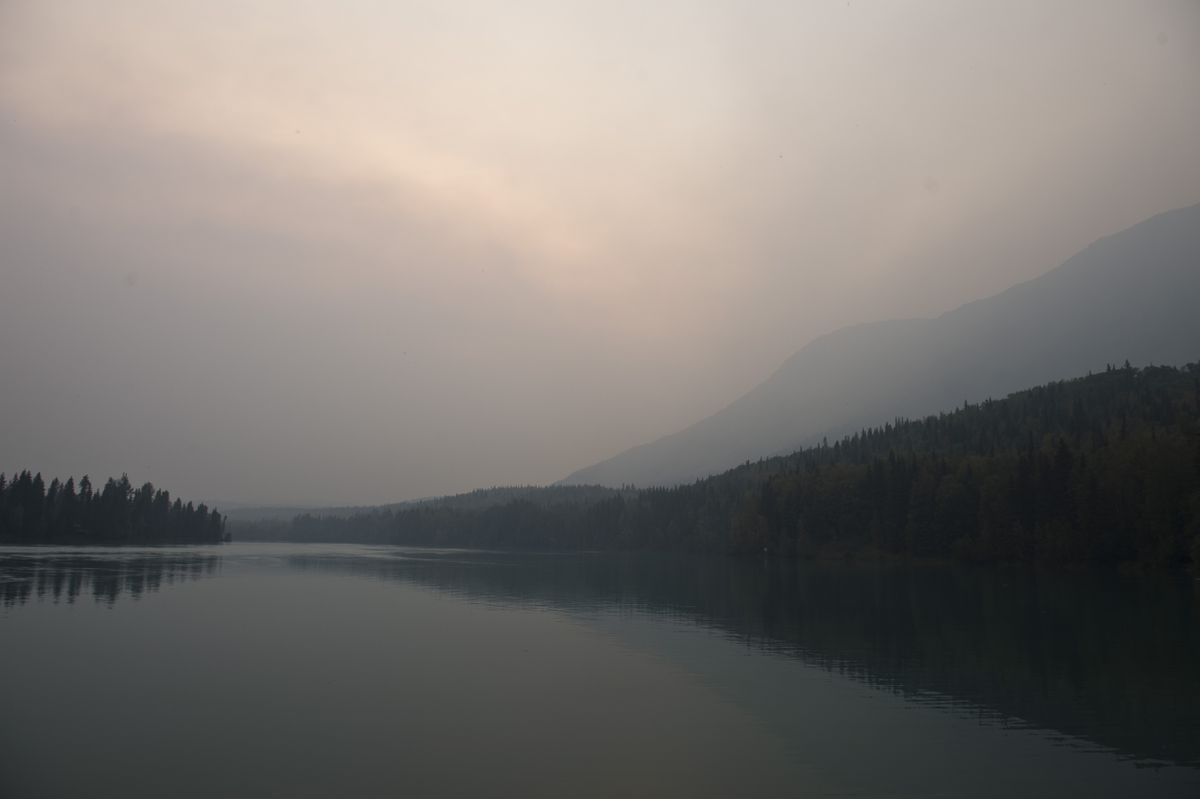 Cheryle James was packing up her home in Cooper Landing on Tuesday, preparing for the worst.

She wrapped valuables in quilts made by friends. She gathered artwork, some clothes and a few cookbooks so she wouldn’t lose all of her recipes if the massive Swan Lake wildlife burned through the community and destroyed her home.

She said she wanted to be ready to leave, but she didn’t have plans to go just yet. She wrestled with that uncertainty.

“Do we go? Do we stay?" said James, who also owns the Wildman’s convenience store in town. "Are we going to lose everything?”

After roaring back to life this month, the Swan Lake fire had torn across 158,042 acres by Tuesday — almost 250 square miles — and was just 20% contained. It burned about two miles from Cooper Landing, the Kenai Peninsula community that straddles the Sterling Highway along the Kenai River. People in the community were told Monday night to be ready to evacuate at a moment’s notice, and that warning remained in place Tuesday.

But many had already left on their own.

Cooper Landing, typically still busy this time of year, was like a ghost town, some said.

There were no boats on the Kenai River. Businesses had closed. Neighbors had packed and left. Hardly anyone was on the roads except fire crews.

By Tuesday, 635 firefighters were working on the fire. For some, that meant cutting down trees and clearing brush. Helicopters dumped water on the flames, focusing on protecting cabins and keeping the fire from moving farther south toward Cooper Landing, said Rocky Gilbert, operations section chief with the incident management team.

“That has been very successful so far today,” he said.

Among those who had already left Cooper Landing by Tuesday: The hundreds of people from the Kenai Princess Wilderness Lodge. The lodge had preemptively moved out visitors and staff Monday. The decision to leave was voluntary, fire officials said.

“At any point there is a situation when we get to the ‘Set level,’ they would automatically bring in buses,” said Bud Sexton, Kenai Peninsula Borough public information officer.

Meanwhile Tuesday afternoon, Dusty Byrd-Coulliette, an owner of Alaska Troutfitters, said she was “packing the sentimental stuff” in case she and her husband Billy Coulliette needed to evacuate. The smoke was so thick that she wore a mask while sorting through their belongings.

“It’s been really tough,” she said. “It kind of puts things in perspective.”

Barbara Gayer, an owner of Eagle Landing Resort in Cooper Landing, said she thought a lot of people left town Monday evening. Gayer wasn’t leaving yet, although her trucks were packed.

“If it gets to us, it’s really out of control,” she said.

By Tuesday afternoon, Gayer said, the wind had shifted, lifting the morning’s dense layer of smoke.

The Swan Lake fire had smoldered in a period of near dormancy before strong winds whipped it back up earlier this month.

Vince Beltrami, who lives in Anchorage, is building another home in Cooper Landing, and was readying the property Tuesday in case the fire approached. He and his family set up sprinklers, cleaned out brush and sprayed down the house.

The house was only about a week away from being finished, and his daughter is supposed to be married on the property in less than a month, said Beltrami, president of the Alaska AFL-CIO.

“So we don’t know if it’s going to happen or if the house is going to burn down, basically,” he said.

Standing on the home’s roof Tuesday morning, taking a break from hosing it down, Beltrami said all he could hear was the buzzing of chainsaws and the crunching of bulldozers nearby. The thick smoke nearly blocked out a red-colored sun. It was eerie, he said.

“It’s scary, but it is what it is,” Beltrami said. “We have hoses all over the place, sprinklers going. I don’t know if it’s futile, but it makes you feel a little bit better. You might have a chance.”

Fire officials will host the next community meeting at the Cooper Landing School on Wednesday at 6 p.m. They encouraged people to not travel far for the meeting. It will also be streamed online and on KSRM 920 AM, they said.

Correction: An earlier version of this story incorrectly attributed the quote, “I’ve been here 11 years and this has never happened,” to Barbara Gayer at Eagle Landing Resort. That quote was from an employee of the resort.